Tim Hicks Interview: We speak to the Canadian artist about how his influences range from Nirvana to The Eagles, how he’d love to visit the UK and much more!

Here at Six Shooter Country we want to help widen your music collection and that’s why we’re always keen to introduce new artists to you.

Welcome Tim Hicks, whilst not technically a newbie (his debut album ‘Throw Down’ was released in 2013) he’s yet to reach this side of the pond, much to many of his hard-core fans disappointment!

Sally had the pleasure of catching up with the Canadian to find out more about his music, his karaoke preferences, and why he hasn’t toured over here yet! 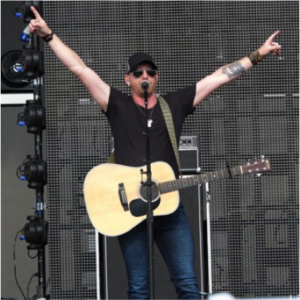 You’ve referred to your music as a mix between AC/DC and Eric Church and we know your parents were big fans of classic rock. With that in mind, who are your inspirations in music and how did you fall into country music?

I love all kinds of music, especially classic rock and country-rock.  I’m not sure why, but from an early age I gravitated towards groups like The Band, The Eagles, The Stones, even when the biggest thing going was Nirvana and the grunge movement.  It became apparent to me in my 20’s that what I loved about those groups and those songs were the country tendencies.  The harmonies, the song-writing, the guitar playing; these were the ingredients that really rang true to me.

You always seem to be on tour and, from what we can see, your shows are full of energy.  Do you have a favourite place to play?

Playing live is what I love to do.  It’s where I come from.  Prior to having any songs on the radio, I was a working musician 5-6 nights a week for years and years.  The shows are what make everything else worth-while to me.  That being said, I’ll play anywhere there’s a stage and a PA. That said, I sing pretty loud, so I could probably do without the PA.

Your most recent single, What a Song Should Do, has moved fans with its meaning. I understand musically it’s 4 chords but can you explain that lyric? Traditionally isn’t it 3 chords and the truth? How did you go about writing that track? (I think it could well become an anthem for you)

Haha, yeah the expression is three chords and the truth, but my song has four chords in it.  It didn’t seem right to say three chords and then play a fourth.  A little artistic license is in order I suppose.  The lyric wrote itself.  Once Karen Kosowski, Emma-Lee, and I worked out the concept for the song, all we had to do was get out of the way.  We tried to capture all the emotions and feelings that music and a song should do to you when you really listen.  We were looking for that feeling you get when you hear a really great song for the first time and it makes the hair on the back of your neck stand up.

If you had to get up and sing at karaoke what would be your go to song? Can we expect to see any of your songs released to sing on karaoke?

My go-to karaoke song is “Wanted Dead or Alive” by Bon Jovi.  I love that song!  Once again, a rock song with country tendencies- jangy 12-string guitar, great lyrics and melody… Love it!  I hope my music makes it to Karaoke nights all around the world.  I’m not sure what has to happen in terms of the business and politics to make that a reality, but I would welcome it.

You seem to be happy being a big fish in a little Canadian pond, with Loud topping the charts last year. Your peers like Lindsay Ell and High Valley have already toured here. Are you planning to release tracks in the U.K. first or just come over and introduce us to your music in person?

That would be incredible.  I love the U.K., I’ve been there many times and would love to come back to perform and tour there.  I suppose I would need some sort of distribution or record deal there- can you help? 😉

The U.K. audience have very much warmed to Kip Moore and Drake White in recent years and, being a big fan myself, I can say it’s more than just their music that tipped the scales. They’re seen as “nice guys” and very engaged with the U.K. fan base. They take time to play after shows and we remember Kip spending literally 2 hours to say “Hi” to each and every one of his C2C fans a few years back.  What would you like people to think of you that will set you aside to a new and fresh audience?

I’m cut from the same cloth as those guys.  I really enjoy meeting new fans and chatting.  That’s the best part of the job really- getting to meet all kinds of fascinating people all with one thing in common- a love of music!  I would hope the fans in the U.K. would feel the same about me, given a chance to meet them.

In a previous interview you said you “like recognising fans from social media and can say ‘hello’ to them.” You have a strong presence online with your social media (As an overseas fan of yours I think it’s great to see what you’re up to) Do you see this as an important part of being an artist nowadays? What is your feeling generally about social media and do you have a favourite platform?

Social media has become a huge part of what we do as artists.  I’m more of a “say something when I have something to say” sort of guy, rather than a “post just for the sake of posting”.  I think it’s a very exciting and useful tool to connect with fans in this day and age. Twitter used to be my favourite platform, but lately I’m really enjoying Instagram.

You have said that your most recent album New Tattoo is about having fun and being true to yourself. What do you like to do to have fun when you’re not behind a guitar or microphone?

I have two little ones at home, so I love to spend time with them and my wife when I’m not doing music.  Family is so important to me, which is one of the big reasons we chose not to move to Nashville.  Most of mine, and my wife’s family live close by, so we spend a lot of time with them and rely on them when I’m on the road to help with the kids.  We camp in the summer months and play a lot of family board games in the winter.

As life unfolds we often change our dreams to fit with our friends, partners or children. Here you are, a great musician with chart topping success. If your school careers adviser was sat with me now, what would they say you were destined to be all those years ago? Are you living the dream or has life after school steered you in a completely different direction?

I heard a thousand times from a hundred people that I should become a teacher, but I always wanted to be a professional musician.  I believe it’s something that chooses you rather than you choosing it.  Many people in my younger years tried their best to steer me away from such an unpredictable and difficult path.  In hindsight, I appreciate their concern and understand it, but I’m also glad I was just stubborn enough not to listen.  I’m definitely living the dream.

You’ve been busy touring and promoting the release of your latest album New Tattoo for some time now. What can we expect for the future? Do you have your sights set on world domination?

Haha- world domination?! Maybe not, but I definitely plan on continuing to play and create music.  Honestly, it seems to me that it takes a lifetime of work, dedication, and a touch of luck just to break through the entertainment business.  Hanging on and staying relevant is a whole other trick. I hope I’m able to do what I do and keep people interested for years to come.  That would be my definition of success. 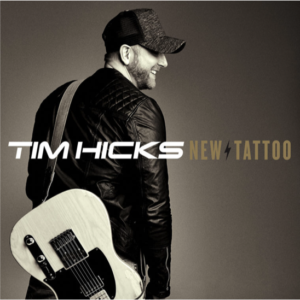 Take a listen to Tim’s most recent album ‘New Tattoo’ and let us know what you think!