Six Shooter Country writer Alison Dewar pays a personal tribute to Glen Campbell and talks about her obsession on what would have been his 83rd birthday (April 22).

That was back in the day before the internet was invented, when fan clubs meant writing letters and receiving all the news on your beloved star every quarter, rather than every day via social media. A shout out then, to Ann and Diane (hopefully I have the names right) for all their hard work.

My Glen obsession began in the mid-1970s with just one random Greatest Hits album among the many and varied choices in my parents’ radiogram (ask someone older if you don’t know what this is).

Through the fan club I found a penfriend in the US, Eleanor Kreuser, who kept me up-to-date with happenings Stateside and I spent all my pocket money on posters and LPs, while being almost literally glued to the TV for his weekly BBC 2 show. Even then a budding journalist, I used to keep notes about what he wore and the songs he sang – not that I was obsessed or anything. And yes, I do still have them.

I pestered my folks until the big day finally arrived and we had tickets to see Glen at the Royal Festival Hall in 1977 and I even dragged along my friend Carole. 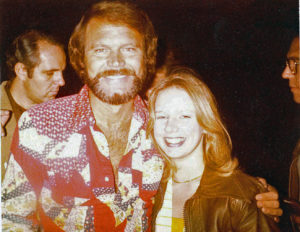 On stage with the Royal Philharmonic Orchestra and joined by Jimmy Webb, it was a truly fabulous gig, topped off by Glen playing the bagpipes for Amazing Grace at the end, as he was wont to do.

All the favourites were there, Dreams of the Everyday Housewife, Wichita Lineman, Gentle on my Mind, personal favourite Southern Nights, Rhinestone Cowboy of course, and a heart-rending version of MacArthur Park, which still moves me to tears today.

A Beach Boys mix-up was followed by an Elvis medley and, listening to the album again recently, I realised that when Glen referred to hoping Elvis would follow in his footsteps and come to England, it was just a few months before Elvis died.

The partnership of Glen Campbell and Jimmy Webb was unassailable and, having seen Jimmy last year at the Roundhouse, the magical man of words still works wonders. Perhaps one day he will bring his show The Glen Campbell Years to our shores.

The 80s was a whirl of gigs, including the Portsmouth Country Music Festival – the first time I met him and Carl Jackson, banjo player extraordinaire (and the furthest I’d ever driven from Essex in my little Ford Escort Mk I); the Dominion Theatre – buy one ticket for the early show and stay inside so you see the second show for free; the Barbican – backstage passes and a meet and greet for free; Fairfield Halls, Croydon – think I still have the poster for that one.

I remember the Barbican was the first place I met Kim, was by his side all these years. 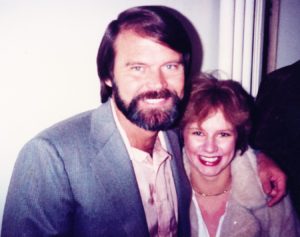 Sadly, the late 80s/early 90s were a Glen-free zone as far as concerts were concerned as I was overseas, but normal service resumed in the late 90s, including a memorable night at the London Palladium. Memorable both for the great concert and for the very long wait in the cold to see Glen afterwards, only to find out he had enjoyed the ‘green room’ hospitality perhaps a little more than usual. My dad was not impressed with his daughter’s determination to stay to the bitter end.

That aside, Glen was one hero who was always happy to say hallo and have photos taken, even when I ‘accidentally’ found him in a VIP airport lounge as I ‘happened’ to be passing through.

Yes, there were trials and tribulations – the drinking and the drugs, being arrested, the four wives, the Tanya Tucker episode – nowadays it seems we are much more ready to take the moral high ground at the drop of a hat when our stars misbehave in any shape or form. Then we just shrugged our shoulders and put it down to artistic temperament.

The last time I saw Glen was fittingly, back at the Royal Festival Hall, (yes, with my folks) when his Alzheimer’s diagnosis was out in the open and Ashley and her brothers lent a guiding hand. 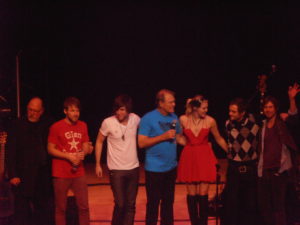 Ever the master craftsman on the guitar and with his beautiful melodies undimmed, it was a touching final display and one which both brought back – and made – so many memories.

Very fitting then, that I am spending this afternoon with that same girlfriend Carole, who I used to drag out from school at lunchtime to go and stare at the latest Glen album cover in one of the local shops. Yes, I had the LP, but how much more fun to go and gaze at it some more.

And for those who are wondering, it was By the Time I Get to Phoenix. I still haven’t made it there yet, Nashville got there first, but you never know…

Thank you Glen for all the memories, and to Ashley, who continues the family tradition in style and who I met at last year’s The Long Road, here’s to making much more fantastic music. 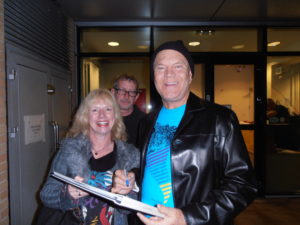