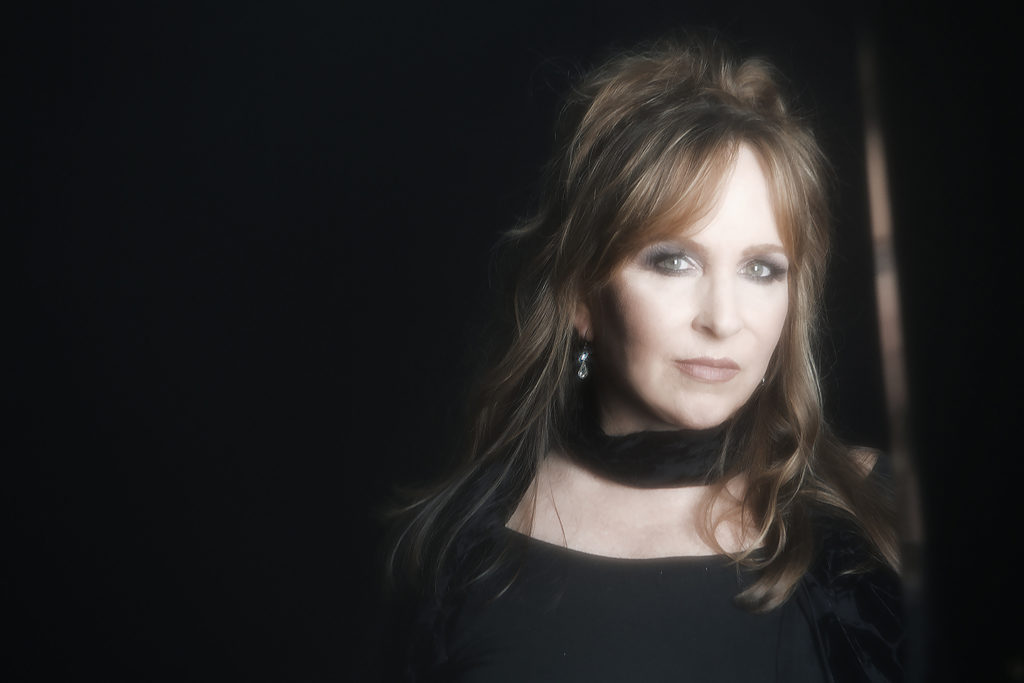 Described as one of her generation’s most compelling singer/songwriters, Gretchen Peters has written hits for Shania Twain, Neil Diamond, Trisha Yearwood, Patty Loveless and many more. A regular visitor to these shores, Peters has been playing gigs nationwide in April. Six Shooter Country’s Alison Dewar reviews her concert at The Apex, Bury St Edmunds.

After all the chatter (literally and metaphorically) about talking at gigs, listening to Gretchen Peters on stage for her Strings Attached UK tour at The Apex last week, you could have heard a pin drop. There might have been notices urging the audience to make plenty of noise as the concert was being recorded, but this was still a very restrained affair.

That’s not to say the clearly faithful and very respective audience – roughly two thirds of whom replied in the affirmative when asked if they’d seen her at the same venue before – didn’t enjoy the evening.

Listening to the interval conversations and reading the Facebook posts afterwards, the accolades came thick and fast. The folk in and around the Suffolk market town are obviously more than a little in love with this Nashville-based singer songwriter, Grammy nominee and member of the Nashville Songwriters Hall of Fame. For a first time Gretchen attendee like me, I wasn’t sure what to expect. Yes, I’d listened to the music and loved her voice, but as we all know, seeing someone live can be very different.

Choosing such a small, intimate venue as The Apex was the perfect introduction. With a vase of flowers adding a very personal touch on stage, Peters shimmered in her silver sequin coat before she and her band (Barry Walsh on piano, Colm McLean on guitar and Conor McCreanor on bass) cracked off the evening with the haunting veteran’s song When All You Got Is A Hammer, from her 2015 award-winning album Blackbirds.

Disappearing Act was followed by my personal favourite Wichita, its powerful words telling the story of a 12-year-old’s battle to keep her little sister safe. There were certainly no complaints when Wichita had to be replayed just ahead of the encore thanks to some unwelcome feedback on the first rendition.

Peters’ style is stripped back, raw and melodic and the purity of her voice lends itself beautifully to the most majestic of songs.

The soulful smoothness of Say Grace, from her 2018 album Dancing With The Beast, was simply stunning; while The Matador, where she was joined on stage by Seonaid from the accompanying Southern Fried String Quartet, a group she first collaborated with at Perth’s Southern Fried Festival in 2018, attracted some of the biggest applause of the night and delivered a real ‘wow’ factor.

Fellow Quartet member Alice brought her cello on stage for the song Five Minutes, before Idlewild finished off the first half.

During the break there must have been some behind-the-scenes tweaking going on as when Peters returned to the stage, this time joined by the full Quartet line-up, the sound was just that bit smoother.

Lit with simplicity by just two spotlights, Peters began the second half in style singing Arguing With Ghosts, moving on to Hello Cruel World and the Secret of Life – the latter giving full voice to the Quartet’s mix of two violins, a viola and a cello.

The hymn-like Revival with its beautiful piano intro was followed by Love That Makes A Cup of Tea, drawn from a dream Peters had about her late mother; before she moved on to play Blackbirds, the album title track that won International Album & Song of the Year from the Americana Music Association UK.

When You Love Someone, from The Essential Gretchen Peters album, was written with Bryan Adams (who also featured on the track) and Michael Kamen, and first appeared as a soundtrack to Sandra Bullock movie Hope Floats back in 1998. Telling us that she normally plays the ‘folk’ version at gigs, this time Peters promised us the full movie version, with Walsh (who is also her husband) singing Adams’ part to perfection – and delivering a real crowd pleaser.

On A Bus To St. Cloud and To Say Goodbye rounded off the evening until the foot-stomping, whoops and cheers of the audience – plus a standing ovation – brought them back on stage for that ‘one more time’ rendition of Wichita and encore song When You Are Old.

There’s no doubt the crowd enjoyed themselves, they just had (compared to many other gigs) a quiet way of showing it – and how much more enjoyable it was to actually be able to listen to the music without constant chatter all around.

In summary, it was a real treat to hear this mistress of Americana for my first time – I’m sure it won’t be the last.