Our man Paul checked out Lanco in Birmingham on their debut UK tour. Here’s what he thought…

Worthy of a definite mention is their support, Bailey Bryan. To look at she appears to be a stereotypical, teenage American girl. However, despite her years, the few songs she performed were soulful and introspective. Hailing from Seattle, Washington she stood, just her and a guitar, entertaining strangers in a foreign land.

A cross between a sassy Maren Morris and a sweet Kelsea Ballerini she started with Watered Down. Her clear and vibrant voice offering the lyric ‘You like me like your whiskey’ but she’s clearly not watered down at all. She came across as a sincere ‘take me or leave me’ kind of girl.

She referred to an “alter ego” she wants to offer on stage, like Sasha Fierce for Beyoncé, implying the message in her song Steal your Girl isn’t something she would do. A fun tune, followed up by crowd involvement and Drake’s One Dance. Her next tune showed a mature darkness if that’s a thing? Hurt by life maybe? “Songbird” really drew in the crowd with the lyric ‘Oh, Lord, I don’t have the answers. I’m just a wanderer trying to find my place’. Almost haunting but I could see it struck a chord with many of us there.

Her final tune was her current single Perspective, the obligatory happy love song, but you know what? It was fun, it was uplifting and the whole crowd enjoyed Bailey’s short spot. Already I have her music on my phone. One to watch out for, I’m sure. 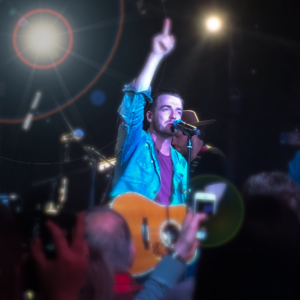 Ok. Now our main act; Brandon Lancaster’s five piece, “Lancaster & Company”. Of course, we know them as LANCO. I’ve seen these guys before and was looking forward to their set, however, being well aware they’re not “big” in the UK I still found myself asking ‘What is this stadium band doing on the top floor of the O2 Institute?’ It’s perfect for acoustic sets and poetry reading but when a full band kicks in the vocals can be lost and that’s exactly what happened I’m afraid.

That said, this is a review of the band’s show, not the venue and LANCO didn’t disappoint. Not one bit. They kicked off with Hallelujah Nights, title track from their debut album. The vocals invited audience “Woah-ing” and even early in the night we sang along.

Clearly Brandon was full of energy, he wanted to run about the tiny stage like a Duracell Bunny and Long Live Tonight gave him the perfect opportunity as he jumped around without missing a note. Slowing down a touch (probably to catch his breath) Brandon grabbed his six string for We Do then picked it back up with Win You Over and So Long (I Do). Somewhat reminiscent of a Maroon 5 kind of sound.

Singing At The Stars was amazing, with Brandon banging the big bass drum, quite literally, at the front of the stage. He introduced the band, Chandler, Jared, Tripp & Eric and proceeded to belt out Mr Brightside. Always a winner with any audience.

One thing these guys did well was constantly fill the air with sound and no real silence. It was slick, it was professional but they appeared to be loving every second like it wasn’t hard work. If Brandon wasn’t singing, Jared was playing keys, keeping it rolling. But, after performing their current single, Rival, everything came to a halt. Why? So they could climb over the barriers and jam in the middle of the crowd, of course. We heard Sold (Grundy County Auction), Drink In My Hand, Free Fallin’ and Springsteen before they returned to the stage.

They immediately cranked it with Brandon’s talents on the harmonica, Middle Of The Night was followed by Trouble Maker, which gave way to more crowd “woohoo-ing” , just when we thought it was over a storming instrumental break to an awesome crescendo. So good, so good. (Yes, I said it twice.)

They showed us just why they are worthy of their ACM Award for Group of the year and ended the evening with their two most well-known songs, Born to Love You and the encore was, of course, Greatest Love Story.

If you hadn’t heard them before I’m certain you would have been converted that night. If only by their stage presence, energy and fun times being had by all. Here’s hoping they grace our shores again soon with some new material.