We Chat to the Broadcaster About the Increasing Popularity of Country Music in the UK, His New Job on Country Hits Radio and Much More!

Baylen Leonard has become a household name for any country music fan in the UK, our writer recently Sally had the chance to chat to him, where he opened up on everything from the rise of country in the UK, making a new home in Britain and his music festival, The Long Road! 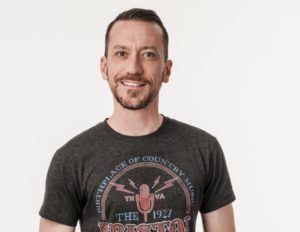 Country music is booming, how exciting is it for you to not just be involved, but to be very much at the forefront of it?

It’s a terribly exciting time, and I just picture myself as being part of it. Ultimately, I’m just a fan of country music, it’s great to see so many opportunities and for more and more people to be coming over. But, also that so many more homegrown artists are coming up through the ranks, and that people in general are supporting country music. The growing popularity just shows that there’s a groundswell of support there. Without the fans that wouldn’t be happening. So, I’m just excited to be part of it, it’s a big old movement and community, it’s a lovely thing to be involved in.

Do you think things like ‘Nashville’ the TV series has helped play a big part in moving the popularity of it forward?

Absolutely, a lot of time people mention that TV series and say that’s how they got into it. It’s also done a lot for people outside the genre, there’s obviously been people in the UK that have loved and supported country music for ages, but really ‘Nashville’the TV show is when it was in everybody’s front room all the time. Even if you weren’t necessarily counting yourself as a country fan, you were watching the show and appreciated it as entertainment but probably found yourself being drawn into the music. It also let people in to Nashville as a town and the country music industry. Certainly, in the early days of the show if you spoke to artists and people living and working in Nashville, they said how the producers had got a lot of the stuff just right.

Touching upon that show, there was two strong female leads, and Will Lexington the ‘gay cowboy’, at the time Chris Carmack said the he felt executives wouldn’t have given Will the time of day in real life. There’s a lot of talk at the moment about the possible lack of opportunities for females in country music, and Jimmie Allen has referenced how difficult he’s found it being one of the only black country artists, do you think we’re at a time where these minority groups are being represented more? Do you think country music is perhaps ready for a gay cowboy?

I hope so! I mean there must already be, in the same way there must already be gay professional footballers, they must exist, it’s impossible that they don’t. Certainly if you go to any country music festival or gig, either here or in the states, the audience is made up of all sorts of people, there are plenty of gay people there, there are plenty of people from all sorts of ethnic backgrounds, and minority groups if you want to call them that. Everybody is getting along and having a grand old time, and there’s no issue there. So, hopefully that will start coming through in terms of the type of artist we see.

I actually don’t think that it’s the fans that would have an issue with this or would even think twice about it, it’s the industry that’s worried about it. I talked about this with Darius Rucker when I interviewed him whilst he was over doing his Royal Albert Hall gig, and he was of the same opinion, when he was starting out people thought he was crazy and said it would never work; it wasn’t the fans that were saying that, it was the people in the industry. According to him it wasn’t even people that had a problem with those things in real life, it was more they were worried about it because it hadn’t been tested in that way as such.

Americana is a lot more open to that sort of stuff. Brandy Carlisle won all the awards going and she’s a very out and proud lesbian and makes no bones about it. Katie Pruitt has this wonderful song about her being in love with a woman and her being afraid to say it, it’s great. There’s lots of artists in the industry that are already gay, or already black, or already something other than what people assume a country music artist should be, so I think it’ll just take somebody to do that and everyone will just go ‘oh that wasn’t a big deal at all, it’s fine!’

Let’s find out a little bit more about the man behind the mic, where did it all start for you?

It started where I was born, in Bristol, Tennessee, it has a huge country music legacy, it’s called the birthplace of country music. The first commercial recordings of country music were done there in 1927, the Carter family literally came off a farm and came to record there, Jimmie Rodgers was the same and of course they went on to become country music royalty. So, I guess I grew up with this heritage built in, there was lots of live music events around, people just making music, it was simply a part of growing up. Even if I hadn’t specifically been in the birth place of country music just being in the South in America, country music is part of life. You’re just as likely to come out of high school and get into someone’s car with a country music radio station on as you are to have a rock station. It wasn’t really until I moved away from East Tennessee that I started realising how special that town was, or is, in terms of country music.

And what brought you here, why the UK?

Well I always wanted to live somewhere other than America, I left home when I was 18 and moved to New York City, I lived there for quite a few years, loved it and had a great time. I did my proper, ‘becoming an adult’ growing up there. It was the first time I’d ever been away from home and been in an environment that was a major city like that, the biggest city in America! The day I moved to New York City was the first time I’d ever been on a plane, it was quite a big move for me. After I’d been there for a while, I just wanted to see more of the world, I didn’t want to be an American that had only ever seen America, once I had a taste of different people and cultures in New York City I just wanted a little bit more of it! And the UK just kind of made sense, there’s always been a love affair between America and England, and I had several friends in New York that were from the UK, at that time (20 years ago) the process of getting a visa was pretty straight forward and relatively easy, I did it just at the right time, got my visa, got all my ducks in a row and just moved over. I thought, “well I’ll figure it out when I get there”.

And what a good job you did of it!

Thank you, it took a while, I really love being here. I’ve been here long enough now. It’s been almost two decades. I love it because I feel ingrained into the UK culture, the heritage of the music here, but also, because what I mainly do is country music, I still have a nice connection with where I’m from. So, I’ve got the best of both worlds really!

With the new radio station, how are you finding it? Do you find the audience response is different at all to maybe some of the more ‘purist’ shows you’ve done in the past?

I haven’t found that so far, maybe it’s there and they just haven’t told me! For the most part people are like me and are just excited that there’s another place to listen to country music. The thing is I love all sides of country music. I have no snobbery whatsoever about the different types of country, listening to the radio when I was growing up in the late 80s and through the 90s it was a mixture. At the same time, being in Bristol, I was getting a lot of Bluegrass at the weekend, and the neighbours were making music on the front porch or old timers were playing the banjo and the harmonica at family reunions. So, I’ve always had this wide view of what country music is, I’ve always incorporated those things into all of the shows I’ve done, and all the projects I’ve done. I’ve tried to show how broad country music is and recognise that country music is this living, breathing, evolving art-form and it will always take on new sounds and influences and continue to appeal to people that are just getting into the music now. Hopefully people will see that. I do still have my Front Porch show at the weekends on Country Hits in addition to my Monday – Friday show. I’m very involved with Americana and Roots music, so those genres will always have a platform in anything I do. But, brand new stuff that’s coming up today, that doesn’t sound like any country music I knew before, also has a place because I think, if you like one or the other and that’s what you’re there for then you hear the other one you think you don’t like, you’re probably going to find something for you in that one too, hopefully!

It’s an amazing experience and a great privilege to discover new artists.

Check back next week for part two, when Baylen tells us all about The Long Road Festival and more!