Kip Moore has recently been wowing audiences with his first fully acoustic tour, no big shows, no big guitar riffs, just him and his band stripped right back to what we love, the lyrics and the music.

Our writer Sally had the chance to catch up with him before he went on stage in Birmingham, with just a small amount of time to chat to the busy man here goes the Quick-fire round with Kip! 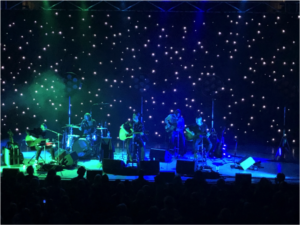 We’ve just been given a short slot, so we thought we’d do a quick-fire question round, that ok?

Sounds good to me!

None of the above, I’ve got to come teach y’all how to cook over here. I’ve enjoyed the Indian restaurants the most. Indian food has been my favourite. 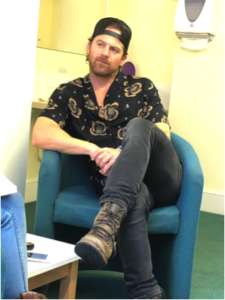 So what do you cook?

What’s your favourite food to eat when you’re on tour?

Do you prefer playing stadiums or honky tonks?

If you play one of too much, then you’re ready for the other. I don’t really prefer one over the other.

First gig you went to?

The Allman Brothers Band was my first concert I went to ever, I was 15 years old, and it was amazing.

The first one I ever bought was Bob Seger in The Silver Bullet Band ‘Greatest Hits’.

I love all colours of the rainbow! 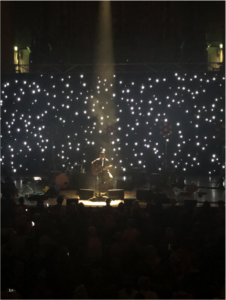 Mountains, they’re both incredible. Surfing is my favourite thing to do, but there is something that the mountains do for me that nothing else can do.

If it has to deal with food then I have to go with U.S all day long! Your food is just pretty bland!

But you do love coming over here right? Despite our bland food?

I do love coming over here, the fans are incredible, such a cerebral audience which I love. This is such an amazing place to play an acoustic show, this is definitely the place to do it, and I’ve had a lot of nights on stage when I just feel so grateful. I’ve dreamt all this stuff up, but to have it come to fruition and for crowds across the pond to know all my music it’s just truly a blessing. And as long as people continue to show up, I’ll continue to come. I’ll always keep coming.

Do you get something from the U.K fans that you don’t get in the U.S?

What’s your go to karaoke track?

Really? That is weird! You mean someone took it off for you to sign it?

Yep, it’s strange, very strange. I’ve signed a lot of strange things, a sock is just the first thing that comes to mind. I get a lot of odd requests to sign things, and things thrown at me. All sorts of odd things, you name it, it’s been thrown at me!

Tell me about where the inspiration came for ‘Hey Pretty Girl’?

It was from watching my guitar player Dave Lapsey, watching him change as a man once he got married and expecting a child. I watched the whole process from him expecting the child, trying to get his ducks in a row, to having the child, watching him facetime every night with his wife and kids. And just watching how that changed him, because I had only known him for so long before all of that. That’s how the song was written, it was written as me watching the two of them and how much happiness it brought the two of them.

Thanks for giving us the time to chat today!