Tell Aaron Watson that he’s a newcomer, ready to stick it to Music City and he’d smile and laugh. After all, this ain’t this cowboy’s first rodeo. The 41-year old has released over a dozen albums, hitting the number one spot for the first time with 2015’s The Underdog. Spend any time with the man and you’ll understand how he really means it when he says the number one’s are nice, but the opportunity to tell his stories, to please his fans, to provide for his family, those are the real wins – and, boy, can you feel it on Red Bandana. 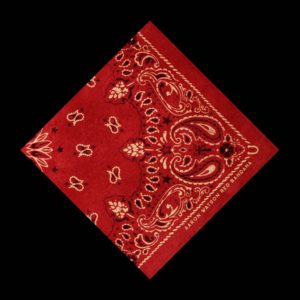 The art of the song is celebrated throughout this 20 song, entirely self-penned collection (yes, that’s right, a country artist with an ENTIRELY self-written record). From the album opener, the story-driven Ghost of Guy Clark, where Watson chats to the legendary songwriter and learns a thing or two about writing good songs and how being number one on Music Row does not make a good song. “You gotta make em feel what you feel, help em dream a dream and make em wonder… find the passion in a four letter word or a Sunday morning amen… he flicked his ashes and he pointed at my heart, said if you’re searching for solid gold, that’d be a real good place to start”. The lyrics in this song are so rich, so meaningful and deep. You know you’re in a real album from the off.

After the stunning instrumental El Comienzo Del Viaje, Watson says it himself during the outstanding, western-soaked Dark Horse, “I’ve got a chip on my shoulder, but it doesn’t weigh me down” and that message is consistent through the album. This stadium-ready song is the anthem for anyone who’s been told they’re not good enough. Watson explores the same idea a few times across the record with songs like Live or Die Trying, just like Fencepost and The Arrow on previous releases,he tells his own story to inspire others.

Whilst Watson has an incredibly inspirational story to tell when it comes to finding success against the odds, he’s at his finest as a songwriter when the loving family man in him comes out. His ability to craft a tender ode to someone he loves is god-given. Heartstrings, a song for his adoring daughter Jolee Kate, is a father’s love bottled up and spread over four minutes. The same can be said for Country Radio, a tribute to Watson’s parents and a slice of nostalgia. To Be The Moon is wistful and dreamy, Watson’s husky vocals the perfect accompaniment.

When it comes to reminiscing, there is no higher high than the utterly gorgeous Riding With Red. This is country music like we haven’t heard in an age, soaring strings compliment a tear-filled tribute to an old friend, maintaining their memory and holding dear memories. There is always comfort in Watson’s words, just to speak to him is comforting, and this song is truly beautiful. It flows seamlessly into Red Bandana, an extension of the thought and a commentary on the song. As Watson says of his friend’s old red bandana he says “what I wouldn’t give to have him here wearing it now”. Aaron – you’ve preserved the memory of your friend in the most beautiful way.

With every heartfelt tune on the record there’s also some good ol’ honky tonkin’ foot stompers. The likes of Old Friend, Burn Em Down and Shake a Heartache are rocking country music at their best. There’s a song for every mood – Red Bandana could make up the Billboard Country Top 20 and still offer way more variety than the current pile. Trying Like The Devil is a song made for the road, as Watson questions what it takes to be a good man and how we negotiate life whilst maintaining this standard.

Whether Aaron Watson hits number one or not is irrelevant. Sure, it’d be the right thing to happen for such a stunning collection of music, but it’s not necessary. We could sit all day and talk about how this is country music done ‘right’, how Nashville needs to get it’s sh*t together and take a hint, but we’d be wasting our energy. Nashville is what it is. Aaron Watson realised that and made peace with it long ago. This record may speak proudly about overcoming rejection and hardships, but it’s moved on from laughing at Music Row execs like we did on The Underdog, this album is something else entirely. It’s another big step towards Aaron Watson being recognised as one of the greats. In 50 years, will people still listen to Red Bandana and feel the same love and passion towards the songs as today? I’m convinced of it. It’s 20 songs and over an hour of music – almost unheard of in any genre these days.

Aaron Watson is one of the hardest working men in music, he’s one of the kindest souls I’ve ever met (he offered to send me a piece of the family cactus from Texas for me to grow at home, all because I told him I like cacti), he’s a genuine, honest, hardworking father who loves his family more than anybody could fathom. He’s been through some lows that none of us could imagine and come out of the other side wearing his Red Bandana and kicking ass. He’s a country music legend already. He may be several albums deep, but this is just the beginning…

2 thoughts on “Aaron Watson – Red Bandana Album Review: The Vaquero is Back and He’s Not Slowing Down”