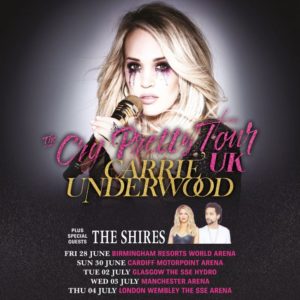 Thanks for casting your eye over my review of Carrie Underwood at Resorts World, Birmingham on 28th June. Now, if we approach this like a sandwich and eat the tough crusts first, we can get to the good bits in the middle straight after, I promise.

The venue was curtained off towards the back and, after stage changes and some customers’ seats were re-distributed prior to the gig, we still saw empty spaces. I was hoping the performance didn’t match the organisation because I was looking forward to a great show. So, love them or loathe them, The Shires started the proceedings with, to be honest, a lackluster routine. Perhaps better suited to a smaller venue, their sound and charisma just don’t cut it inside an arena. Making a point of reminding us they were here to “warm up the crowd” and “Carrie won’t come out unless you’re singing loud”, I cringed slightly at the pantomime mentality. However, their set was short and off they went.

What also didn’t help were the awful video screens at the back with a very noticeable delay, rendering them virtually useless to anyone other than photo opportunists that wanted a bigger subject to snap. It was akin to seeing an overseas news broadcast from twenty years ago. However, on with the good bit, like I promised. Coming on stage to Paradise City by Guns ‘n’ Roses were the band. All dressed in black, we had a drummer, keys, fiddle and various guitarists. Ok, got that? Good. The video was a montage of Cry Pretty images and then, BOOM, there she was. Dressed in a gold and glittery outfit, much like Reba would wear, with her golden hair let down, they went straight into Southbound. The poor video syncing still forced us to stare at the stage, so I guess it was lucky the venue wasn’t huge and we all had a fairly good view. 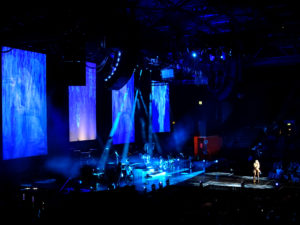 The next three numbers all blended seamlessly together. Cowboy Casanova, Good Girl and Last Name. Big, loud and powerful and that was just Carrie’s voice. I did wonder how she’d keep this up all night. We heard a few words from Carrie before she grabbed her guitar to strum a few chords while singing Church Bells. She was clearly here to deliver her songs to the crowd and not have a chit-chat. Fine by me as the arena went dark to Two Black Cadillacs and then Blown Away.

Where was she going from here? I’ll tell you where… Jazz. That’s where. With a sax, a double bass and some sassy Trilby hats we heard a song she was clearly and rightly proud of co-writing; Drinking Alone. The slick stage hands aided the transition to End Up With You, followed by the bigger Flat On The Floor and the long notes of Wasted.

Carrie then gave a short story of the road from American Idol all those years ago to where she is now and treated us to a medley of Temporary Home, See You Again, You Won’t and then Just a Dream mashed up with Aerosmith’s Dream On. Amazing, just amazing. Tears soon flowed from her rendition of the now classic Jesus Take The Wheel, and then more tears with The Bullet. Damn you Carrie for making the crowd feel so much emotion. Then, as if anyone wasn’t quite sure of Carrie’s devotion to peace, love and God, the roof raised when she sang Something In The Water. That was astounding. 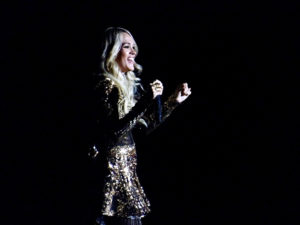 She gave us a few minutes to compose ourselves while she sang Low before throwing herself into Undo It and The Champion. A very lucky Birthday girl called Katy was invited on stage to rap the Ludacris part after telling Carrie of her daily fight with Fibromyalgia. I wonder when Katy will come back down to Earth? Bless her. Carrie’s final number was Before He Cheats and what a way to end the show. Even pop fans in the room knew this one and everyone sang along. Of course, it didn’t really end there and a few minutes later the stage lights came back on and we were treated to Cry Pretty and Love Wins, making sure the whole crowd left happy.

For me personally, the absolute highlight of the evening was Something In The Water and I remember thinking at the time, “If there’s folk that have come into this room on the fence about Country Music or God they would most certainly have no doubt whatsoever that we had just witnessed an Angel on Earth.” Her last note was as powerful as the first. She came here to sing and entertain and that’s exactly what she did. This took live concerts to a whole new level. Thank you, Carrie.

End Up With You

Flat On The Floor

Something In The Water