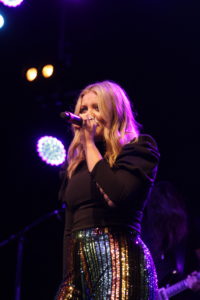 “Let’s light this place up” – fans of Dixie Fields debut headliner Lauren Alaina set the Essex skies alight with phones like fireflies on Saturday night as she closed the festival with a rousing version of The Road Less Traveled.

In a set packed with energy and sparkle, the ACM award-winning vocalist captured the crowd’s hearts with a wide-ranging set, from Georgia Peaches to Shania tribute Man I Feel Like a Woman; Ladies in the 90s and Three.

With three weeks in the UK ahead of her, this girl is looking forward to having a damn good time – catch her if you can. 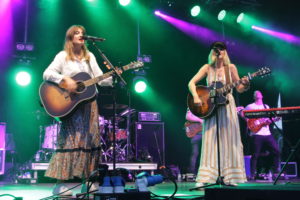 Preceding Lauren and bringing more of a mellow feeling to the early evening were Hampshire twins Lizzy and Catherine aka Ward Thomas. Cartwheels, No Filter and latest single Breathe In got the crowd going before they mixed it up with a singalong chorus for I Believe in You. 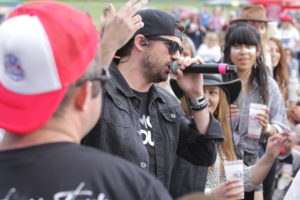 When it came to working the crowd however, the standout act had to be Jackson Michelson making his first-ever UK appearance – there must be more to come.

Michelson has honed his craft long and hard – this is a man who played 200 shows in one year – and it literally shows. Given he is a virtual unknown on these shores he ploughed straight in with a full-throttle gig that saw him jump the barriers and go line-dancing with the crowd.

Highlights included Bud Light Shine, Down by the River and latest single One at a Time, get that credit card ready for his return.

Coming soon…what Lauren Alaina is looking forward to most about her UK trip, why Africa holds a special place in the heart of Ward Thomas’s Lizzy (clue: there’s music and chimpanzees involved), and we get to the root of the banana phobia confession from Holloway Road’s Jack Cooper. All this, plus an interview with Jackson Michelson!