Just before Lauren Alaina stepped on stage in the Essex countryside to headline the first-ever Dixie Fields Festival, the award-winning and double-platinum selling recording artist took time out for a quick chat with Six Shooter Country.

How does it feel being back in the UK?

“When I got the call about Dixie Fields, I just couldn’t wait to come back to the UK. I played C2C in 2016 and I remember how excited and hungry the fans were for the music.

“I was a bit nervous about headlining a festival though – I thought, what if no-one comes!

“This time I’m here touring for three weeks and we get to travel around, I’m most excited about going to Scotland. I’ve been looking at pictures of Highland cows and can’t wait to see them, they look really cute.”

Tell me about your music past, present and future – you were very young when you started singing in iconic venues like Tootsies and Legends

“Singing was always my dream, I always knew I would be doing it, I don’t think my 13-year-old mind could comprehend it but I knew I was going to be singing. Thank goodness for being that little girl, she set me up pretty well.”

“Coming off of American Idol, everything was very fast paced. On my first album I didn’t really get to write any of the music, so for Road Less Traveled, it was important to do that. I went through a lot to make it happen – my parents’ divorce, my eating disorder, there were a lot of hardships.”

“I try to write from a really personal place and the new album will be a continuation of that style. I went through a pretty crazy break-up, I lost my stepdad to cancer. Now I’m newly in love and writing about that.”

“I just went into the studio to do some recording, last week we released Town Ain’t Big Enough with Chris Young. And I’ve got a duet coming out with Jon Pardi.”

Any other future collaborations lined up?

“I’d love to collaborate with Shawn Mendes or Morgan Wallen, I think you’re just getting to know him over here.”

You feel strongly about women on country radio

“There are so many talented women in country music – Kacey Musgraves is unbelievable, she has built a career without country radio and she won Album of the Year at the GRAMMYs.

“The women I grew up listening to on the radio were Dixie Chicks, Reba, Shania, Dolly, Aretha Franklin, Whitney Houston. Ladies in the 90s was a very up-tempo song about the lack of female presence on country radio. That’s really personal to me because my dream was to be on the radio.

“I still want that but it’s also about trying to make sure we are doing things outside of radio as well. There are only a few of us and I wish more of us could come over here where people love the music. We’re coming up with the ideas to getting music out there more and we’re trying to continually expand.”

You’re friends with contemporaries like Cam and Kelsea – do we feel a new supergroup Pistol-Annies style coming on?

Music aside, you have your charity My Kinda People, why is that so important to you?

“I have always been drawn to philanthropic work, I was raised in a way to help others. In the Enneagram (personality testing) I am a number two, which is a helper. I started volunteering aged eight or nine at the Special Olympics and as I got older I found other communities to work with and, in my times of need, people helped me. Now I like to find ways to help others.”

She certainly does, having wowed the crowd as night fell rapidly, the girl in the sparkly pants saved enough energy to meet as many fans as possible at the merch tent and made many more dreams come true. 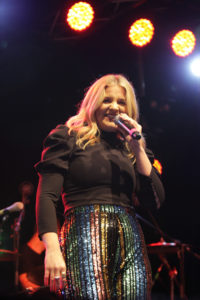