A few days ago, Georgie Thorogood announced that Dixie Fields Festival will be returning in July 2020 – great news for this fledgling event and even better for all of those that were there.

Perfect timing then to meet Jackson Michelson who took July’s inaugural Dixie Fields Festival by storm. In the last few years, he’s shared the stage with the likes of Lady Antebellum, Darius Rucker, Frankie Ballard and Blake Shelton. It’s no surprise then that the crowd went wild for the man from Oregon who thought nothing of jumping off stage to lead the line dancing, and whose music earned him plenty of new fans.

Six Shooter Country sat down with him shortly before his only UK performance – so far.

First time in the UK, first ever Dixie Fields Festival – give us your first impressions.

I love new experiences, I had always wanted to come to England, so when I was asked to play this festival, I said yes absolutely and we worked that calendar, no question.

We had one day in London doing all the tourist things – we went to Soho, Buckingham Palace and Westminster Abbey, it was terrific and I’m hoping to come back soon.

I didn’t know how much people loved country music here. The knowledge and the appreciation of country music is pretty incredible. I wanted to make this a special show and now I want to come back again. 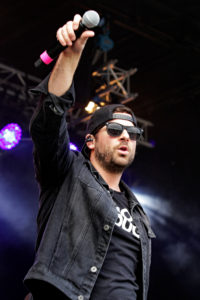 We were in the car and I was looking at my phone and got a real scare when I looked up, I forgot about you guys driving on the other side of the road. And I love the different terms you use, I now understand that a takeaway is what we call a ‘to go’.

I know when you arrived, you wanted to spend time with (festival organisers) Georgie Thorogood and her family, why was that important to you?

I love people, I am fascinated by culture and as to why people are the way they are. I love to make friends, it is really cool that they run this awesome festival. I am an artist, business is always better if you do it with people you like and enjoy, and it was fun to meet Georgie and Frank.

I spent an hour or so here at the festival on Friday night and met some people, they really appreciate the music.

Tell us more about your music career

Most people move to Nashville, they get a songwriting deal and grow up from there. They write a hit song and then they get a record deal…

I grew up in Oregon, I only knew the grunge scene in Seattle. I was working really hard every night, I played 200 shows a year on the west coast and I started with no fans and grew up selling out shows.

One of those people was Tim McGraw – I am a huge Tim McGraw fan – and Curb Records, they knocked on my door and I’m still with them now. (Jackson’s latest single Stay Over, was released on the Curb Records label a week after Dixie Fields). 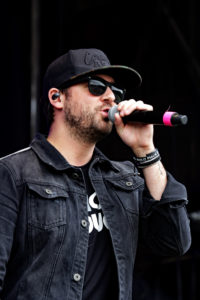 You’re a prolific songwriter, where does your inspiration come from

I co-write a lot. Last year, instead of playing 200 shows, I played 100 shows and I wrote 100 songs, collaborating with a bunch of great people in Nashville.

I said I would write more songs this year than I ever had done before and I just kept writing. Songwriting is like weightlifting, the more you do it the stronger you get and things flow out of you.

I get my inspiration from a lot of things, I married my high school sweetheart and my wife is my muse and my inspiration. I have three children, so there are lots of different stories and perspectives, and I meet so many people every year.

Garth Brooks said if I wrote about my own life people would be bored but if I could share other peoples’ stories, they will want to listen to the music and that’s true.

When you were younger, your brother had a record deal as a Christian artist and you were selling merch at his gigs. What role does your faith play in your life today?

My faith is a compass for me, it still impacts on songs I write, how I raise my children, etc., it is a filter through which I write and communicate.

Country music is an amazing thing – who would have thought that Jesus Take The Wheel would be a number one song?

Who are your heroes?

Collin Raye – he is a hero of mine. Back in the ‘90s, he stopped in my home town in Oregon with his brother. It was before he got a record deal and he played for tips. He ended up staying for 9 months and he headlined the county fair. It was the first concert I ever went to and I was just 5 years old. I was in the front row that night and I fell in love with entertaining. I took a picture that night and I still have it.

He signed a record deal with Nashville and he’s had 25 hits since then but we’re still in contact and I have opened up for him, so he’s a big hero.

Jackson, thank you for your time. Can we expect to see you again soon?

I certainly hope so, I’m already getting excited about it. 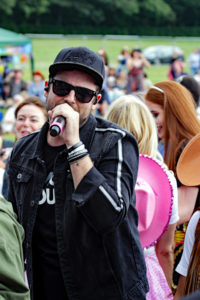 The Dixie Fields crowd certainly gave Michelson top marks as he wowed them with his energy and sheer delight at being there – “Are you ready to have a good time?” he asked before telling them: “I’m totally pleased to stand up here with the people who are running Dixie Fields for the first time – not many people get to experience this”.

My own highlights from his set included Down by the River, from the 2016 self-titled Jackson Michelson EP, a song he describes as very personal as so much happened at the river’s edge – being baptised …his first beer…his first kiss…

The interestingly-titled Bud Light Shine (I heard something completely different) got the crowd singing and dancing, but it was his cover of Tim McGraw song I Like It I Love It that sparked a frenzy as he vaulted over the barrier to lead the line-dancing.

Other hits included recent release One At A Time and brand new single Stay Over, about an on/off relationship that isn’t quite going to work out.

This was a man having fun and it showed. Social media posts described it as: ‘the moment the festival took off’, ‘awesome and amazing’ and ‘he’s set this festival alight’ – which pretty much summed up what it was like to be there.

“Thanks for welcoming me – a crazy American boy from Tennessee,” he declared, and with that he was gone… Come back soon.