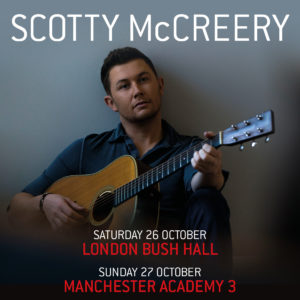 The country star builds on multiple #1 album success story with international tour dates including London & Manchester – on sale this Friday
At just twenty-five years old, US singer-songwriter and American Idol winner Scotty McCreery is already a multi-platinum recording artist with four US #1 albums and multiple chart-topping singles under his belt, and this October plans to take his music overseas with his first headline tour dates in the UK & Europe. Announced today, McCreery has added shows in London and Manchester to his previously announced German dates, including a headline show at Bush Hall on Oct 26th as part of Country Music Week:23rd Oct – Berlin, Germany – PrivatClub

Since winning Season 10 of American Idol in 2011, Scotty McCreery has become one of the best-known voices in country music and grown a dedicated worldwide fanbase, led by his huge success on the US album and radio charts, with over 3 million total album sales to date.

He co-wrote all 11 songs on his current album Seasons Change – out now on Triple Tigers / Sony Music – which has given fans a window into his life, and taken that success to another level, producing two Platinum-selling hits to date with the emotional first single “Five More Minutes” (watch the video here) and his latest #1 “This Is It,” which featured a video filmed at his wedding in June last year and has over 50 million views on YouTube. The album also features his current US single “In Between” (watch here).

ABOUT SCOTTY MCCREERY:
Scotty McCreery launched his recording career by making history in 2011 as both the first country artist and the youngest male artist of any genre to debut his first studio album, the Platinum-certified Clear as Day, at No. 1 on the all-genre Billboard Top 200 Albums chart, and in the last year has achieved new heights, earning two back-to-back No. 1 hits from his current album Seasons Change, which debuted at No. 1 on the Billboard Country Album chart: the RIAA Platinum-certified “Five More Minutes” and the RIAA Platinum-certified “This is It,” which stayed at the top of the charts for two weeks. He co-wrote all 11 songs on Seasons Change.All four of his albums have debuted at No. 1 on a Billboard Albums chart, with current combined sales surpassing 3 million copies. He’s earned one Gold and five Platinum singles; won the 10th season of “American Idol” in 2011; was named the ACM New Artist of the Year in 2011; won the CMT Music Award for Breakthrough Video of the Year (“The Trouble with Girls”) in 2012; American Country Awards for New Artist of the Year in 2011 and Breakthrough Artist of the Year in 2013; BMI Awards for writing One of the Top 50 Country Songs of the Year twice (in 2015 for “See You Tonight” and in 2018 for “Five More Minutes”); and the NSAI Nashville Songwriter Award for One of the Top Ten Songs I Wish I’d Written (“Five More Minutes”) in 2018. The North Carolina native released his first book, Go Big or Go Home: The Journey Toward the Dream, in 2016. For more information and his current tour schedule, visit ScottyMcCreery.com.