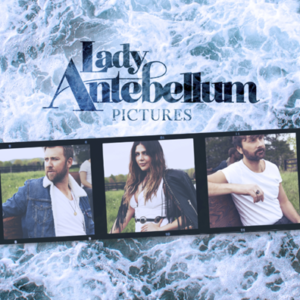 Multi-PLATINUM trio Lady Antebellum reveals a second track today, the lush “Pictures,” from their forthcoming debut album on BMLG Records due later this year. Following the record’s lead Top 25-and-climbing single “What If I Never Get Over You,” which already boasts over 45 million streams, the new track written by Dave Haywood, Charles Kelley, Hillary Scott, Sarah Buxton and Corey Crowder confesses to less-than-picture-worthy memories while looking back on a relationship. “Pictures” is now available at all digital retailers and Lady A will share an intimate exclusive performance of the song on VEVO today (8/9) at 12:00P CT. Fans can watch here – https://LadyAntebellum.lnk.to/PicturesLivePR

“We live in a world right now, especially with social media, where everyone’s lives can look happy and pretty,” said Lady A’s Hillary Scott. “We wrote this song to reflect on the reality that things are more complex than that. As good as something might look in brief moments, there are so many layers to who people really are and what’s really going on. I love the juxtaposition of how this song’s lyrics dig in while feeling laid-back and groovy.”

Known as “one of Country music’s most distinct bands that continues to carve its own path” (Joplin Globe), Lady A has road-tested “Pictures” during headlining shows throughout the country and have proven that “deep layers are definitely evident on the new cut” with its “breezy, bluesy sound,” (The Morning Call). After upcoming stops in Interlochen, MI, (8/9), Arcadia, WI, (8/10) and Sparks, NV, (8/17), the trio will return to Las Vegas for the final run of their first-ever residency, OUR KIND OF VEGAS. Their “expertly designed concert production” (Las Vegas Sun) held at the Palms Casino Resort’s Pearl Concert Theater will resume August 23.

Over the course of their decade-long career, Lady Antebellum has become one of the 21st century’s premier vocal groups, blending deeply felt emotions with classic country sounds. As a Country-radio staple, the trio has amassed record-breaking success with nine No. One hits while ushering in more than 18 million album units and 34 million tracks sold, with over 4 billion digital streams. Known for their 9X PLATINUM hit “Need You Now” which is the highest certified song by a Country group, they have earned ACM and CMA “Vocal Group of the Year” trophies three years in a row and countless other honors including seven GRAMMY awards, Billboard Music Awards, People’s Choice Awards, Teen Choice Awards and a Tony Award nod. For more information on new music and tickets, visit ladyantebellum.com.