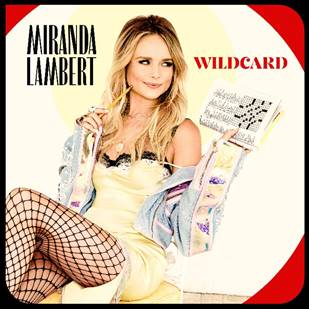 Miranda Lambert’s hotly anticipated seventh studio album Wildcard will arrive 1st November. “When people listen to this record, I want them to know that I see them and hear them,” said Lambert. “I feel you, because I’m just a girl from East Texas, writing about all the things that go on in my world and in the worlds of people around me. I want people to get along, you know, just be who you are, own it and move on from the moments you couldn’t live in.”

The Grammy Award winner celebrated today’s announcement by releasing the latest peek inside the project – “Bluebird,” which she co-wrote with Luke Dick and Natalie Hemby. The album also features “infectious” (Billboard), lead single “It All Comes Out in the Wash,” as well as recently-released “foot-stompin’ barnburner” (NPR) “Locomotive” and “crunchy, frisky jam” (Stereogum) “Mess with My Head.” Additional album details will be revealed soon.

Listeners can pre-order Wildcard and pre-add the album to their collections now. “It All Comes Out in the Wash,” “Locomotive,” “Mess with My Head,” and “Bluebird” are also available on all streaming platforms and digital retailers.

Lambert will hit the road for the Roadside Bars & Pink Guitars Tour this fall, with special guests Maren Morris and Elle King, as well as Pistol Annies, Tenille Townes, Ashley McBryde and Caylee Hammack on various dates (details below). Tickets are on sale now.

Miranda Lambert will release her highly anticipated new studio album Wildcard Nov. 1, which includes her latest country radio single, “It All Comes Out in the Wash.” This fall, Miranda will embark on her rotating, all-girl “Roadside Bars and Pink Guitars” tour featuring Maren Morris, Elle King, Ashley McBryde, Tenille Townes, Caylee Hammack, and the Pistol Annies. This follows two extensive tours in 2018, “Living Like Hippies” in the winter/spring and “The Bandwagon” summer tour with Little Big Town.

The most decorated artist in the history of the Academy of Country Music, Lambert is the recipient of more than 70 prestigious awards and special honors: 32 ACM Awards (including 9 ACM Female Vocalist of the Year Awards), 13 CMA Awards (Country Music Association), 2 GRAMMY Awards, the Harmony Award (Nashville Symphony), Artist in Residence (Country Music Hall of Fame), the ACM Gene Weed Milestone Award, and several others.

The acclaimed singer/songwriter released six studio albums that all debuted at No. 1 on the Billboard Top Country Album Charts, including the critically acclaimed double record The Weight of These Wings (2016), Platinum (2014), Four The Record (2011), Revolution (2009), Crazy Ex-Girlfriend (2007) and Kerosene (2005). In addition, she released three albums with her trio, the Pistol Annies.

Her clothing and cowboy boot collection, Idyllwind, is a private-label brand sold at all Boot Barn stores nationwide. www.idyllwind.com