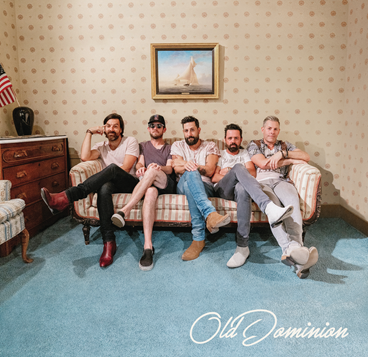 In conjunction with the album pre-order, Old Dominion will release album track “My Heart Is A Bar” today! The track was written by band members Matthew Ramsey, Trevor Rosen and Brad Tursi with Shane McAnally and Josh Osborne. Click HERE to listen!

Old Dominion frontman Matthew Ramsey said of the song, “’My Heart is a Bar’ might be the loneliest sing-a-long of all time. It’s a song about feeling alone and used and pissed off at love to the point of throwing up your hands and saying ‘screw this!’ That’s a feeling a lot of people can identify with. It’s lonely and liberating at the same time. That’s why we decided to treat this like a big bar-room-sing-along so we can all sing and say ‘screw this!’ together!”

Old Dominion has released two singles from the new self-titled album. The band’s most recent single “One Man Band” is a fan favorite with over 57 million streams. Click HERE to view their performance of the single on Good Morning America! The first single “Make It Sweet” reached #1 on Billboard Country Airplay and Mediabase charts, making it Old Dominion’s 7th #1 song. Click HERE to listen!

The band have also announced headline dates in the UK this autumn, as part of their world “Make It Sweet Tour”. The UK dates kick off on the 10th October in London at the Eventim Apollo and include Belfast, Manchester, Birmingham and Glasgow.

The UK dates are:

Old Dominion are Matthew Ramsey, Trevor Rosen, Whit Sellers, Geoff Sprung and Brad Tursi. Virginians Ramsey (lead vocals) and Sellers (drummer) knew each other from High School and met Tursi (guitarist) and Sprung (Bassist) in college. The band was completed by Detroit native Rosen, whom the others met in Nashville, where they each moved to pursue careers as songwriters (Ramsey, Rosen, Tursi) and session players (Sprung and Sellers). In Nashville, Ramsey, Rosen, and Tursi have enjoyed major success writing for other artists, collectively scoring an impressive string of hits (including seven No. 1’s) for such artists as Kenny Chesney, Blake Shelton, Dierks Bentley, Luke Bryan, Keith Urban, Tyler Farr, Sam Hunt, and The Band Perry.