Midland – Let it Roll Album Review: The trio return with the highly-anticipated follow-up to On the Rocks. 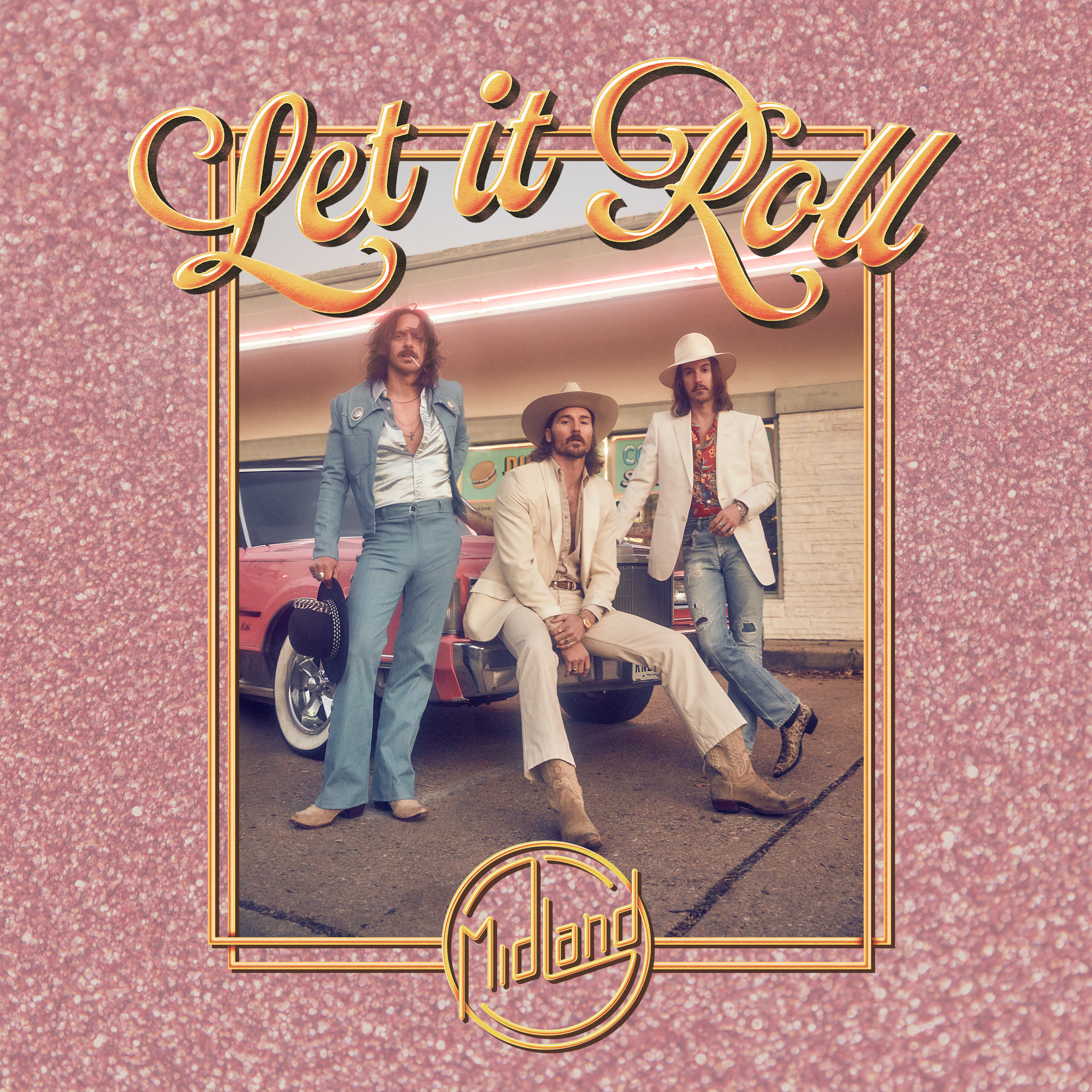 After the success of their debut album On the Rocks, Midland had set a high bar for themselves. Winning plaudits for their throwback sound, classic country honky tonk songwriting and charisma, it was always going to be a big ask to repeat, or even better, the feat for album two. We’ve seen it before, a great artist comes along with a ‘real’ sound, only to follow it up with a second album full of increasingly watered-down, pop infused, click track music (Read as: Thomas Rhett et al). So, with the announcement of their sophomore album, Let It Roll, there was a sense of anticipation. Would Midland stick or twist?

The resulting album is a joy to listen to. Kicking off with the anthemic title track, Midland set us off free and easy down the road. The band said this record is the story of the last couple of years of relentless touring, and that comes across from the first track right through to Playboys, a song about hitting the stage every night. Wailing slide guitars and a driving acoustic guitar, along with the band’s famous harmonies give this album an even stronger nod to the Eagles than its predecessor did. Long-time fans of the band will be pleased to hear Fourteen Gears make an appearance. The song, an old school trucker song, was one of the first Midland ever released. It’s been jazzed up for the album with a faster tempo and more harmonies, a little more of the Let It Roll gloss. Some will complain, if they do… they can always listen to the original.

From road songs to dive bar anthems, Midland keep true to their style throughout the record. Two-steppin’, honky tonker Mr Lonely, complete with Dennis Quaid in the video, will get the crowds dancing and tells the story of dive bar debauchery and unfaithful lovers. The theme of cheating comes up in numerous songs on the album, Cheatin’ Songs and Cheatin’ by the Rules (where the accordion drenches this track in Texan vibes),make you wonder if someone in the band has been screwed over recently. Either way, Midland seem to be sticking to the conventional country themes. Every Song’s a Drinkin’ Song perhaps feels a little conceited, almost like they sad down and said “right, we need a drinking song now”, something doesn’t feel quite as natural about it. That said, it’s a great taste of Texas dancehall drinking music and I think there’s a real purpose to every song on this record. It’s like they’re aiming to bring back the classic subjects in country, there’s not a pickup truck, long neck bottled, girl in daisy dukes anywhere. That’s a breath of fresh air.

Musically, this album is peak modern country music. With guitar legend Dan Huff on production duties alongside ‘hit factories’ Shane McAnally and Josh Osborne, Midland has assembled a crack team that covers all bases. It’s clear that Big Machine have employed them to bring the solid musical talent to the project, whilst the band offer huge amounts of charisma and the label cover PR stunts (i.e. big pink limos), there is something cynical about the whole thing if you want to find it. Good music wins though, and this is really great music. Throughout the record, the slide guitar, pedal steel and all other instrumentation shines through. A song like I Love You, Goodbye has hints of Roy Orbison, it’s tinged with sadness and the rich production just accentuates this perfectly. It’s country heartbreak at its very finest.

The highest point on the album comes in the form of a song that fills a gap in the Midland set list. 21st Century Honky Tonk American Band is a big rocker, with a heavy riff and some next level slide and lead guitar playing. It’s one that’s sure to make a strong addition to the band’s live show and sees Midland add some heavier rock to their repertoire.

Jess Carson and Cam Duddy both get opportunities to step up to lead vocals on the record, with Roll Away and Lost in the Night respectively. Both are clearly great vocalists and make for a nice change of pace on a couple of songs. Mark Wystrach is Midland. His voice is synonymous with their sound, but it’s great to see the others have a chance to showcase what they can do. The vibe of Lost in the Night, especially the saxophone solo bring a great neon-soaked, seedy feel.

Comparing this album to On the Rocks is interesting. There are certain songs, like the nostalgic, sepia toned Fast Hearts and Slow Towns, that would fit perfectly on the first record. This album is different though. It’s a subtle shift of gears from the band and it works perfectly. There was no real need to change anything, On the Rocks was a much needed tonic to the Music Row dirge of late and I don’t think many people would have complained if the band had released On the Rocks 2. What they’ve done though is create a record that gently shifts things to the next level, there’s a little more rock and roll, the instrumentation is a little more rich and the songs a little more road-weary. It’s a stellar return from a band who just continue to grow. Sure, there are ongoing arguments about how ‘genuine’ the band are. If that troubles you, I recommend you close your eyes and listen to the music for a moment. After all, that’s the point.

One thought on “Midland – Let It Roll Album Review: Wystrach & Co. Return with a Stellar Set of Songs”