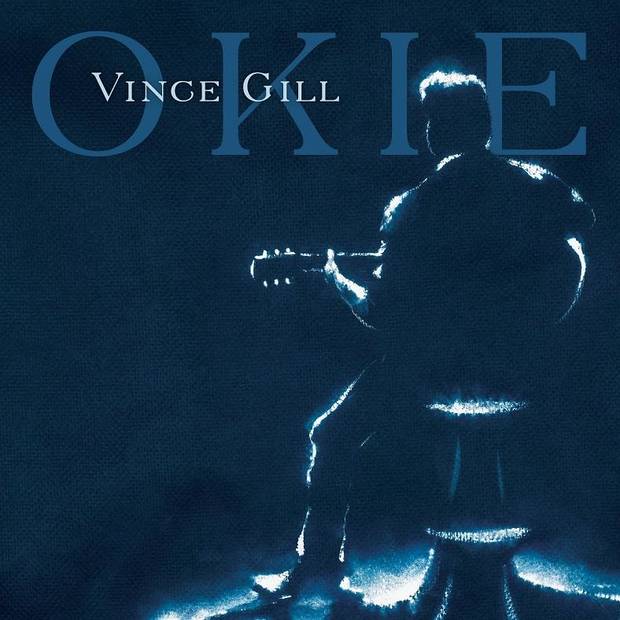 Vince Gill’s Okie arrives 3 years after his last solo album, Down To My Last Bad Habit, and a full 62 years into his life. Gill’s age is a key point, as so many of these songs could only have come from an older man with nothing left to prove to anyone but himself. Wisdom, experience, compassion, sorrow, love, regret and more are expressed here genuinely and with heart over melodies given simple arrangements to allow the words the room to be heard. As so much of the content is personal and intimate, it’s important that that room is given – otherwise, what would be the point?

The album opens with I Don’t Wanna Ride The Rails No More, one of the best songs I’ve heard all year. It has a pretty simple idea of an itinerant man who finds cause to stop his lifelong wanderings, and it tells his story simply, vividly, and without a whole load of unnecessary drama either lyrically or musically. Vince sings it superbly over a sympathetic arrangement that uses a gentle percussive “chug-a-chug” rhythm to put the listener on those same rails. It’s just a beautiful song, and it sets a high bar for the album.

When the piano appears in the intro to Forever Changed, followed by the brush strokes on the snare drum and the soft thudding of the upright bass, you’re put into a laid back, Sunday morning, coffee bar kind of mood. All very relaxed, and ready for Vince’s soft crooning vocal to appear. You might even think from the title of the song that it’s going to be one of Gill’s gospel pieces. But when that voice does eventually arrive, you find yourself blindsided by the lyric. “You put your hands where they don’t belong / And now her innocence is dead and gone”. Oh my. He’s put such a disturbing subject as child sexual abuse into a gentle melody with almost a lullaby quality. You’re wide open to hear what he’s saying as he relates without histrionics the impact on the abused – and also what maybe awaits the abuser. It is very effective, craftsman-like songwriting.

Gill also touches on societal issues on The Price Of Regret (racism) and What Choice Will You Make (teen pregnancy), while Black And White wonders if things were better in the past – “Some days yes, some days not quite” would seem to be the not unreasonable answer. The way he presents these songs, you feel he does actually care and they’re not just subjects that are good to write a song about. It’s the older man bringing his own perspective to topics that have touched him in some way.

Okie becomes most deeply personal when it reaches The Red Words, and runs through When My Amy Prays. Gill of course is married to the famed Christian artist Amy Grant, and in these 2 songs he puts their relationship and their faith into the same pot – to him they’re indivisible. The Red Words has a light and breezy feel to it, with a sound not unlike something Amy herself would have recorded back in the 1990’s.

When My Amy Prays is perhaps the centrepiece of the album. It’s a piano based song that provides what is probably Gill’s most effective and powerful vocal performance in this collection. His distinctive high tenor voice, rising as it does in the chorus, borders on the angelic and drives home the depth of feeling he has for Amy and the gratitude he has for the faith they have shared together. Vince has never been afraid to show his feelings in song, and he’s not about to start now. You’d have to be a hard person indeed not to be touched by both the song and the performance, although the overt religious expression might be a little off-putting for some. When this track was released ahead of the album it might have seemed just a little bit self indulgent, but it has exactly the right setting here in the album.

Across the album as a whole, the arrangements fall into the “understated” category. Despite (or maybe because of?) Gill’s renowned guitar skills there are no searing solos to be found here. The only point where it comes close to “rocking out” is That Old Man Of Mine, a murder ballad with a certain sultry, gritty feel to it. But even here, the story and the vocal are front and centre – the swirling rhythm and reverb guitars create the backdrop to a tale of an abusive husband and father as told by the son who couldn’t take any more.

Album closer A World Without Haggard pays tribute to fellow Oklahoman and obvious inspiration Merle Haggard, whom Gill names as “the best that’s ever been”. Appropriately, it’s soaked in Paul Franklin’s sorrowful steel guitar on what is perhaps the most old-time traditional country song on the album. It’s a great song, and performance, to round things off with.

There was a time when a new album from a Country Music Hall of Famer who’s sold over 26 million albums, with 21 Grammy awards and a boat load of CMA, ACM and other awards to boot, would have made waves. In fact, Okie was released on the same day as the much heralded Let It Roll from Midland and so went relatively under the radar. Gill would be the first to admit that his chart-topping heydays are likely behind him now, but this is an album by a man at peace with that – he’s a grandfather now, after all, and the advent of a new generation of stars to grab the headlines is the natural order of things. You wonder if the line “Let them cowboys be the heroes, I’ll just be an honest man” in the song An Honest Man has both a personal and a professional meaning.

Some who hear Okie will instantly consider it to be background music. The gentle tempos, rhythms and arrangements serve to emphasise how peaceful and relaxing Vince’s voice can be. Get yourself somewhere comfortable, play it while unwinding with a nice dram (or whatever your poison is) and you’ll find it hits the sweet spot. The irony is that it’s not a comfortable album at all. Its subject driven songs all cover difficult topics, while its most personal moments are so intimate and exposed. Too few established artists are confident enough to be so open.

Vince Gill didn’t set out to be a country music legend but he’s become one anyway, by playing his songs his way with heart, passion and feeling. With Okie, he simply continues his tradition. And I’ll say “Amen” to that.

I Don’t Wanna Ride The Rails No More, An Honest Man, When My Amy Prays