Ashley Campbell: in part 1 of an exclusive interview just ahead of her set at Country at the Castle in Kimbolton last Friday night, we talk new music, life on the road, and playing with other “second generation” artists. Alison Dewar reports.

March 2018 saw Campbell visit the UK for a C2C tribute to her father Glen and several gigs around the country, but since her TLR and Millport Country Music Festival appearances last September, her most recent trips have been to Ireland, where she played both north and south of the border.

With a new album almost under her belt however, she’s looking forward to getting back out on the road: “I recorded a new album in December and that’s pretty much finished, we’re just figuring out how we want to put it out and when.

“I’m really excited about it, I don’t know what it’s going to be called but I have some names in my head and as it gets closer to when we do release it, it’ll come to me. I don’t have to choose yet, so I won’t.”

She describes the album as “very nostalgic sounding”, explaining: “My writing is similar to before but I’ve taken a new direction as far as the sound of the music, there’s a more classic country Americana vibe. The stuff that takes a hold of my heart is classic country from the late 60s and 70s, so there’s a lot of steel guitar and fiddle on the new album, it’s very retro sounding.”

She is especially proud of a new duet with her Godfather, musical mentor, co-writer and banjo player extraordinaire Carl Jackson. “We wrote a new song and we recorded it live together in the same room on two separate mikes, it’s very stripped down – just me and Carl and our two banjos and I’m really excited about it.”

Fans at the Kimbolton gig will already have heard it (minus Carl as she says he hates to fly) but the rest of us will have to wait a little longer.

Campbell promises a new single release ahead of the album and says she very much hopes to come back soon, saying: “I always love coming here and I think the UK would really love the new music, so if the offers come in hopefully I’ll be able to come over here and promote it – maybe C2C next year if they’ll have me.”

All the songs on her last album The Lonely One, were written by her with a team of collaborators, among them Chris Roberts, who joined her in writing Nothing Day, and this time around he’s co-written many of the songs on the new venture.

Describing Roberts as an “incredible singer and songwriter”, her latest release is a bluegrass duet with him which features on his new album.

Most recently, she’s been writing with Nashville-based singer-songwriter Chris Gelbuda, who co-writes and produces for stars including Meghan Trainor and Billy Currington, and says she is “so fortunate” to be working with such a great writer. 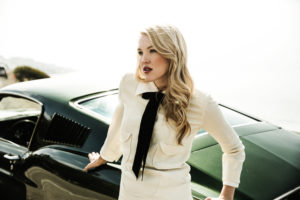 When it comes to capturing and crafting her own words, Campbell has recently decided to return to old-fashioned paper and pen, saying she’s invested in a small notebook that she plans to carry with her everywhere.

“It’s easy to lose things on a phone, or you just forget about them, now I feel like writing something down on paper, it helps me to be a little more creative – even the way you write the words, you can write them sideways or crossways, you can draw pictures next to them. I find that to be a little more inspiring…so I’m going to start carrying that notebook and writing down everything, even the dumb ideas.”

As a self-confessed foodie and fan of Asian food (she says she gravitates to the nearerst Chinatown wherever she stays), this time last year, when Campbell was busy preparing for The Long Road festival, she especially booked an Airbnb right next to her favourite Hong Kong-style restaurant in Birmingham.

Disappointment followed when a set change meant she arrived back too late for dinner – but she’ll soon be spoilt for choice when she visits Japan this October to support Ben and Noel Haggard, sons of the legendary Merle Haggard, at the International Country Music Festival in Kumamoto.

Her only previous visit to Japan was as an 18-year-old in 2007 and says she remembers being very culture shocked. Now, as a more seasoned traveler, she is excited to be going back.

“I’ve heard that the country music fans there really love the old school country, which is great, because that’s what I do. I’m very excited to be opening for Ben and Noel, I’ve played a couple of shows with them in the past and they’re really lovely guys.

“I’m bringing my guitar player and background vocalist and they’re kind enough to let me use their band, which means I get to have a full band too, which is really nice. Sometimes, if I can’t afford to bring a band I have to do a small acoustic set.”

So, when it comes to the sons and daughters of country legends, does Campbell feel part of an exclusive second generation ‘club’?

“Not really,” she says. “We end up running into each other, we’re doing the same things and, coming from similar places, we get put on the same bill sometimes.”

Recently, the magic of technology has allowed some of the greats like Roy Orbison and Buddy Holly to ‘return’ to the stage courtesy of a hologram tour, I asked if Campbell could ever imagine doing something similar.

“Maybe, you never know. My brothers and I have toyed with the idea of doing a Glen Campbell tour but that’s far off, if it’s going to happen. But Roy Orbison was a big inspiration for my album as well. I wrote a song one day that was inspired by Roy’s Black and White concert and that’s the song Vince Gill agreed to sing and play guitar on, so he’s going to be featured on my new album too – and I’m very excited about it.”