2019 saw the 25th anniversary of the Millport Country Music Festival. Brian Bennie was there, here’s his Day 1 report…

I’m almost embarrassed to say, given that it’s only a little over an hour commute from home, that this year on the twenty fifth anniversary of the Millport Country Music Festival, I attended for the very first time.

Long known as a Country and Western Festival that leaned more towards the Western than the Country , I had never before been inclined to attend. However this year, with the announcement of Country Superstar Cam as headliner, I decided it was time to head to the beautiful Isle of Cumbrae and see what the Millport Country Music Festival was all about.

Arriving on the Island late Friday afternoon, I was stuck by how much the entire town had bought into the Festival theme. On every lamp post flew the Star-Spangled Banner and most of the local pubs, cafes and shops had decorated their windows with Cowboy themed displays. It was absolutely bucketing down with rain, but as this was a music festival, in Scotland, it was pretty much expected and didn’t do much to dampen my mood for the weekend ahead.

I headed straight to the festival site that was laid out within the grounds of Garrison House, a beautiful 17th Century mansion, now a Community hub for the Millport Islanders. The Maverick acoustic tent was my first stop where I caught a great set by UK artist Jade Helliwell, ably assisted on backing vocals and guitar by the talented Luke Thomas. The highlight for me, a note perfect and spine-tingling cover of Leonard Cohen’s “Hallelujah”. 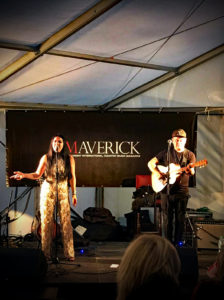 I made my way through the monsoon outside into Cactus Jack’s Marquee where I watched a electric performance by Morganway. This wasn’t the first time I had seen this band but it was certainly the best. “Devil’s Canyon” was my stand out track which truly allowed the six-piece band to showcase their talents. A great performance of Tom Petty’s “Free Fallin” turned into a massive sing-along and captured perfectly the energy and atmosphere in the tent. 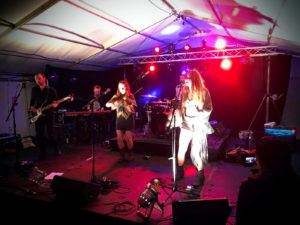 Sarah Jory brought the evening to a close in her own inimitable style. Having worked previously with such greats as Ricky Skaggs, Porter Wagoner and Van Morrison, the steel guitarist and vocalist promised a lot and boy did she deliver. Her band (again including Luke Thomas who must have been one of the busiest artists at the festival) were note perfect and from first note to closing the night, with a stunning instrumental rendition of “Amazing Grace” that caused more than a few tears throughout the audience, Sarah proved the perfect headliner to bring the night to a close. All in all, a very enjoyable start to the weekend.

One thought on “Millport Country Music Festival – The Highlights From Day 1!”