In Part 2 of our exclusive interview with Ashley Campbell, just ahead of her set at Country at the Castle in Kimbolton last Friday night, we talk more about life on the road, touring with her father, and plans for the Glen Campbell Museum. Alison Dewar reports.

With spending so much on the road, Campbell reveals she stays sane by watching Netflix on her phone and reading books, plus she’s also a big fan of sightseeing.

Irish fans will be pleased to hear that one of her recent highlights was staying in an Airbnb in a small town near Omagh, where she was playing at The Blind Cobbler as part of her June tour.

“The Ireland tour was just me and my fiddle player, doing the duo scenario, and we stayed in someone’s house, so it was really cool. We got to make friends and the family told us about an awesome forest trail, so we took the car – I learned how to drive stick shift and I’m really good at it now – and we went to the forest for a really long, beautiful walk.

“I love all the parts of the UK, I love being in the city – there’s something to love about everywhere.”

Last month (August), plans were announced for the launch early next year, of The Glen Campbell Museum and Rhinestone Stage, situated in the heart of Nashville at the corner of Broadway and 2nd Avenue.

According to the press release, guests “will experience a multitude of immersive, interactive displays showcasing different aspects of Glens’ life and extraordinary career” with the museum featuring artifacts and memorabilia, intimate family photos, his legendary guitar collection and stage clothes.

For Campbell, it’s a relief to be able to talk about the plans…the rest of us can take a virtual tour here https://www.glencampbellmuseum.com/press

“It’s been hush-hush for so long, now I’m like ‘oh, do people know about it’, it’s going to be right there above the Rock Bottom bar on Lower Broadway and I think it’s gonna be really cool.

“It’s also going to be a live music venue, which is the part I’m really excited about. We’ll be showcasing up-and-coming artists, I’m going to be very involved in that, and curating events because I want to bring quality music to Broadway that’s not just country cover bands.

“I want it to be like a musical refuge with Bluebird Café style shows, like a songwriters’ round because they don’t do that on Broadway, and maybe even a bluegrass night once a month.

“The great thing is that the display cases are moveable, so they will be set up like a museum in the daytime and then they can be pushed off to the side for the shows at night, it’ll be a very versatile space.”

No Ashley Campbell interview could be complete without asking about time spent touring with her father. The fact she didn’t intend to be a musician, preferring instead to study theatre in California and only learning the banjo for a play, has been well documented in previous interviews.

She joined his band after graduation in 2009, when Glen asked her to play banjo on tour to Australia and New Zealand, and spent the next few years alongside him throughout his series of farewell concerts, including one at London’s Royal Festival Hall, the same venue where he played with The Royal Philharmonic Orchestra way back in 1977.

She has very fond memories. “I got to tour with him and that was awesome, I was really fortunate and blessed that I got to do that. You know, I definitely feel sad sometimes that I can’t make new music with him, especially now that I’m doing it, that would have been great.”

Instead she is forging her own way but given her theatre studies, I wonder if she yearns to tread a different kind of stage, maybe the musical theatre kind?

“That’s definitely something I’ve always dreamed about doing, but it’s probably not going to happen any time soon – I’d absolutely love to though.”

Already an accomplished piano, guitar, banjo and mandolin player, Campbell admits to a ‘short-lived’ experience trying to learn the violin after joining a string quarter in her 6th grade.

These days, she says she prefers to focus on those instruments she’s good at rather than take on new challenges: “I’d rather be better at one of them, than be kind of good at all of them.”

As we wrap up the interview to allow Campbell to head off for her soundcheck, I ask for any nuggets of wisdom her father has left her with.

“He always encouraged me to be very genuine in my personal life as well as my professional life. There were two things he said, one was to ‘make music that you like, because that’s the most important thing. If you like it, then it’s genuine to you and the chances are other people are gonna like it too’. The other was ‘to be a super person and the superstar will follow’.”

Check out https://www.ashleycampbellmusic.com/ to keep up with her news.

Missed part one of this interview? You can read it here. 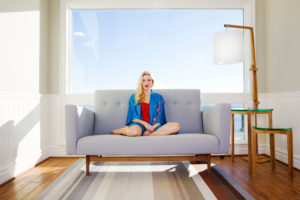