By lunchtime on Saturday the torrential rain had faded to frequent heavy showers so my waterproofs were donned and I wandered back to the Garrison. The site was noticeably busier with Country apparel stalls, inflatable children’s play area and a lethargic looking bucking bronco. A lot of the crowd had dressed for the occasion with some fantastic Period Western Costumes on display alongside throngs of cowboy hats in every imaginable style and colour.

It was clear from the start that the crowd were there to enjoy themselves no matter the weather and the atmosphere was buzzing with the fun and friendly chatter. I had a quick catch up with two of the festival organisers, Gavin and Scott, and their sheer enthusiasm and drive was infectious and great to see. Throughout the day both were a constant presence on the ground, taking the time to chat and making sure everyone was having a great time. A real personal touch that I know was appreciated by many. 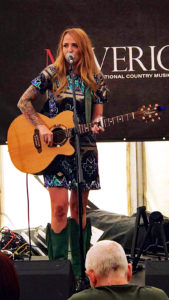 My first set of the day was Kezia Gill. We had chatted earlier (look out for the interview coming soon) and it was great to see someone so humble and passionate about her music bring it to a very appreciative crowd. 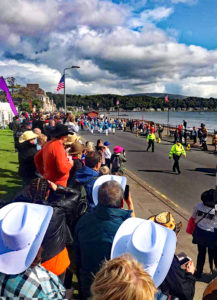 I then made my way out to the main street to watch the Millport Grand Parade, an experience I was promised was not replicated at any other Country Festival. That promise was absolutely true! The street was lined several deep as a large colourful procession paraded past the festival grounds with everything from a marching samba band to a line of rare American muscle cars, motorcycle groups and even Western themed mobility scooters taking part. It was quirky, fun, and tipped a real nod to the community spirit which has obviously embraced and helped to grow the festival into what it is today. A brilliant addition to the atmosphere and a real highlight of my entire weekend. The smiles of the participants and the crowd alike spoke volumes. 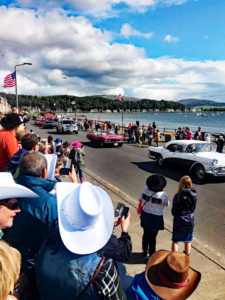 Back into the grounds and up to the Nashfield concert stage where, although grassy and out in the open, the ground had held up brilliantly with next to no mud.

I had been looking forward to Stevie O’Connor since the line-up announcement and he didn’t disappoint, with probably my favourite set of the whole weekend. I had seen Stevie before but only in small, intimate settings and I was intrigued to see if he could carry his honest and engaging style on the big stage. I shouldn’t have worried. This was a full band, main stage worthy performance in every sense. Stevie and his band gave everything they had as they barrelled through a barn-stormin’, honky-tonkin’ set that left me wondering why this guy isn’t a mega star … yet! From the full-on high tempo “Banjo Burns With Flames” to one of the most beautiful, honest and passionately delivered songs in “Willow”, this was a set not to be missed and long to be remembered. 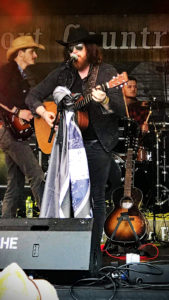 Next came the Bluesy Soulful voice of Elles Bailey. Elles had told me earlier (again, look out for the interview coming soon) that she didn’t believe in boxing herself in to specific genres and I could see from her performance exactly what she meant. Her style is certainly Country influenced but there are also strong Southern, Roots, Jazz and Motown styles (among others) flowing through her music which again was very well received by an appreciative crowd.

I spent the next while wandering between the venues catching snippets from Izzie Walsh, Elaine Lennon and Lockeland among others which left me cursing the inevitable clashes that a festival so chock full of talent brings. The festival bookers had done an absolutely fantastic job and there really was something to suit every taste. Just a shame I couldn’t be in two or three places at once. 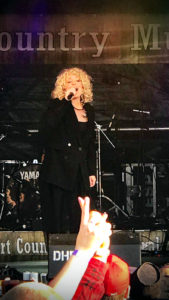 Cometh the hour, cometh the woman and it was very noticeable that almost everyone started to head towards the Nashfield stage in anticipation for the night’s headliner. The atmosphere was electric and when Cam appeared and opened with “Diane” the crowd responded in full voice, singing every word enthusiastically to the obvious delight of the lady on stage. The rest of the set whizzed past with little time taken to catch breath, a notable exception being an extremely emotional performance of “Village” that left Cam visibly in tears. A fantastic, fitting headliner to bring the night to a close.

Millport may have been a festival I’d never quite made it to before, but this weekend was right up there as one of the most fun, well organised and talent packed festivals I’ve attended. The Island is beautiful, the islanders welcoming and the festival’s blend of traditional and modern was spot on.

Thanks for the memories Millport, let’s do it all again next year ☺