Take a country gospel singer performing his UK debut in one of London’s most iconic and spiritual music venues and you have the perfect recipe for a marriage made in heaven.

Josh Turner brought body and soul to Union Chapel last night (Sep 5) and, as he and his three-strong band stood bathed in shafts of light, there was certainly something special in the air. 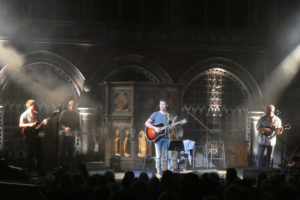 It’s a well-reported fact that American artists love to come here because we listen to the songs, but the sold-out crowd hadn’t read the rule book. Right from the start, as he launched into Why Don’t We Just Dance and then Deep South, the audience was with him every step of the way.

Union Chapel’s pitch perfect acoustics showcased Turner’s rich bass-baritone voice, as the South Carolina native fondly recalled one of his first ever gigs being back home in the Union Baptist Church – a fitting coincidence of same name, different place.

For a first-time performer here, this artist really “got” the crowd, interacting with plenty of banter and humour and giving as good as he got, especially with the lady in the balcony who promised she wouldn’t play “hard to get”.

Not shy of sharing the love and his picks with the lucky folk in the front rows, he joked about the challenges of the English language, declaring he had never worn a pair of trousers – for which read pants in American-speak. 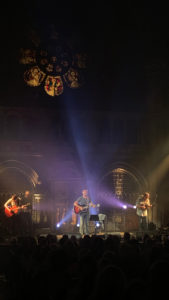 From up-tempo songs like Swing Low Sweet Chariot and Firecracker to the powerful Me and God – could it ever have been sung in a more poignant place – Turner played the evening perfectly.

The latter was written by Turner and recorded as a duet with bluegrass legend Dr Ralph Stanley, one of his all-time heroes; while I Saw the Light, written by Hank Williams, was a real crowd-pleaser.

Too many other spinetingling hits to mention here – personal favourite Hometown Girl – but roll on Saturday night in Manchester and Sunday night at The Long Road. You’re in for a real treat!