Austin Jenckes was one of the standout artists at The Long Road. His Sunday night session on The Front Porch might have clashed with Cam but that didn’t stop plenty of people hunkering down on the grass to hear his amazing voice as the sun went down at Stanford Hall. Just beforehand, Six Shooter’s ALISON DEWAR spoke to him about his own musical influences and asked the big C2C question.

Austin, thank you for taking time today, when did you arrive in the UK?

I got here on Wednesday, played Bush Hall on Friday with the Steel Woods, and then went up to Glasgow. I got to rent a car and drove down yesterday, that was pretty cool.

When I interviewed Ashley Campbell recently, she said mastering the stick shift was quite a challenge.

I got an automatic, I paid extra (laughter). The first time I came over here was with my wife for my honeymoon and we rented a car with a stick shift, it was fine ‘cos I grew up driving a stick, but this time I decided to just make it easier on myself.

Did you take in a few of the sights on the way down?

I just listen to music and try and stay on the right side of the road – the left side I mean (jokes).

Who do you listen to in the car?

Well I was listening to you!!

No, I listen to a lot of John Moreland, he’s one of my favourite artists, he’s from Oklahoma and a very, very talented songwriter. Then I listen to a lot of random stuff, I was listening to Mitchell Tenpenny, then Bon Iver and Foy Vance, which is more folk. I have a handful of records that I listen to over again. I’m not a random guy.

Taking a step backwards, tell me about the first albums you grew up buying and listening to.

What’s crazy is that I grew up playing music in church, so I listened to a lot of Christian bands and from then there it was like active rock, Staind was really big – Aaron Lewis’s original band. 3 Doors Down, that kinda stuff – that was probably middle school. The Offspring was a huge one for me too, a little more heavy stuff.

At high school John Mayer and Jack Johnson came out – all the girls liked them, so I was like ‘I play guitar’…. After that a bit more folk, Needtobreathe was a huge influence, but somewhere in there was always my dad’s music and southern rock, Lynyrd Skynyrd, The Eagles, Tom Petty.

On your album, If You Grew Up Like I Did, you wrote about your dad. You have a daughter of your own now, has that changed the way you write?

It definitely has. I feel like personally, going into trying to become a parent, I have thought a lot about how being a musician is so focused on yourself. I luckily have a very strong-willed wife who doesn’t let me get away with anything – in the best way she keeps me grounded. 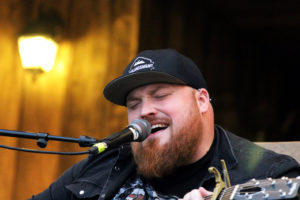 This life is a very solitary thing, you’re going out there, seeing lots of people and lots of places, but everything you do comes from you, no-one else can write your songs the way you do.

Yeah, when it’s always about you it’s a great feeling (laughs). I don’t want to sound like I’m complaining because it’s an amazing thing to be able to do and I’m very thankful, but having my daughter really opened my eyes to see something that is so much more powerful in that way.

I could be sitting down with my guitar to write a song and I’m really focused on it and she can walk up and say ‘no Dadda, let’s play ball’ and immediately there’s something more important. I think it’s helped me a lot, it’s helped me write a little bit more, just less focused on myself.

Do you gravitate towards lighter types of music now, maybe happier stuff. Some of the music on the album, songs like Fat Kid…some of those messages were quite deep.

Yeah, I’m an overthinker, I am always in my head thinking about the world, but it’s a healing thing for me and I have to have that in order to be happy. I’m a pretty happy-go-lucky guy, I don’t spend a whole lot of time worrying about the weight of the world, but I do think a lot about my actions and sometimes to a fault.

Sometimes it’ll prevent me from moving forward, so a lot of times it’s just me working my way out through those problems. The fat kid thing, being overweight was always something I struggled with; from being the last one picked on a team or whatever; it’s those kind of feelings. I think in general I write more songs that are light-hearted, it’s just I happen to gravitate towards the ones that have deeper meaning because they make me feel the best.

My biggest worry is that if I do too much of that, people will say ‘ok we can’t take it any more’….they’ll be like ‘yeah, we get it’ (laughs) and I am very sensitive to that too. I’m definitely not a party guy and not necessarily like the ‘hey girl’ guy – a lot of my buddies in Nashville are those guys and there’s nothing wrong with it. We both look at each other and we’re like…I wish I could be more like you…

That’s one of the coolest things about this album, I’ve had so many artists and peers in Nashville who, in my opinion are way bigger than I am, just really respond to it.

It was a really special album… you debuted at the Grand Ole Opry in June, tell me about that, how amazing was it that Vince Gill introduced you.

It was insane, I was freaking out. I didn’t know about Vince Gill until that day, so I showed up and got to shake his hand and then he gave me one of his songs. I was only supposed to play two songs and he came out after the second one and said ‘play the other one’. I said ‘what other one’ and he was like ‘Fat Kid’, so I did. That was really cool and since then I’ve played the Opry twice, I’m playing it again in September and now I’ve just found out I’m playing the Ryman in October and I’m very, very excited about that.

You’ve supported other artists like Brothers Osborne, Ashley McBryde. Who would be your next dream companion on stage?

That’s a really hard one. Not to be clichéd because I’m sure everyone would say this, but I would love to play a show with Chris Stapleton. I’m such a mega fan.

We would definitely have front row seats!

He’s so good, he’s amazing. You can’t really even compare him to anybody.

And what are you up to now with your music?

We recorded eight songs at Abbey Road in May, I don’t know what we’re going to do with them, we don’t have any release date yet, but we’re getting them mixed and at least put one of those songs out. Then I’ve got four or five other songs that I’m going to get into the studio for at the end of the year, new music, obviously.

All ones that you’ve written.

Yeah, mostly, there might be one that’s not, but almost all of them.

Back in May, you played Pizza Express Live with Lisa Wright.

Yeah, Lisa is awesome. I only did my album release two nights before that in my hometown, so I flew in and got to meet Lisa and play, I met Baylen and all different kinds of people. That venue is really cool, it reminds me of a place in Seattle called the Triple Door, which is where I had my going away party when I moved to Nasvhille eight years ago. When I played there I had these familiar feelings, it just took me back…

We’ve not seen you at C2C yet?

Nope, I hope to do it in March, that’s my goal.

That’s great news, you’ve done a few gigs here this year, could we expect more of a full tour?

Yeah, I think probably maybe bring a band too if we can, that would be awesome.

And finally, I read that you do all your social media, how on earth do you keep on top of it all?

Yeah, well I have some people that help, but what they do is they prompt me and they say, today you need to do this. That way all I need to do is actually doing it, rather than think about what to do, which is the hardest part. You can spend so much time thinking ‘this is dumb’, ‘this picture is not cool’, or whatever. They just say get a picture of you playing today. When I came over here, they said make sure to get a handful of stuff. I respond to all the comments and messages.

That’s pretty impressive. Austin, thank you for your time – we’re so looking forward to seeing you tonight and fingers crossed for C2C. 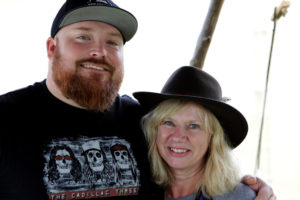