Thompson Square Interview: Our man Brian catches up with the double act as they land in Glasgow on their inaugural UK tour.

S – We can’t believe it either. (laughing) 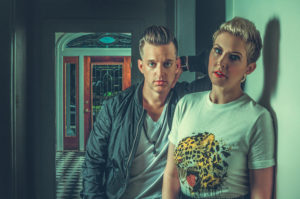 S- Just know that we’ve always wanted to be here.

K – We’ve been trying. It hasn’t been for not trying. Probably 10 years we’ve been trying to come and for one reason or another it just hasn’t worked out, so we’re so happy to be here now.

This is your first ever overseas tour, how are you finding it?

K – It’s amazing, it’s been a life changing experience for us, for real. I never thought we would do this you know? The things that we’ve seen and the fans that we’ve met and engaged with, are unlike any others. A different style of fan I guess. It’s very different and it’s a beautiful thing to see.

When you decided to do it, you were really going to do it ……

S – Oh yea, we wanted to get as much in as possible in a short period of time.

K – Yea, the idea was, let’s get over here and see how it is, see how we are received and how everybody kinda jives with each other, and then start coming over a couple of times a year. That was the plan and that’s definitely gonna be the plan now.

S – The first couple of days were a little rough …

K – We slept on the plane over so it was just kinda like a bad night sleep, it wasn’t too bad.

Why has it taken you so long to make this step and bring your music out with the US?

K – Without getting dark, our record label kind of shut the door on us so we couldn’t release new music, they weren’t working any new music…

S – We were begging to come here.

K – That was not a possibility and finally we asked out of the deal. That’s why.

When you don’t have the support of the people who are supposed to be helping you get your career further down the road, it’s difficult.

So we asked out of that deal, and during the time that we were in between record deals, we created Masterpiece. We wrote the songs and produced that record ourselves with Dann Huff and Nathan Chapman. We put that whole album together, and that led us to another record deal, and they were just like “let’s do it all, we love all your ideas”

S – And first on our list was, we wanna go to Europe, we gotta make it happen.

Were you surprised there was such a big Country Music scene over here?

K – We always thought that we had fans here …..

K – Surprised at the amount of people who have shown up at our shows.

K – We’ve never been distributed over here, ever, so the fact that a thousand people, at noon, show up at a tent at the Long Road Festival, it’s crazy man. I was expecting 10 people.

You Played the Long Road Festival at the weekend, how was that?

K – That was one of the greatest acoustic performances that we’ve ever had. We were in awe, honestly, at the depth of knowledge of the fans with our music. They knew songs off the Masterpiece record which has just come out and not just Masterpiece but the other ones too, it’s crazy.

S – You guys saw me getting all emotional, I’ve been getting emotional a lot. It was special, it really was, just to look out there and see everybody, like full attention, no phones, you could hear a pin drop, it was a pleasant surprise.

Was it different from festivals you play over in the US?

K – Completely different. Festivals in the US seem to be a little more … emm … I’m gonna use Rock n Roll just for the lack of a better word. Its 40,000 people and its giant PA and giant stages and its full volume and it’s just bam bam bam. There’s no intimate part of it, it’s just full on.

K – But it’s also a LOT of fun to play to 40,000 people. They are equally fun, I don’t find one of them better than the other or more enjoyable than the other, it’s just completely different and that’s what makes it so special here. I hope you guys never try to adapt to what we do over there as far as festivals go, because what you do here as a festival is very unique. It’s very clean…

K – and it’s really really cool. I hope you always keep your own thing because it’s really special for us to witness a different type of festival.

Tell me about your new record Masterpiece…

K – Wow, this is our most proud moment I think. Making it was self-serving, it was also liberating. We were just thinking about our fans and what we thought they would want to hear from us. We didn’t have any suits in the room telling us what to do or who to use to produce, so we got to use one of my heroes Dann Huff to produce a couple of sides and Nathan Chapman produced a few sides.

We actually produced the song Masterpiece ourselves. The song itself was written after the album was finished. It was a song that I wrote. It was early one morning and at 0530 I woke up with that title in my head and I couldn’t get back to sleep for thinking about it. I went outside and started thinking about what a Masterpiece meant to me, like what’s the one thing I’ve done that’s better than anything else I’ll ever do, and it was becoming a Father, you know? This little boy that was asleep a few feet away. So I just started putting him in the same wheelhouse as Picasso and the Eiffel Tower, all that stuff, because he is our Masterpiece and I think that Parents definitely view their kids as that.

So that’s taken on a whole realm of its own with our fans. Its Shawna’s favourite song that I’ve ever written and it’s certainly become one of my favourites. 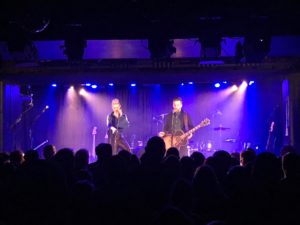 K – I’ve done more things than I ever thought I’d ever do, including marring Shawna.

The awards and the Grammy stuff, I mean it’s crazy. The life that we’ve led is crazy. The weird part about it though is it moved so fast. In the beginning we couldn’t really enjoy anything. So we’ve actually had to go back and I had to remind myself of what we’ve done. To think, oh wait, you actually are pretty good at what you do.

To me, it doesn’t matter what you did because you did it. Now, what are you going to do. So every time I’m at the did point, I’m always wondering about the do. It’s a never-ending cycle and it’s a huge character flaw.

Every time we’ve won an award, they’ve always found me in the corner of the bar by myself in this very dark depressed kinda way.  ‘Cause it’s like, you just won the gold medal, now what are you gonna do? So you gotta reinvent it all the time. I love that struggle and I love that challenge. I just wish I could enjoy the successes more you know? But I’m still very thankful for everything that’s happened to us.

Keeping on the book theme, what’s the next chapter for Thompson Square?

K – I have something that I’m super proud of and that’s Shawna’s solo project. She always wanted to do a traditional Country album and we just finished it. We’re in the process of tidying up a few things. It’s just her. I’m not singing, I’m not playing or dancing, I’m not doing anything with it.

K – OK, I’m producing (laughing) It’s been amazing just to be the Husband, and let her do her thing and let her make me look really good as a producer (laughing) I can’t wait, this is gonna blow your mind.

S – It should be out in Spring, I’m so excited. 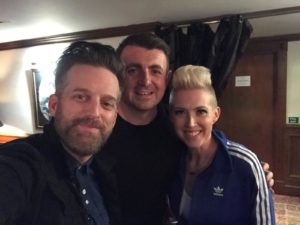