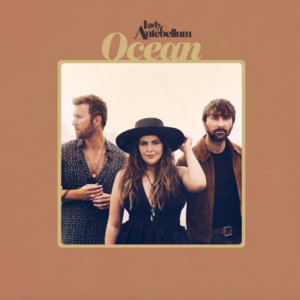 After a wave of change, Dave Haywood, Charles Kelley and Hillary Scott have watched the tides rise and fall and are embracing the power of vulnerability with the release of Lady A’s forthcoming album OCEAN, set for release November 15 on BMLG Records. It marks a new beginning that brings the Multi-PLATINUM trio back to their roots, showcasing their familiar vocal interplay and individual instruments on the emotionally resonant 13-track project. Lady A chronicles personal relationships and everyday responsibilities with a balance of growth and maturity that could only come from 13 years of working together. The CMA-nominated trio’s upcoming release is available now for pre-order at all digital retailers – https://LadyAntebellum.lnk.to/Ocean.

Fans will also immediately receive a download of the title-track along with previously released songs “Pictures” and their Top 15-and -climbing single “What If I Never Get Over You.”

“There’s this theme of returning to the core of who we are—as writers, vocalists and people—that came out in each of these songs,” Dave Haywood explains. “Our time in the studio with Dann had an excitement that felt like we were making our first album all over again.”

Produced by first-time collaborator Dann Huff, OCEAN is full of depth and despair, with its title-track Scott’s bare vocal puts a bow on the album’s core reminding us of life’s beauty even when we get caught in its undertow. With moments like “Be Patient with My Love,” which Kelley co-wrote as a beautiful ode to commitment, they balance raw feelings with squealing guitars.

“It’s such a cinematic and theatrical melody that really tied together our standpoint of this record as a whole,” adds Scott. “OCEAN stands for all of the things that we think and feel when we hear the word. Its parallel with those feelings much like the songs about barely keeping your head above water and others that make you feel like everything is smooth sailing.”

Fans can now watch a stunning performance of the album’s title-track for OCEAN here: https://LadyAntebellum.lnk.to/OceanVideo

The album allows Lady A to let loose too. “You Can Do You” is a swaying live-and-let-live anthem inspired by the hustle of Nashville’s crowded streets, while “Boots” combines heartland-rock crunch with Celtic fiddles. On the swirling “The Thing That Wrecks You,” the trio gets an assist from fellow Country music superstars Little Big Town, who supply background vocals; its dreamy coda features the two groups’ vocals intermingling, weaving in and out of one another and occasionally hovering over the gauzy guitars.

Over the course of their decade-plus career, Lady Antebellum has become one of the 21st century’s premier vocal groups, blending deeply felt emotions with classic country sounds. As a Country-radio staple, the trio has amassed record-breaking success with nine No. 1 hits while ushering in more than 18 million album units and 34 million tracks sold, with over 4 billion digital streams. Known for their RIAA 9X PLATINUM hit “Need You Now” which is the highest certified song by a Country group, they have earned ACM and CMA “Vocal Group of the Year” trophies three years in a row and countless other honors including seven GRAMMY awards, Billboard Music Awards, People’s Choice Awards, Teen Choice Awards and a Tony Award nod. For more information on new music and tickets, visit ladyantebellum.com.