Eric Paslay Interview: Brian chats to the Texan about his new album ‘Live in Glasgow’ and more

It’s no secret that Eric Paslay has built a strong, Celtic bond with fans up in Glasgow, so we weren’t surprised when he announced the release of his new live album ‘Live in Glasgow’. Our man Brian attended the launch party, hosted by our good friends at the Scottish Country Mafia, and had chance to sit down with Eric at his subsequent show to discuss all things music, Scotland and new babies.

Eric, welcome back to Glasgow. I feel like I’m saying that quite often ….

Thank you, We’re back again!

We love having you here and we were delighted you chose to record your live album here.

Y’all chose me I think 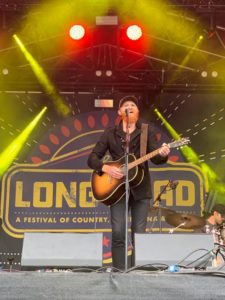 You seem to have a real connection with Scotland …

Other than my beard (something of a running joke with Eric’s Scottish fans), the first time I really came to Europe was Scotland. It was one of the first stops we had and I was just mind blown. I just couldn’t believe how much y’all knew our songs. It was a writer’s round with Randy Houser, Angaleena Presley, Michael Tyler and myself and the whole crowd were singing every song off of our album. If it existed the crowd sand it. The stomping and clapping, it was amazing. I’ve told this story many times but I just remember thinking if I ever record a live album it needs to be here in Scotland, and we did it, it happened. It was amazing.

The “Live in Glasgow” album launch, hosted by the Scottish Country Mafia, was last night, how was that?

It was fun. It was really cool just celebrating with everybody. I played my first ever Scottish guitar pool and writers round with really talented people. In Nashville there’s a certain style of song that you hear and certain lyrics and last night it was cool to play a round where there were little different phrases and the melodies were slightly different. You can totally see how Country music is rooted in Scottish music and Irish music. The way in which the melodies occur is very similar to what we do in Country music.

The proceeds from your album launch went to the “Help Musicians Scotland” charity, how does it feel to be in a position where you can help empower other musicians that are just coming on to the scene?

It’s amazing, I’m always mind blown that some famous people don’t do more good. There’s a lot of people who have the spotlight on them that are only about themselves, but it just feels good to help other people, regardless of what you do.  It’s also great to spread the word about “Help Musicians”. There are a lot of musicians that need help, if they’ve gotten sick or struggling with any type of abuse, alcohol abuse, drug abuse. “Help Musicians” help in so many different ways, assisting family members as well as the musicians themselves. It really is a cool organisation and I think that the word is getting out.

Thousands of miles from your home, your talent is helping people on the other side of the world, that must be crazy?

The world’s not that big (laughing) When you get out of the bubble you grew up in, you realise that it’s pretty small. I’m very grateful I can get on planes and tour around the World. I’ll officially go from Nashville all the way around the world on this tour. I’ll make a trip around the whole world in a little over a month

I love playing music and it just feels good to help others while doing it. The people I look up to have always helped others, from Rich Mullins to U2. You have a platform so why not use it for good. It probably doesn’t help me with selling more records, you know what I mean? If I was all in it just for me, I probably could have made some other decisions that would have hurt others and helped me …. But we’re doing alright (laughing)

As well as helping musicians, you also work as an advocate for type 1 diabetes?

Yea, its great. I’ve been a type 1 diabetic since I was 10 years old. There are so many great tools now to use, from insulin pumps to continuous glucose monitors. I wear a Dexcom which literally tells my phone right now what I’m at, (checks phone) I’m coasting at 86 which means I probably should eat soon. It’s a device, a little platinum wrapped wire that slightly goes under my skin, tiny as can be, and it sends my blood sugar level to my phone, instead of pricking my finger. It shares to my wife and it shares to my band so when I’m on stage they can say “Drink more OJ” if I need it.

I did a podcast this year called “Level with me” where I got to talk to other type 1 diabetics, their spouses and the parents of kids with diabetes. There are so many stories. As a type 1 diabetic its cool to hear every one’s story and that although everybody struggles with it, there are amazing tools we can use to make things easier. If this was 100 years ago, we would all be dead, so I’m grateful to be born now. I wish I wasn’t sick but I’m grateful to be sick with something I can live with.

Going back to the music, you’re nearing the end of the European leg of your tour, how have things been going so far?

Everything has gone well. I’ve sorta been feeling bad, but hopefully I’ll heal up and not get a full on cold. Pete, our front of house sound guy, has been driving the Sprinter everywhere. He’s fabulous. I’m gonna miss him. We’ve gotta come and tour in the UK a lot more to have him around.

Do you all become like a family when you tour, everyone depending on each other to make the show happen?

Absolutely. With guys like you too as well as the crew. You and I have hung out a few days over the last week and now it’s like “Hey, what’s up Brian” when we meet. When people are around, they’re part of the hang and part of the family and its always sad to say goodbye. We’ll be back though.

We’ve got a few official shows left with the band. It’s crazy that its already coming to an end with the European side of the tour. Then we’ll have a vacation here in the UK for about 7 days and then I fly to Australia and do it all again.

Its amazing. It really is. She’s 9 months old so I don’t know if she’ll really remember it, but we have some beautiful pictures. And we just filmed a music video for a song I wrote for Piper. Natalie and I are singing on it together. It’ll be really cool to look back on it like “hey, we filmed that in Scotland”.

When will that be released?

That’ll be early next year, so you gotta wait a little while. 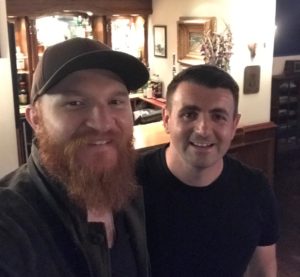 You played the Long Road Festival at the weekend; how did that go?

It was amazing. It was fabulous. I couldn’t believe we were even playing there, in the grounds of that old amazing English Manor house, made out of stone, with a moat river around the whole property, with the Queens swans floating on it. The fact I know they’re the Queens swans shows I’ve been here before. (laughing)

I told someone that I was heartbroken as I own swans back home so I could never move to England. They were like “Oh I’m so sorry” and I was like “I’m kidding, let the Queen have them, I’ll feed them” (laughing)

You seemed to really enjoy the energy of the crowd.

The crowd was huge, only the second year and that’s a lot of people showing up. Incredible.

It was a 45-minute set so we had to cram it full of hits and have a good time. I feel like we were just getting warmed up.

How does Long Road compare to some of the US festivals you play?

When you’re not touring the world or working on your music, what do you do to relax? How do you kick back?

My wife and I renovate places. Some people think that’s stressful. I kinda have fun doing it, building things and working with my hands.

I like fishing occasionally in our pond for bass and perch. We’ve got a little farm North of Nashville and we go up there and hang out. If we’re not renovating somewhere, we’re just walking around having fun.

As a Texas native living in Nashville, what do you miss from your Home State?

When I go back to Texas, you can feel what Texas is. There is this cool vibe about Texas. There’s a lot more tucked in collar shirts and cool belt buckles.

I miss the dance halls. There aren’t really any dance halls like the ones in Texas. There like your pubs in a way, Grandparents down to Grandkids, all hanging out and dancing with a live band.

I miss the Kolaches we have in central Texas. Poppy seed Kolaches, they are amazing. They’re like the best roll you ever had with this poppy seed sweet filling. It’s not great for diabetes. I take more insulin (laughing) make sure my levels are good.

I miss family, I miss the memories of the town I grew up in. My parents don’t live there anymore, but I have extended family there. We play there in October so it will be nice to see them and they’ll get to meet Piper for the first time.

Talking about Piper, do you think fatherhood has changed you?

Absolutely, I always hoped I’d be a father. I know it’s not on the cards for everybody but I’m grateful that Natalie and I have got to have a little girl.

I think my time management and what I do with my time and how I make decisions has changed. Usually I’d say yes, yes, yes to every invitation, but now I ask what is it for and is it actually worth going. Not out of selfishness, but out of spending time wisely.

Has Piper helped inspire you in your song writing?

Absolutely. The thought of having a child has always inspired me. Children are pure and haven’t been corrupted. They still know how to dream. They still see a kid that doesn’t look like them or sound like them, and run to them and say friend. That is so inspiring.

What’s coming up in the future?

More touring! Then the release of “Live in Glasgow” on September 20th that I’m excited to share with the world. After that its really getting prepared for the studio album that will be released early next year. I’m also working on a lot of things that I can’t wait to share with everybody. 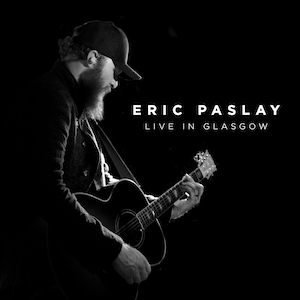 Buy it from iTunes here