Joe Nichols Live Review: The Hits And More As Joe Opens Up His Songbook For Requests

A hot, sweaty night in a bar. A packed, excited crowd. Good beer and whiskey flowing. Two guys on a stage playing country music. It could’ve been Nashville, or Austin, or any of a number of other US towns and cities. But no, this was Manchester, UK. And the reason for this scene? Well, that would be Joe Nichols.

For the first time in his long and storied career, Nichols had arrived in the UK to play a few shows for the natives. 17 years is a long time to go without, and this crowd was thirsty. Anticipation heightens the senses, so the saying goes. And so we were all set for a memorable evening.

As Joe and his long-time accompanist and friend Brian Spradlin perched atop their bar stools on the stage, they could have been in no doubt that the audience was theirs. The venue has a stated capacity of 220, but the volume of the welcoming roar could have come from ten times that number. Whatever the count, the place was heaving and getting hotter by the minute.

By the time they’d gone through What’s A Guy Gotta Do and The Shape I’m In, Joe’s hair was dripping with sweat. He was sat down,remember , but that’s how hot it was in the room. His t-shirt was quickly becoming soaked – queue some enthusiastic cries of “Take it off!” from the ladies. He demurred, of course, despite further encouragement as the evening went on.

As Joe intimated when I interviewed him before the show, he wanted these evenings on the tour to be relaxed and involving for the audience. He invited requests – how often does that happen? It’s a pretty vulnerable place for an artist to be, who knows what might be asked for over the span of a career? 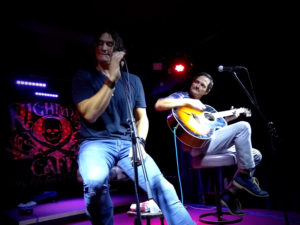 I’m sure some songs could have been anticipated – I mean, he’s always likely to play Brokenheartsville or Sunny and 75, right? Sure enough he delivered these and The Impossible, with the anecdote of having played it the night before while on a boat in Bristol, suddenly realising the significance as he sang the line “Unsinkable ships sink”!

The audience also delivered their share of the “deeper cuts” that Joe was hoping for. Billy Graham’s Bible, If I Could Only Fly, The Shade and My Old Friend The Blues were each served up after a quick check between Joe and Brian. Given the nature of the evening, a little stumble over a lyric was perhaps not unexpected. Whenever it happened, it was handled with humour by both artist and the crowd. No-one was there to nit-pick.

She Only Smokes When She Drinks segued neatly into Keith Whitley’s When You Say Nothing At All. Footlights was introduced as both Joe’s and Joe’s father’s favourite Merle Haggard song. As an added aside, Joe mentioned that Haggard wrote the song while in England – a fitting request, then.

By the time he wound things up with Tequila Makes Her Clothes Fall Off, Joe’s shirt was sodden. He’d earned his corn, and the evening had left its mark on both the performer and the gathered fans. Every country artist arriving from the US for the first time says they’ve been told that the UK audience knows the words to ALL the songs, not just the hits. When they see and hear it for themselves it surely finds a place in their heart that calls them back to us. A promise to return with his band is one that he’ll be held to – and it will surely not take another 17 years.