OK, let’s be honest from the start here, this isn’t a country album. It’s a psychedelic, electronic, rock and roll record. However, it was recorded by one of the greatest country artists to emerge in the last ten years, so I think it’s important that we take a look. It’s been three years since Sturgill Simpson last released an LP in the form of the Grammy winning A Sailor’s Guide to Earth. The record shocked some with its use of a horn section and a (brilliant, I might add) cover of a Nirvana song – it doesn’t take much to shock the country community. Since then Sturgill has performed on SNL with Stapleton, busked outside the CMA Awards and produced two of the finest country albums we’ve seen in recent years (both from Tyler Childers). 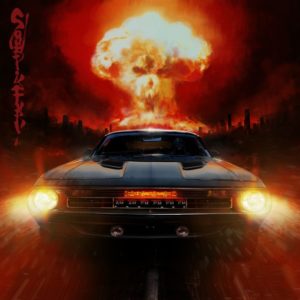 So, what of his new album, Sound and Fury? Well, it’s a curious record. It’s been released alongside an accompanying anime film and Sturgill describes it as ‘sleazy rock and roll’. Right from the atmospheric instrumental opener, Ronin, it’s clear that we’re not in for another High Top Mountain – then again every one of his albums stands apart from the rest. It’s bluesy guitar and stomping rhythm set us off on an intriguing journey. Those who are appalled when country stars don’t make country music, you may wish to exit here…

What’s interesting about this record is that it still feels quintessentially Sturgill. Maybe it’s because A Sailor’s Guide to Earth nodded to something darker and sinister, hell, so did Metamodern Sounds, so we should be used to it by now. It’s his voice that does it, that drawl has been the one consistent throughout each record. The driving and dirty Remember to Breathe has layers of synths and a thudding, relentless even, electronic beat, but when he lets his voice loose it has the same restless anger that any Sturgill song has.

The seamless cut into the lead single Sing Along – feeling like he’s just had enough of Remember to Breathe and drops it like a hot potato – gets you mesmerised. It’s buzzing, electronic and hits you at breakneck speed. The lyrics? Well, this is where it gets interesting, they’re country as hell! “Well, I know you know that you’re killing me/But it’s worth it just to see you smile/Tell ’em to carve my name in the bar stool, baby/You know I’m gonna be here a while”, musically it might not be what we’re used to but lyrically it’s born of country music. Also, props to a brilliant lyric “you’ve done me wrong, now here’s your song, so sing along”. One of the best breakup song lyrics ever? Maybe…

I can’t stress enough how much the lyrics need to be appreciated here, don’t be blindsided by music that you may not have been expecting. A Good Look continues to keep up the pace and has some great electric guitar mixing with bouncing synths, all while Sturgill takes what could well be a hit at country music, “well, everybody’s worried about a good look/but they need to be worried about a good hook”. For a man who once busked outside the CMA Awards with his Grammy sat in his guitar case, recognised by pretty much nobody, he’s got every right to make something different and give a middle finger as he does it.

Make Art Not Friends starts off like Kasabian meets Faithless and quickly turns into something from the Stranger Things soundtrack. Ironic in its title, I’m sure this album could have that mantra at its heart, the lyrics are still of the highest order and give us a little insight into Sturgill’s mindset “I love saying “no” to all the “yes” men/Just to see the look on their face”. He also talks of the world being on fire and it being “time to change up the sound”. Don’t scratch your head wondering why and how this album came about, he’s telling you the entire time.

As much as I enjoy this album, I’ll admit to struggling to listen intently for the entire record. It’s intense and, as I said before, feels relentless. By the time I get to The Best Clockmaker on Mars, a country love song given a blast of something nuclear, I’m yearning for a change of pace. All Said and Done does that somewhat. It’s also another open, honest and raw song. It might not sound it to your ear, but listen to a man who’s worked his arse up from nothing to Grammy award winner, shunned by people at the top of the genre “Handing several items out to anyone who dares/Climb my own way up to the top just to get kicked down the stairs”.

Think this album is purely electronic? Forget it, Last Man Standing is pure Springsteen rock and roll. It’s a welcome change of pace. At just over two minutes long, the drums pound and the guitars are drenched in fuzz. Sturgill points out how “bullshit sells” but he’ll be “last man standing in the end”. Maybe it’s just me reading this as an attack on country music, it might not be, but I really hope it is.

Last Man Standing is over before we know it and the penultimate song, Mercury in Retrograde, kicks in. With a sound somewhere between Queen’s ‘I Want to Break Free’ and The Beatles ‘Ob-La-Di’, Sturgill bemoans life in the music industry, the journos, the fake people, everything that pisses him off. “Living the dream makes a man wanna scream/Light a match and burn it all down/Head back home to the mountain”, Sturgill has not been a happy man.

This album is such an interesting one. It seems to be born of many things. Maybe it’s an urge to explore different sounds, maybe it’s frustration at being a part of a genre like country music, where his talent has never been truly appreciated, and maybe it’s just the sign of a man who’s fed up of the industry as a whole. Maybe its all of that. Musically, it’s not a country album, but lyrically it’s as country as they come. There won’t be many better albums out there this year when it comes to songwriting. Every single lyric is considered and meaningful. The music is different, but it’s good. Most importantly, it feels genuine. We don’t have another Zac Brown on our hands here, it might not be country but it’s very very good. In this situation, a change of sound is not at the expense of quality.

If the way the CMA and other parts of country music have treated Sturgill is the reason he’s moving away from the genre, they should take a look at themselves. As they insist on handing Kane Brown et al as many awards as they want – Sturgill is simply stepping back and nodding towards what we know. It’s bullshit. As he says, its people creating brands.

What’s really sad is that  I fear many country fans won’t give this record a chance. They won’t allow it the time to sit and listen to those lyrics, all while experiencing those 100mph instrumentals carved into a rich tapestry. That’s a shame. Sturgill is one of the best songwriters around and, despite doing something that’s definitely not a country album and doubtlessly experiencing some folks taking issue, he’s getting better and better.

Sing Along, A Good Look, All Said and Done, Mercury in Retrograde

One thought on “Sturgill Simpson – Sound and Fury Album Review: It’s not country, but it is an impressive return from the ‘outlaw’ king”