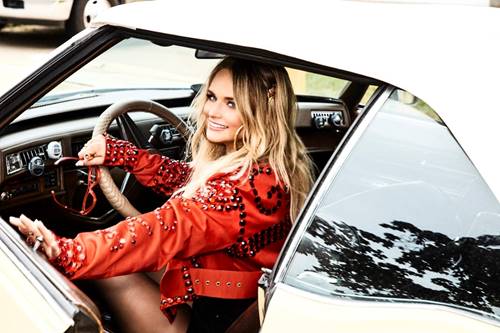 Miranda Lambert has released Texas-tinged standout “Tequila Does” from her upcoming studio album Wildcard, arriving 1ST November. “‘Tequila Does’ is country. And country music makes me happy,” said Lambert of the track. “No matter how rock or edgy or scorned you can get, when you come back to a country song with a steel guitar, it makes my soul feel like it’s on fire.”

Meanwhile, excitement continues to build for Wildcard, with the Tennessean heralding “when Wildcard is released in November, for the love of barstools, Loretta Lynn, broken hearts and your best girlfriends – do yourself a favour and pick up a copy.” Lambert’s first collaboration with producer Jay Joyce, the album features US Top 15 lead single “It All Comes Out in the Wash,” as well as “foot-stompin’ barnburner” (NPR) “Locomotive,” “crunchy, frisky jam” (Stereogum) “Mess with My Head,” “irresistibly catchy” (SPIN) “Bluebird,” “fun-loving” (NASH Country Daily) “Pretty Bitchin’,” and “instant honky-tonk jukebox classic” (Billboard) “Way Too Pretty for Prison,” which features Maren Morris. Listeners can pre-order and pre-add the album to their collections now.

Miranda Lambert will release her highly anticipated new studio album Wildcard 1st November, which includes her latest country radio single, “It All Comes Out in the Wash.” Miranda is currently on her rotating, all-girl “Roadside Bars and Pink Guitars” tour featuring Maren Morris, Elle King, Ashley McBryde, Tenille Townes, Caylee Hammack, and the Pistol Annies. Starting in January 2020, she will embark on her Wildcard headlining tour with special guests Cody Johnson and LANCO.

The most decorated artist in the history of the Academy of Country Music, Lambert is the recipient of more than 70 prestigious awards and special honors: 34 ACM Awards (including 9 ACM Female Vocalist of the Year Awards), 13 CMA Awards (Country Music Association), 2 GRAMMY Awards, the Harmony Award (Nashville Symphony), Artist in Residence (Country Music Hall of Fame), the ACM Gene Weed Milestone Award, ACM Song of the Decade Award, and recently was named 2019 RIAA’s Artist of the Year.

The celebrated singer/songwriter has released six studio albums that all debuted at No. 1 on the Billboard Top Country Album Charts, including the critically acclaimed double record The Weight of These Wings (2016), Platinum (2014), Four The Record (2011), Revolution (2009), Crazy Ex-Girlfriend (2007) and Kerosene (2005). In addition, she released three albums with her trio, the Pistol Annies.

Her clothing and cowboy boot collection, Idyllwind, is a private-label brand sold at all Boot Barn stores nationwide. www.idyllwind.com