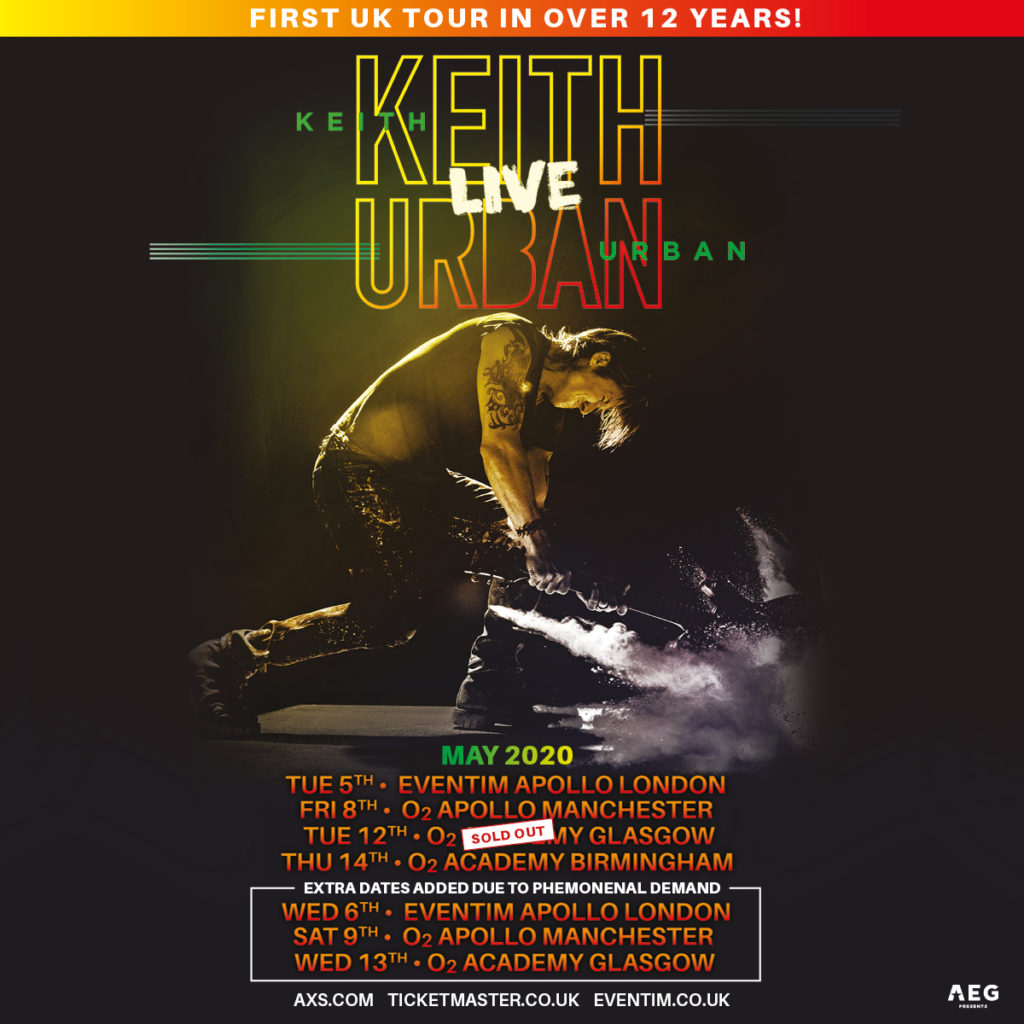 The Four-time GRAMMY® Award winner will play 16 dates across the UK and Europe in May next year,  following on from his hugely successful headline slot at C2C in March and a one-off special club show at O2 Forum Kentish Town, his first shows on UK soil for well over a decade.

With nine full-length studio records, including his most recent GRAFFITI U, four GRAMMY® Awards, and millions of albums, songs, and tickets sold worldwide, Keith Urban is renowned for his electrifying, unpredictable, and ‘no holds barred’ live shows.  A composite musician, singer, songwriter and multi-instrumentalist, Keith has wowed fans all over the world with his high-energy, hard-rocking, live shows and the Keith Urban Live tour will be no exception.  Keith is set to play some of his biggest hits including Parallel Line, The Fighter, Drop Top and Never Comin Down when he hits UK shores in May.

“Our shows in the UK earlier this year reiterated why I love the audiences there so much,” said Urban.  “It’d been a long time since we had played Europe last time – waaay too long.  The concerts we did earlier this year were really special nights for me – total madness – so I’m grateful that we can get back there again.  I’m jonesing to play and so glad it’s happening soon!

To date, Urban has landed 24 career number ones and sold more than 20 million albums. He counts four Grammys, thirteen CMA Awards, fifteen ACM Awards, four AMAs, and a People’s Choice Award among his growing list of accolades. He holds the record for the most consecutive top 10 songs on Billboard’s Country Airplay Chart (38). RIPCORD stood out as not only the second platinum-certified album of 2016, but it also made history. It would be the second time one of his releases simultaneously bowed at #1 on the all-genre charts in the U.S., Canada, and Australia—the only male country artist to do so twice. Beyond an impressive solo discography, his collaborations include The Rolling Stones, John Mayer, Steven Tyler, Alicia Keys, Tim McGraw and Taylor Swift, to name a few.