Hootie & The Blowfish, creators of one of THE sounds in popular music in the 1990’s, played a number of shows in the UK as part of their “Group Therapy” tour. Neil Hallam met up with the band at their Manchester show.

In 1994 Hootie & The Blowfish released their debut album, Cracked Rear View. The album’s blend of jangly guitar lines, solid rhythms, catchy melodies and simple, unpretentious storytelling as delivered by one of the most distinctive voices of a generation was the perfect counterpoint to a popular music scene wallowing in the final throes of the Grunge era. It’s gone down as one of the most successful debut albums in history, selling over 21 million copies in the U.S alone.

After a further 4 original studio albums, Darius, Mark, Dean and Jim placed the band in a hiatus in 2008, returning to the stage together for occasional charity concerts. The hiatus was broken this year when the band announced they would be getting back together not only for a tour, but also for a new album. Following 52 dates in the US and Canada, Hootie closed out their “Group Therapy” tour by coming to the UK for the first time since 1998. I chatted with the guys just before they took to the stage at Manchester’s iconic O2 Apollo.

Guys, it’s great to meet you, and great to have you back in the UK after so long. What kept you?

It’s been 11 years since you began your hiatus. What was the spark or the catalyst that brought you back together now?

Jim Sonefeld – A combination of… I guess desire to get together, and the timing of everybody’s lives too. They both had to sort of meet. We talked about it a few times during the years, but we didn’t have both. Either there was some desire but the timing wasn’t right… So it just took the stars lining up appropriately.

You’ve kept up the charity shows during the hiatus, so you have all been together during that time. Was it just the case that it felt right, now?

Darius Rucker – It came up, like at the 20 year anniversary of Cracked Rear View it was part of the conversation, you know? But it just didn’t seem right, it didn’t feel right for us, everybody was doing other stuff. It just didn’t feel like something that was… high on the list of things, you know. If we’d done it then, you know, I don’t think it would have been as successful or as fun as now, because when we did it now everybody was like, “Ok, this is the time to do it, let’s do it right”. 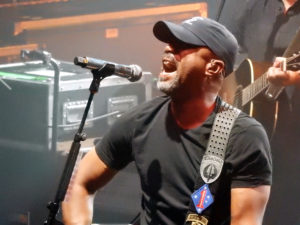 How has it been getting back together as a touring band after so many years? Has that taken a lot of effort, or have you kind of slotted back in to your groove?

Darius – When it comes to playing, I think we’re right back in. Touring, I mean, it’s a totally different life. We’re not kids anymore, you know, our families are touring and stuff like that. This tour is as different as any tour we’ve ever had, but that’s where we are as human beings.

All of your lives have moved on during the “recess”, you’ve all had your own life events over that time. How would you say that has influenced or changed what you’ve all brought back to the band?

Dean Felber – Oh man, I don’t even know where to start with that! (laughs) I mean, physically, mentally, family wise, everything is different I think for most of us, or all of us. But it doesn’t change everything about you either. So we still have this connection that is Hootie & The Blowfish. There’s always something comfortable about that, and that’s never changed or gone away. So even though we’re different, it might come out in our lyrics a little bit, it might not totally. But we’ve just grown up, I think. That’s just the simple part of it, but we still really desire to make great music and play in front of people and be a good band, and that hasn’t changed at all.

I saw in your UK tour schedule you had a couple of small gaps in there… Any time for golf?

Darius – I’m a member at Royal Dornoch. Dean and I went down to play there…

Dean – Up! It was way up!(laughs) We were kind of near Norway!  (* Royal Dornoch Golf Course is indeed on the same latitude as the southern tip of Norway)

Dean – It was a magical day, it was the first sunshine I’d seen in a while (laughs) until, like the second hole.

You do have to take the opportunity for things like that while you’re over here, don’t you?

Now, the new album – Imperfect Circle – due out on 1st November. How different, or how similar, would you say it is to your previous albums?

Jim – It sounds new, but it still sounds like Hootie & The Blowfish. That’s where we’re at. We can’t shake that if we wanted to.

I would agree with that, I’ve heard the album and I would say it has today’s production but it sits very strongly against your earlier work.

Dean – Yeah, you know, there’s a part of it that’s just who we are, and that part’s always going to come out no matter what we do.

Has the long gap between your last album, Looking For Lucky, and the new album brought any kind of excitement, anticipation, any extra pressure even?

Darius – Oh, no pressure. I don’t think pressure was much of a thing that we felt our whole careers, but I think the break took all that off, you know. We haven’t played in years. We haven’t put a record out in years. What are they expecting from us? Probably there were people who wouldn’t expect us to sell any tickets but, you know, we do what we wanna do and we do it the way we wanna do it. If it works, it works and if it doesn’t, it still worked ‘cos we got to do it! (laughs) 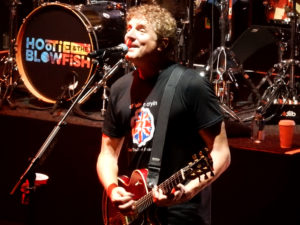 You’ve played 2 sold-out nights at Madison Square Gardens on this tour, which must have been a real vindication for you because, as you say, who knew when you started again what the response could have been?

Darius – Vindication is not the word. Not for us. We were never sitting around wanting to put it in anybody’s faces and go, “Look what we told you”. I think it was more of a triumph for us, that we could go out at 53 and 54 and 52, after 34 years of playing music, and play 2 nights at Maddison Square Gardens. That’s pretty awesome.

Jim – I think it’s more of an expression of where our fans base was, than where we were. We love making music, and so we’ve done it intermittently through the years. But more it was an indication that there was a huge amount of people that were really eager and anxious to see us get back together to tour again. They showed it, anyway.

There’s a strong British contribution to one of the songs on the new album, Wildfire Love, with Ed Sheeran co-writing and Lucie Silvas putting a great vocal on it.

Darius – She did put a great vocal on there.

How did that track all come together?

Darius – Ed, I’ve known Ed a long time, since he did the Taylor tour back in the day. That was when I met him. So we’ve known each other and become friends over the last few years and just tried to get together and write, and we finally got to do it and that’s one of the songs that came out of that session. And Lucie is a friend of our… I’ve known Lucie, of course, but she’s a friend of our producer, Jeff Trott, and he was doing this record. He texted us and said , “Do you guys know Lucie Silvas?”, and I love Lucie. He says “Can I get her to sing on this record?”, and it’s like “Absolutely”. The song was already good, but she took it to a whole new level.

Now, back in the day when Cracked Rear View broke through, the music scene was totally different to how it is now. There’s a sense that you didn’t really get the critical support at that time, despite your sales success. Do you feel that it’s any different now? Maybe there’s been a reappraisal of your legacy over time?

Darius – That’s a good word. And I’m not saying by everybody, or every critic or anything, but I think our tour kinda helped prove that. There are people that are going, “Why did I all of a sudden stop listening to this?”. For us, we’ve just played sold out shows in the United States, one of the biggest tours of the year. That’s the bottom line. It’s not “Why are you there?”, it’s not “Are you coming to apologise for the backlash?” or anything like that. We don’t need that shit, we just wanna play.

Jim – One thing that has not changed is our attitude towards critics, which cannot be shared at this point (laughs)

Mark Bryan – But I think that by staying together and continuing to do what we’ve done, playing our instruments, playing our sound, and then that many people still wanting to be a part of it and see it… That says a lot. We don’t have to say as much once that happens, and that’s nice. So I agree with Darius, it’s not so much vindication as triumph. 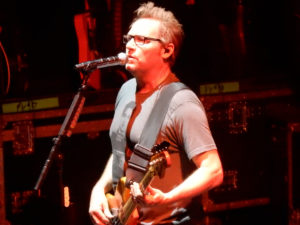 Are you seeing much of an age mix in your audience on this tour?

Darius – There’s a definite age range, and that’s been cool. It’s cool to see kids and their parents, or a group of kids, all out there singing those songs that are twice as old as them. That‘s pretty cool.

Yeah, my niece and her fiancé are fans, and they would have been 4 or 5 years old when Cracked Rear View was released, so it’s been passed down to them.

Looking to the future, if you can… You all have things going on outside of Hootie & The Blowfish. Do you see this as a one-off resumption, or will you look to make it a more regular thing fitting in  and around your other activities? Basically, will there be another 11 year gap?

Darius – I don’t think there’ll ever be another 11 year gap (laughs). We might be playing again in 11 years, but I hope we do it before then. You know, we’re at an age now where you figure out when to do it and when to do it right. Because, you hate to say it but the bar for doing it now is what we’ve set. Every time you go out now, you want it to be that. So, you know, do what you’ve got to do to make it that. 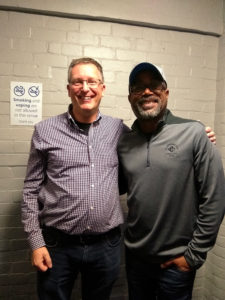 One thought on “Hootie & The Blowfish Interview: We talk with the band before their Manchester show”