Old Dominion originally formed as an outlet for their own songwriting output. For Matthew, Trevor, Brad, Geoff and Whit it was a statement of confidence in both their abilities and their distinctive creative vision. Huge airplay, chart topping recordings and a clutch of award wins and nominations suggest it was a very smart move. A powerhouse live act too, they’ve become popular visitors to the UK. Brian Bennie joined them for a chat in Glasgow, during one such recent visit.

Welcome back to Scotland

Tonight is the final performance of the UK leg of your tour, how has it been so far?

It’s been great coming back. It’s good to see bigger crowds and everyone still singing along. Obviously they have been listening to some of the newer stuff we’ve been putting out too. It feels good to keep building it.

And now closing the tour here in Glasgow

Yeah (Laughing) This is always one of the rowdier crowds and always an exciting one to come to.

You seem to have a real affinity with your UK fans and keep coming back to play for us. Do you see the UK as an important place to bring your music?

I read an interview from the first time you guys came over in 2016, just before you played the afterparty at C2C in London. You were asked if you would ever tour over here and Brad replied “Let’s see if they clap first”

Were you then surprised at just how much the fans over here knew your music and how much they clapped?

Yeah, that was very surprising. We had heard stories, from other artists who had been, that there was a Country Music scene here and that people really dive into the music, but we had no idea what to expect. So, when they were singing all the words and were familiar with our music, and clapped, it was a pleasant surprise for sure.

How have you found the intimate European venues compare to the huge gigs you guys have been doing over in the US?

Every size gig has its own goods and bads. It’s nice to have the people right there in front of you, even if it’s only 500, 1000 people, but I think we enjoy playing all different sizes.

Is it almost like coming full circle, back to when you used to play smaller shows in the US?

Yeah, for sure. When we used to play the small shows in the US though, they weren’t always full. People didn’t know our music. So now, it’s like how you always wanted those small shows to be, you know?

The story goes that you guys initially got together as a method of showcasing your song writing abilities. How does it feel now to see fans all around the world knowing the lyrics you write and singing them back to you?

That’s kinda the ultimate gift for a songwriter. If we were just songwriters back in Nashville writing songs for other people to record, we wouldn’t be able to see that direct impact. You could see it on a chart but you couldn’t see a real person reacting emotionally to the lyrics that you wrote.

Last night there was a girl just bawling during ‘No Such Thing as a Broken Heart’. There was a guy crying during ‘Some People Do’. He was being consoled. You would never get to see that as just a songwriter back home. Now we get to go out there and see that emotional response. Not only people crying but people just smiling and dancing. There’s a lot of times the technical aspect of the song takes over when you are creating it, so then to see the pure emotional reaction to it lets you know you’re doing something good.

We are so proud of the work we put in as songwriters and the careers as songwriters we’ve had outside of this band. It’s a very important part of our journey and a lot of people don’t know it. It’s funny, the bigger you get, the more that stuff can kinda get lost and people just see you as just another band or whatever.

We’ve seen a considerable increase in the number of US Country Artists coming across to play for us in the UK. Is the message getting out in Nashville that there is a big appetite here for the music and its performers?

I guess so, yeah. With the creation of the C2C Festival it’s kinda sparked a little relationship between the States and the UK. I think that with it also being easier to get Country Music Radio over here now, that’s playing a large role.

What more could we be doing as an audience to encourage even more artists to come?

The fans are incredible. The fans don’t need to do anything except listen to the music.  It’s all about exposure. As long as people have an avenue to listen to the music then the number of fans will grow and artists will come. Whether that’s using streaming services or on the radio, just getting that exposure will lead to great things.

You’ve toured extensively over the past few years pretty much around the globe, how do you balance that with family life?

You don’t (laughing) We hold on for dear life. There’s a lot of I’m sorrys. Facetime is imperative.

Except from your family, what’s the one thing from home you miss when touring overseas?

Our own tour bus for one, and the coffee. The coffee I drink is a little different. The coffee is good over here but I miss my coffee maker in my kitchen.

On nights when you’re just not feeling it, you’re missing home and the last thing you want to do is go out and perform, how do you bring it all together to still put on a great show?

One thing you can always count on is that we’re gonna want to perform the show. The rest of the day might sometimes feel gruelling or you might not feel up for it and feel tired but the carrot on the end of the stick is that hour and a half you get to go out and perform for people.

How do you find space for 5 opinions, 5 ego’s, 5 lots of ideas on what’s right and what’s wrong and still gel together so successfully?

It’s a pretty democratic process. We just all try to be as successful as possible. And we’re friends, that makes it easier. We’re old enough to not fuck it up.

When we first started, we had an Attorney sit us down who said “You need an operating agreement so when you guys come to a conflict of some sort or a difference of opinion, you have a plan on how to resolve it.” We were like “Man, we’re never gonna need that” but we signed it anyway and then literally 2 days later …. “Oh, we need that thing now!” (laughing) 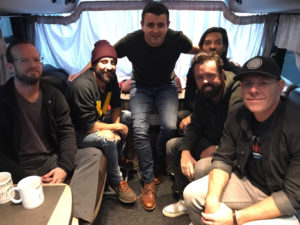 2018 seemed like a real defining year for you as a band. The Happy Endings World Tour, the release of Make it Sweet and winning the CMA for vocal group of the year. How has 2019 stacked up so far in comparison?

I think it’s continued to stay on that trajectory. Obviously winning awards for the first time is a huge deal. In some ways it’s harder to stay on that level, so the fact that we have won a couple more and continued to have new hits out is great. The response to the new album so far has been great, so I’d say it’s been even better and hopefully just keeps getting better every year.

Talking about the new album, it’s being released next week. How would you compare this record to the ones that have come before it?

Finally, will we see you back over here soon?

I imagine you will …. (laughing)