Old Dominion – Self Titled Album Review: We run the rule over the five-piece’s latest record

Since they smashed into the big time with their hit single Break Up With Him from 2015’s Meat and Candy, Old Dominion have been favourites of those who like a little gloss and a touch of pop with their country. A band who undeniably enjoy a fun and catchy hook, they followed it up with the likes of Snapback before returning with No Such Thing as a Broken Heart from the 2017 follow-up Happy Endings. It was very much more of the same from the band comprised of some of the decade’s most successful contemporary Nashville songwriters. With album number three the question was, “What else have you got, Old Dominion?”. The band promised us something altogether more personal but could they deliver, or would we continue to receive what we’ve come to expect? 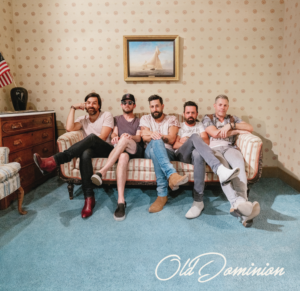 Things kick off with the lead single Make It Sweet, a decent pop-country feel-good song about making the most of your time on earth. Is it decent? Yes. Is it a big swerve from their usual mid-tempo musical direction? Absolutely not. That’s not a dig at the band. Old Dominion do those kinds of songs well, so it makes sense to play to their strengths. The same can be said of Never Be Sorry and Hear It Now. They’re songs where Old Dominion do what they’ve always done. Maybe it’s a little more mature in its themes than some of their earlier work, but sonically things haven’t changed.

I say that things are decidedly ‘Old Dominion’ throughout, but as I mentioned, there has been growth to a degree. We don’t get the kind of teenage lust of Snapback or the somewhat social media-conscious Millennial lingo of Said Nobody. That had to be the case, as a group of artists in their 40s they had to grow or become a parody of themselves. Clearly they’ve tried to strike a deeper chord with songs like One Man Band and My Heart is a Bar. There’s an attempt to say that something there sits beyond sentiments such as “she’s hot” or “I like you”, but it just doesn’t resonate much for me. Maybe it’s the slick production, or maybe the clumsy metaphors to “I’m sad, like a man who doesn’t have anyone, you know, like a one man band” or “my heart is a bar and I’m closing it down, you know, because you use me and I don’t want you to”. Some will love it, but it doesn’t work for me.

With the likes of Smooth Sailing, Hear You Now and Paint the Grass Green, the band amble along with their mid-tempo feel. It’s all just very ‘ok’. Smooth Sailing is probably a highlight, there’s a little more meat on the bones here and a little less gloss. But hey, that’s what Old Dominion are for the most part, nice and glossy. American Style just feels like Jake Owen-lite. Minus the swagger and a certain laid-back coolness that Jake brings. Midnight Mess Around is ok, but if I want something with that kind of sexy soul, other artists sell it a little better to me.

Just as with Meat and Candy, this record closes out with the most heartfelt and powerful song; Some People Do. This is a real flavour of what the band are capable of, it’s another We Got It Right. It’s mature, considered, full of sorrow and wistful. This is the Old Dominion that I really like, dropping the gloss and being real for a moment.

This album is always going to have the ‘not real country’ mob all over it and picking it apart. It’s decidedly pop, soul and R&B influenced, no doubt about that. As a group of songwriters, Old Dominion follow the classic country themes and there are definitely hundreds of acts out there who deserve sticking under the “is it country?” microscope before them (I’m still not sure we ever need to waste time deciding what is and isn’t labelled country. Don’t like it? Switch it off). Matt Ramsey has a voice that leans naturally towards soulful pop. He’s not bringing the growl of a Stapleton, the twang of a Jinks or the deep baritone huskiness of TJ Osborne. He plays well to his strengths and that’s exactly what this album does – it plays to their strengths. I’m not sure Old Dominion will ever produce anything much different to their first three albums, but I’m also not sure they need to. If you want a little fun, this is a perfectly fine record to go for. If you’re looking for something that hits you somewhere deep, keep looking.

Smooth Sailing, Some People Do