As a world famous university city, Cambridge knows a thing or two about FE (Further Education) – but on Friday night (January 31) Brett Eldredge gave the phrase a new meaning as he brought his very own hot brand of fun and energy to the stage at Cambridge Junction.

Halfway through his European tour, he was kicking off the first of his five UK gigs and it was a sold-out crowd who greeted the platinum-selling singer/songwriter.

With a capacity of just 850, Cambridge Junction is a world away from the mega stage at last year’s C2C Country 2 Country festival at the O2 Arena C2C and Eldredge’s sheer delight at being there was apparent for all to see. 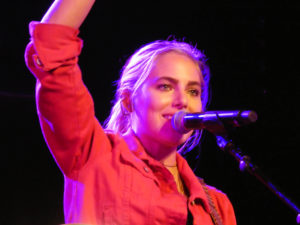 The crowd was more than ably warmed up by Lauren Jenkins, last seen on these shores in September at The Long Road, and she proved a popular choice, kicking off with No Saint (getting the sad one out of the way first, as she put it), co-written with Ingrid Andress, and which is also the title of her 2019 debut album.

My Bar – telling the story of when her ‘cheating ex’ took his new girl into the bar where she was working – was a real crowd pleaser, with other highlights including Running Out of Road, Payday and a fabulous cover of Bruce Springsteen’s Hungry Heart.

For a support act, Jenkins ticked all the boxes (and won Brownie points for mixing with fans at the merch stand during the interval and after the show) but it was Eldredge who was undoubtedly the star of the show.

Arriving on stage with his five-piece band, he cracked off with Good Day before sliding smoothly into Somethin’ I’m Good At from his self-titled 2017 album – a great singalong reminder to enjoy life and not take it too seriously.

Don’t Ya – check out some fabulous guitar work – got the crowd clapping along but it was Love Someone that stirred the emotions (part one) as plenty of die hard fans held out photos of his beloved pooch Edgar and sang along to the chorus. If there’s anyone reading this that hasn’t seen the video on YouTube, I urge you to check it out now for some serious furbaby love.

Taking time to chat between songs, Eldredge told the crowd that since C2C he’d been taking it “pretty easy”, listening to his heart and enjoying some time out to write for his next album, which he says will hopefully be out in 2020.

Written on a beach in Malibu, Crowd My Mind was among the newbies, and its soulful sound combined with the huge reception from the audience makes it look set to be a surefire winner.

Another favourite, Drunk on Your Love switched seamlessly into a lively cover of Queen’s Crazy Little Thing Called Love – keyboard player Ian Miller having his own moment of glory – there weren’t too many people feeling cool or relaxed after that performance. 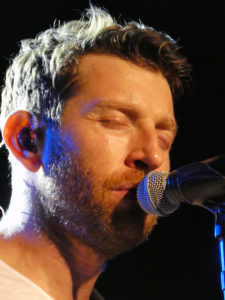 Time to change it down a little as Eldredge sent the band for a no doubt welcome drink before picking up his guitar for two beautiful acoustic songs, the first of which was Raymond, the incredibly touching song inspired by his grandmother’s Alzheimer’s. Co-written with Brad Crisler, it featured on his debut studio album Bring You Back and became his first song to be heard on the radio. Cue emotional moment (part two) when, as he finished, he took a moment to look up to the rafters and you could have heard a pin drop.

The second up acoustic song was The Long Way, prompting him to reminisce on his own afternoon’s ‘long way’ exploration around Cambridge and his disappointment that he hadn’t been able to go punting – except that he needed more than a little help from the audience to get the name right!

With that it was time for the band to come back and turn up the throttle for hits including Lose My Mind, The Reason, Mean to Me and Wanna Be That Song.

Sunday Drive and Beat of the Music brought the evening to an end far too soon before those in the front row were lucky enough to clap hands with the man who had kept them so royally entertained.

“I love you Cambridge” Eldredge declared at one point – and they certainly loved him back. 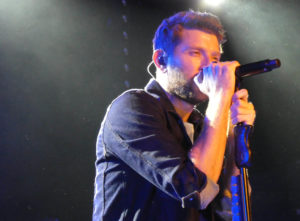