As The Cadillac Three release their hard rocking new album Country Fuzz, PAUL SAMMON takes a listen for us. 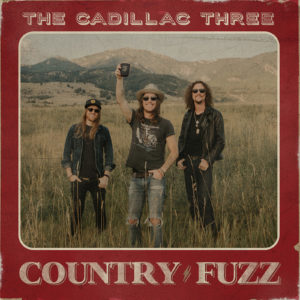 This is the fourth studio release from the rocking Nashville boys, Jaren Johnston, Kelby Ray & Neil Mason. Are they country? Are they rock? Quite frankly, I don’t care and you shouldn’t either.

I challenge you to not tap your toes to the first two tracks, Bar Round Here & The Jam. Ah, who am I kidding? You’ll tap away for the whole damn thing. Over the years since their debut album Tennessee Mojo, they’ve used the same formula, mixing the southern rock sound with slide guitar to carry their stories of, well, quite honestly everything you want to hear about.

This bustin’ album is massively refreshing. It’s sixteen tracks long, so straight off the bat it’s great value for money if you’re paying and not streaming. I’m a red-blooded guy and I enjoy lyrics like “Chuggin’ that cold beer, lovin’ that hot girl, livin’ that slow life in a real fast world” that we are treated to in Hard Out Here For A Country Boy which also features Chris Janson & the legend that is Travis Tritt.

Slow Rollin’ is about cars, Coors, smoking weed and rolling through town nice ‘n’ slow. Just like the cool kids used to do, right? All The Makin’s of a Saturday Night and Crackin’ Cold Ones With the Boys both study in detail the enjoyment brought to one’s life by consuming copious amounts of alcohol. Nothing wrong with that, I feel.

While I hope you can sense my underlying sarcasm and tongue in cheek when referring to behaving to excess, Labels doesn’t require any of that. It’s slower but still kicks it. Essentially the old message of not judging until you get to know someone. Right on.

Back to misbehaving now with Raise Hell. Take it as a warning if you like. “It’s tough to get in Heaven if all you wanna do is raise Hell” Yup, they’ve got a point, I suppose. Take whatever lesson you want from that one but remember you can always go Back Home and think about, once again, going fishing, drinking and getting stoned.

Dirt Road Nights is another slowed down number, reflecting on old friendships and you know exactly what they mean when they say “Hit the gas on the time machine”. It’s just so damn well written.

Another car song, Blue El Camino kicks it up a notch and the tempo is back to toe-tapping f’sure, followed by Jack Daniels’ Heart, posing the question just who did, in fact, break it?

Have you ever had a drunken argument with your other half? Well now you can hear what it’s all about with Why Ya Gotta Go Out Like That. The delivery of “There’s maybe, baby something that I coulda, woulda, shoulda said” is just sublime. Now, if there was a sultry, sexy track on the album I’d say it’s Heat. Its slow and drawn out notes just allow you to picture “the one” and how good she makes you feel.

I probably don’t need to tell you what Whiskey & Smoke is about; however, I will say this, I’m certain it will be an anthem as part of their live sets. The verse pattern reminds me of Boot Scootin’ Boogie but then it kicks ass and the chorus repeats and it’s so freaking catchy.

I’m pretty sure you’ve sussed the theme of the whole thing by now BUT, I have to say, while the topics may appear “samey” each track is arranged differently and none of them are over produced. They are, after all The Cadillac Three.

I am a fan and have been since seeing them open for Eric Church in 2014 at the Shepherds Bush Empire in London. I’m not sure they’ll be to everyone’s taste at C2C next month but I for one will NOT be sitting down on Friday night, when once again they open for E.F.C.

You can buy or stream Country Fuzz from your favourite outlet here :- https://tc3.lnk.to/countryfuzzPR