In an exclusive interview with Six Shooter Country, Drake White announces he’ll be taking to the stage again very soon – if you have a Tortuga Music Festival ticket in your hand, you’ll be one of the lucky ones – as well as preparing for a tour of his own this autumn. And will we see him on this side of the pond? Read on to find out what he has to say. 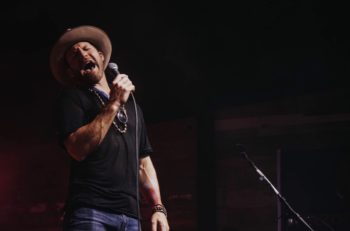 Part one of the interview sees White talking about his road to recovery, how his fans are helping the healing process and why this experience has given him a whole new purpose. Alison Dewar reports.

It’s been six months since singer-songwriter Drake White collapsed on stage at Roanoke, Virginia, precipitating a dramatic and unwelcome temporary break in the career of this award-winning artist.

Soon afterwards, it was revealed that earlier in 2019, he had been diagnosed with an Arteriovenous Malformation (AVM) – an abnormal tangle of arteries and veins in the brain that disrupts normal blood flow – for which he had already been undergoing a series of treatments.

The collapse, later attributed to a haemorrhagic stroke, has seen him undergoing intensive physiotherapy to regain full movement on his left side, with the support of wife Alex and his family, as well as his many fans around the world.

There was good news in January, when he announced via his Instagram page (drakewhitestomp) that his AVM had been completely glued shut and since then, fans have been eagerly waiting for news of his return to the stage, encouraged by a series of posts showing him writing new music, singing and exercising.

During a drive en route to a studio session with friend and former Big Fire band member Jonny Mo, White talks in depth about some of the problems he’s faced along the way and how he hopes to be an inspiration to others:

I’m feeling really good, I’m actually headed over to a write right now, over in East Nashville. I’ve been working really hard and I’m excited about getting back to the stage, I’m walking good, I’m writing a lot, got the mobility in my left hand back, so it’s going good.

You’ve posted that the AVM has healed, do you still you have to go back for more tests?

The AVM has embolised, which means it is glued shut, it is healed. We will go back and get check-ups every two months to view it and make sure the glue and the embolisation is holding. You have to realise there was only a 4% chance that this happened, the fact it ruptured was extremely rare. People were like ‘why were you out there performing’ but they don’t understand, I have to perform.

Of course I’m not going to perform if it’s going to kill me but it could have ruptured with me sitting on the couch. The fact that I was out there, doing what I love to do, had nothing to do with it rupturing, it was meant to happen.

And how are you getting on with your guitar playing?

It’s kinda like walking through quicksand right now, but it’s coming along, I had to kinda relearn how to do a lot of stuff with my left hand. It’s hard, such fine motor skills and muscle memory type stuff, that was the part of my brain that was affected by the haemorrhagic stroke.

I guess some of the songs, they come from your heart and your soul so they’re second nature, they almost flow out of your body…

Yeah that’s right, that’s exactly. When it’s a part of you, when it’s a living being inside of you… this experience is going to magnify it all. The story has thickened, there’s going to be new songs written, obviously about this, but the old songs now mean more and it’s almost like it’s intensified my drive and my passion.

As we push through this, maybe I can help somebody else going through cancer, or going through a stroke or a disability – that’s my whole life purpose. I had that before, now it’s all glorified, it’s all bigger to me and I’ve realised music is such a part of me.

I could be paralysed from the neck down and I would still do it. I’d still figure out a way to do it and that’s the exciting part, the fans are going to get a whole new show and a whole new me and it’s gonna be amazing. We’re working on it right now.

That’s some of the best news that I know the Firestarters, in particular, will be absolutely over the moon about.

What more can you tell me? Are you going to have to break yourself into it gently rather than climbing off the rooftops straight away?

I’m going to do all the things people are used to seeing at a Big Fire show, but then I’m going to sit down and bring you all into the living room type of thing too. The beautiful thing is you’re all helping me heal.

I’m more motivated now than ever and the fans are going to get to witness the power of them, they’ll see me push through learning how to play the guitar, and they are going to help with the healing process. I’ve got to go back…it’s like breathing.

And let me clarify, there’s nothing wrong with my voice, that never got affected vocally. I’ve never looked to get back to where I was, this is not a comeback per se, it’s a spring forward, I’m going to use this to become better than I was.

And you’ll be with your Big Fire band?

I’ve always said, Drake White and the Big Fire is a culture, so anyone who comes in and pulls up a chair at the fire is going to be welcome.

Phil and Adam and Jon, I’m going to write with Jon right now, we’re all still creating. The spirit of the Big Fire is camaraderie and of course those guys have to go and find other work, they can’t sustain their way of life for six months and their families because of this act of God that happened, it was something that nearly killed me. I have worked as hard and as fast as I can work to get back, and it’s been with their support.

To answer your question – yes, those guys will be playing with me, they’ve got some other gigs as well, but they’ll be playing with me and we’ll have fill-ins that are part of the family. Jon Aanestad, my old fiddle player, he may come back and play harmonica – that’s just the nature of our business.

So how long will your fans have to wait?

We’re going into the studio on the 18th to rehearse for a couple of private shows I’m playing in Texas at the end of the month (February). It’s the same culture that you’re used to, I’m going to bring people round the fire, it’s just that I’m going to do it without a guitar – I’ll play harmonica and a tambourine, and work my way into guitars.

We’re playing fairs and festivals through March, April, May, all the way into the summer – including Tortuga Music Festival – so keep looking for them, and then we’re getting everything ready for a big fall (autumn) revival tour.

Does that also mean we’ll be hearing some new music soon?

You’ll see new music in May – hopefully a record, but definitely an EP.

Can we expect some UK dates on the tour?

I’m definitely coming back to Europe, we just haven’t set the dates yet. I feel like we have just begun over there, we’ve built the foundation – I have been to Europe every year for the last four years in some capacity – we came over and played the O2 last year and we’re going to continue to build, it’s just such a big thing for us.

We’re almost bigger over there than we are in the US in a way, Spark is still being played, so the answer is yes, we are definitely coming back, but I don’t have anything that I can announce right now that’s on the books.

Everyone got very excited recently when you did a Cameo and there was mention of The Long Road Festival in September, it sounded as though you were planning to be there?

Well, I mean, that’s the beauty about social media and things like Cameo – one little seed is planted like, that can turn into that. We are going to go where people ask us to go. All this has taught me is man, we have a lot of phenomenal fans, we literally have hundreds of thousands of fans and at this point in our career, all we have to do is serve all the fans. That’s what I’m really committed to for the rest of my life.

In part two of the interview, White talks about battling through the dark days, choosing to take a positive approach, the importance of his faith and how the special times he’s shared with Alex since August have made them stronger. Read it here!

4 thoughts on “Drake White Interview: “This is not a comeback, it’s a spring forward, I’m going to use this to become better than I was.””