The Flying Burrito Brothers have a massively influential legacy in the Country Rock genre dating back to the 1960’s. While those days are long gone, the current iteration of the band now known simply as The Burrito Brothers are still playing and recording. We review their new album, The Notorious Burrito Brothers, out on 27th March. 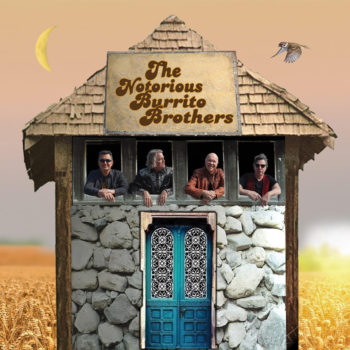 Depending on your persuasion, the mere mention of that word will have you licking your lips in anticipation of tasty Mexican food, or tasty Country Rock. Or maybe both. In either case, it’s an iconic name. And it brings a promise that you expect to be fulfilled. Which brings me to The Notorious Burrito Brothers, the new  album from The Burrito Brothers.

If this album were from some other band with little or no history, you could listen to it and say, “Yeah, that’s pretty good”. But it isn’t from some other band. It’s from a band bearing the Burrito name, and therefore carrying the Burrito history. So when you do listen to The Notorious Burrito Brothers, you’re probably going to say, “Yeah, that’s pretty good, but….”. And that’s the double edge of an iconic name. It will open doors and grant opportunities, but it will also invite comparison and a certain degree of judgement.

Looking back now, The Flying Burrito Brothers are held as one of the key influences in the emergence of the Country Rock genre – even though (or maybe because) their “classic” line-up struggled to make much of a commercial impact. It was in later years that their ground-breaking blend of country and rock styles, along with 60’s themes and ideas, opened a doorway for others to stride through. There’s now a certain reverence attached to their early legacy, much of which stems from their 1969 debut album The Gilded Palace Of Sin, and particularly the input of Gram Parsons, “Sneaky Pete” Kleinow and Chris Hillman.

The accumulation of all that history casts a huge shadow. Anyone would struggle to emerge from under it – even the band itself. There are no original members still with the Burrito’s (Chris Hillman is the only guy still living from that era). They dropped the Flying epithet from the band name long ago, passing through a number of variations before settling on the current Burrito Brothers name. So there’s a couple of disconnects from the past, right there. But on listening to this album, it still seems to struggle to know what it wants to be.

The first 2 tracks on the album, Bring It and Sometimes You Just Can’t Win, are essentially straight-up modern country rock tracks, but the arrangements for each are draped with a late 60’s / early 70’s evocation. Similarly Love Is A River, a near 10-minute track that begins as a pedal steel laden ballad before utilising the classic 60’s sitar trope to lead a transition into other directions, is one long wade through nostalgic waters.

Dark End Of The Street was actually covered on The Gilded Palace Of Sin but where that version had a certain chaotic spontaneity, what we have here has a much more polished production and actually feels closer to the James Carr original in mood and tone – albeit with country-ish stylings. Gilded Palace… featured another Chips Moman/Dan Penn track, Do Right Woman. On this album, we have Do Right Man. It’s a new song, but at the same time it’s another nod backwards. And so it continues through the rest of album.

On reflection, what I really wanted to hear from the album was some degree of experimentation, some kind of twist. There are occasional moments that catch the attention and lift the record but these are fleeting and not sustained across a full track, never mind the whole album. Sure, to experiment would have been a risk. But no risk means no reward. I’m left to assume that the Burrito’s name and legacy is felt to be too precious to gamble with, and I wouldn’t necessarily argue with that. But then, I always thought that the root of that legacy was experimentation, breaking away and the associated daring to risk, to fail, to succeed.

As I suggested earlier the album purely on its own merits is ok, but honestly it’s no more than that. It’s fairly safe, by-the-numbers stuff, and it’s produced and presented professionally. I don’t have to try too hard to imagine that I will hear worse records this hear. But…  Any new release under the Burrito’s banner cannot avoid comparison. After listening to this album a number of times I just can’t decide what the band want to be. It’s neither a classic, nostalgic 60’s tribute nor a wholesale modern take on the genre. It has elements of both, as if it’s hedging its bets. It feels double-minded.

4. Dark End Of The Street

One thought on “The Notorious Burrito Brothers – Album Review”