Ashley McBryde – ‘Never Will’ Album Review: We give our verdict on the sophomore major label release from the powerhouse singer-songwriter 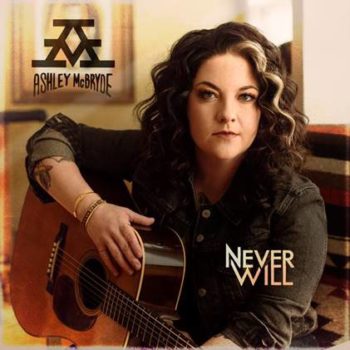 Ashley McBryde has been simmering in the Country Music world for a few years now, and that took a huge leap last year when she blew European crowds away playing the Country to Country Festival. Being in the crowd that night, it was clear to see how humble and genuine this lady is. She has a real passion for music, and that shows in every note she sings and plays.

I don’t want to mention the dreaded ‘C’ word that’s currently wreaking havoc on the world, however it is nice to have this album drop now as I think we all need it.

The opener ‘Hang in There Girl’ couldn’t be more of a prevalent song at the moment! It’s got a traditional ‘Ashley’ sound, punchy beat and rock & roll rhythm which just lends itself to a catchy chorus, something I can easily hear being chanted at her next concert.

‘Shut Up Shelia’ was a surprise and a delight for me. Musically, it’s a little different from what I’d expect, it’s a very emotionally led song, and just lends itself to that soulful voice that we all know and love from Ashley. It builds into quite a heavy rockier number, with a guitar solo that will get everyone up with their air guitars! I dare you to try and resist.

Following from this track is ‘First Thing I Reach For’ and what strikes me about this song is the very traditional country sound it has. The songs leading up to this have all been a little alternative and a little different, but this just oozes line dancing and whiskey! Another track that lends itself to that traditional sound is ‘Martha Divine’, it creeps in with just a drum beat and vocals but has a very catchy chorus that again I can see some two steps going along nicely with.

One thing that we know will feature heavily in any Ashley McBryde song is the ringing of the guitar, its what we know and love about her music. ‘Voodoo Doll’ opens with a rolling drum beat that gets you going, and that soon drops so we have just vocals (which are stunning!) but as the song progresses it takes us on a journey and becomes this heavier rock, almost metal sounding number (I even heard a scream in there too!)

Country Music is known for it’s storytelling, and for me the ability to write a song that transports you to a different place is a song well written. I introduce you to ‘Sparrow’, the first of two beautiful, simple ballads on this album. It’s full of stunning harmony and just takes you away. I suggest you close your eyes and allow yourself to be moved with this song.

‘Stone’ is the other what I’d call ballad on this album. It reminds me very much of ‘Girl Goin Nowhere’, its got that moving side to it, with the expressive vocals that ring through an arena when she performs.

The penultimate track, and title to the album, ‘Never Will’ brings the tempo back up to the whole collection. It’s a punchy number and I think it’ll leave you singing the catchy chorus for days to come.

The final song on the album was a lovely surprise. During this lockdown Ashley, among many other artists, is doing home style concerts online. I have seen many, but I have to say my favourites so far have been from this incredible lady. When I watched her first I sat and chuckled as she sang a song titled ‘Styrofoam’, much like Toby Keith and ‘Red Solo Cup’. I have to admire anyone that can write a song about, well, anything! This is exactly what Randall Clay has done here. It’s a jolly song, and a good way to end the album, providing much needed light relief!

My overall take on this album, is it’s a mixed bag. I don’t deny Ashley’s talent, she’s one of my favourite female artists to listen to. She has an expression in her voice that I don’t think many others match up to, and there are some absolutely stunning tracks here, but for me there are a few that kind of did nothing.

One thing I do know, is that Ashley clearly doesn’t want to be put in a box, and why should she! She has an ability to mix many genres of music into not just one album, but in some places just one song. And for that I take my hat off to her, she manages this well.

I know one thing for certain, this girl certainly ain’t goin nowhere!