The 10-track bundle of foot-stomping fun will drop on Friday 29th May. 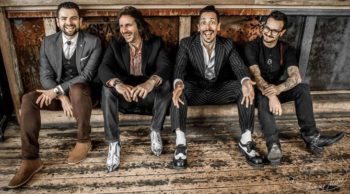 The Outlaw Orchestra formed in mid-2016. The Orchestra brings together David Roux (guitars/lead vocals); Ryan Smith (drums/percussion/vocals); Pete Briley (banjo/lap steel/vocals); and Alex Barter (double bass/vocals). Sounding like they’ve been steeped in moonshine since birth, the band do indeed hail from the Deep South – of the United Kingdom. Southampton, to be precise.

The Outlaw Orchestra’s colourful moniker comes from two things that matter big time to the band; Accomplished musicianship brings the ‘Orchestra’ to the party, whilst their deep-set taste for irreverence, not playing by the rules, rebel hearts and sheer energy bring in the ‘Outlaw’ contingent.

So why ‘Pantomime Villains’? The Outlaws have something to say on that score. “I can’t roll a cigarette, but I can roll a G,” says Banjo Picker Pete, “This is Southern Vaudeville this is a soundtrack for Pantomime Villains”.

“Welcome to the show!” says Dave, with trademark theatrical flair, “We didn’t lie to you, folks: we told you that we had living, breathing musical monstrosities – these songs didn’t ask to get written: seven chromatic notes and the lost chord – now living, breathing sonic enfants terrible!”

“You’ve got to listen BOTH ways before you cross this symphonious freeway. It’s cowtown America meets Sheffield steel; it’s singing for your dinner on the road; it’s Love Songs for Dogs; it’s cosmic anecdotes”.

So, what hooks folk on The Outlaw Orchestra? Ask the biggest crowd ever pulled at Ramblin’ Man’s Rising Stage, or any of the audience from their repeat invitations at the Sheffield O2 because – from club-stage to festival-stage – The Outlaw Orchestra magic keeps on working. From their first outing on a Planet Rock stage, they graced the same bills as The Darkness, Brothers Osbourne and supported Kris Barras on his 2018 UK tour.

Planet Rock flagged up The Outlaw Orchestra as “One to Watch”, and went on to say, “The foursome’s high-energy music is so joyous and imbued with humour that it’s enough to put a grin on even the dourest cynic’s chops… In the live arena… The Outlaw Orchestra are in their element – as anyone who bore witness to their spectacular performance at Winter’s End will attest… We urge you to check them out if you can!”

Listen to The Outlaw Orchestra’s in-studio recordings and you hear committed, talented and spot-on musicians, loving their craft, but in live performance you get the full experience as the band not only belt out their material con gusto, but weave anecdotes and belly-laugh stories into the mix. They’ll leave you with a sore foot from stamping, a sore face from grinning, and drops of devilish outlaw blood running through your veins.

Like many live bands, The Outlaw Orchestra have had to postpone a couple of gigs coming up in the near future, but they’ll be rescheduled. “Until then,” say the band, “we will be playing online gigs and live podcasts whereby you can watch the show at home. We’ll keep you updated on when it’ll happen”. Tune into The Outlaw Orchestra Facebook page and bring your own beer – no taxis needed: The Outlaw Orchestra rides and is coming to you! 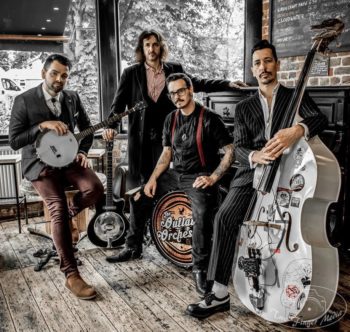