After a very long gestation, Maddie & Tae’s new album The Way It Feels hit the streets last week. We take a listen to this second album from the Girl In A Country Song duo 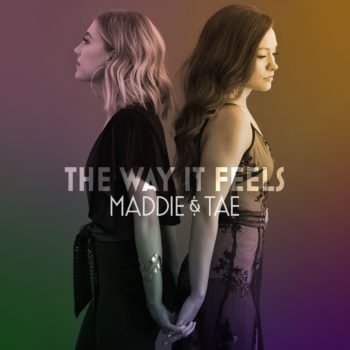 It’s fair to say that The Way It Feels, the follow up to Maddie & Tae’s 2015 debut album Start Here, has had something of a complicated journey to release.

Their first record label, Dot Records, was closed by parent Big Machine Records in early 2017, leaving the girls without a record deal. Eventually they were picked up by Mercury Nashville but momentum had been lost, so we’ve had to be patient for that second album. Seldom can the term “long awaited” have been more appropriate for an album, with a gap of almost 5 years between the two full length releases. The good news is, The Way It Feels is worth the wait.

Through 2019, Maddie & Tae released two 5 track EP’s; One Heart To Another in April, followed by Everywhere I’m Goin’ in October. Now, almost a year after that first EP, we finally have the full album which consists of the tracks from both EP’s, plus 5 new songs. The girls have co-write credits on all but one of the 15 tracks, so there’s a deal of personal investment here. With all the disruption caused by COVID-19 going on, they had to make a decision on whether to press ahead with the planned release date, or follow other’s lead and postpone. After all the years it’s taken to get here it would have been easy to think “Well, a few months delay won’t make much difference”, but releasing it now is absolutely the right move.

You hope to see an artist make some degree of progress and growth from one album to another. Just one listen to The Way It Feels will tell you they’ve made that progress. There’s less of the youthful playfulness found on Start Here. Maddie & Tae are adults now (they’re both 24), and they’re writing songs for adults. That’s not to say the album is sombre, downbeat or overladen with a philosophical heaviness – it isn’t that at all. There’s still a fun loving, high spirited side to the album. What we do have is a collection of thoughts and ideas drawn from the world the artists live in. The older you get, the more you see of the world, the less black and white it becomes and the certainties of youth fall away. Subtelty and nuance reveal themselves through experience, be it your own or the observance of other people. These songs are a window into life in a way that would not have been possible for the duo that delivered Start Here. There’s an edge, something of the brittle harshness of reality to the writing on some of the songs that would have been out of place on their debut album, but it sits right here. If you compare the covers of the two albums, you’ll see the shift clearly. Gone are the two young girls sitting in the back of a truck. Here now are two women, standing tall, hand in hand. No props, but plenty of light and shade. They have each other’s back. They mean business.

Mature themes abound on this album. Their record label travails meant they had to get to grips with the business side of things, probably earlier and more quickly than they might have anticipated. Both Maddie and Tae got married in the last 12 months (Tae’s husband Josh Kerr has a number of co-writes on the new album). They’ve had to work hard to get to the point of delivering these songs into the world. They’ve done a lot of growing up. They’re not the girls who brought us Girl In A Country Song any more. They’re all that, and more. As a result this album is a real joy, with a depth of content and emotion that is often missing from comparable releases.

Die From A Broken Heart has been performing well as a single release, earning a gold certification as it reached a Top 25 chart placing. The song was written shortly after an actual relationship breakup that Tae had gone through, while feelings were no doubt still raw. It captures the whole swirl of intensity, pain, confusion and grief that accompanies loss. With Maddie adding her own emotion into the vocal, the song is nothing short of a triumph.

Water In His Wine Glass speaks of a woman of faith in a relationship with an alcoholic, pleading for some divine intervention. “I don’t wanna lose him | Oh, but he’s already lost | And the only one who can find him is looking down here from a cross | Lord, pour water in his wine glass | Bring the man he used to be back | ‘Cause I wanna look him in the eyes and see someone I recognize”. It’s a classic country song in content and in style, wrapped as it is in a simple arrangement of acoustic guitar and pedal steel and little else. It’s a beautiful track and definitely one of the standout moments from the album.

I Don’t Need To Know is another relationship song, about the rumours flying around of where he’s been and who’s he’s been seen with. The woes of the wronged woman is a familiar country music trope but here it’s presented with modern pop/R’n’B vocal phrasing. Don’t let that sway you one way or another. It would have been easy to put a snap track underneaththis song, it has that kind of pace and rhythm, but you’ll find yourself clicking your fingers or tapping your feet without the help of that production effect that’s become so divisive and, let’s be honest, overused.

A duet with Dierks Bentley will rightly draw the attention. Lay Here With Me is a slow, bluesy ballad told from both sides of a warring couple on the verge of a break-up who maybe, just maybe, could yet pull it back from the brink. “So lay here with me, let down your guard | Let’s take off our gloves and quit making it so hard | ‘Cause you don’t wanna go and I don’t want you to leave | So why don’t you stay, please | Lay here with me”. It’s a perfect example of the kind of heart openness that the songs on this album have come from.

If you’re thinking, “This all sounds a bit dark”, don’t worry. There’s plenty of light to be found. Album opener Everywhere I’m Goin’ is a sweet love song that takes a field trip through the United States as a way to illustrate various characteristics of a lover. “He’s as cool as California | Homegrown like they do it in Georgia | With a heart as big as the Lone Star State | Hard to catch like a Kansas breeze | Strong like a Tennessee hickory |He’s smooth like the bourbon Kentucky makes”. There’s a realxed, confident air to the track, echoing the way you feel when you’re safe in a relationship with someone you love and who loves you back.

Bathroom Floor is an energetic, defiant pick-me-up of a song with a slice of “F*** him!” attitude that anyone in the depths of the break-up doldrums needs. New Dog, Old Tricks takes a confident swipe at lame, overconfident, self-entitled pickup artists trawling bars for a date for the night. The “nah nah nah nah” chanting at the end of the chorus heaps the humiliation on the guys, at the same time guaranteeing that magical crowd participation singability on that glorious day when we can all convene once more for the joy of live music…(deep, wistful sigh)

In an age where argument drags on and on over what is and is not “Country Music”, The Way It Feels hits the motherlode. An album of country songs from country artists presented in a contemporary style, but without severing its roots. Maddie & Tae have kept it country without being isolationist. It’s not so much a merging of styles or a blending of genres. It’s not pop music pushed onto a country audience. It’s modern country music. It really has been a long time coming, but it’s a triumphant return by any standards.

Maddie & Tae – The Way It Feels