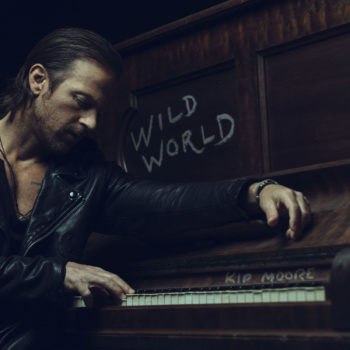 Co-written (with Westin Davis) and produced by Moore, the track provides fans with another glimpse into Moore’s highly-anticipated forthcoming release, out May 29th via Snakefarm Records in the UK.

The song is available to listen to here.

The sturdy “Southpaw” stands as a grunge-rocking manifesto for the proudly out of touch, rejecting the notion of “going with the flow” and showcasing just how Moore stands apart in today’s Wild World.

Moore also shared the stripped-down, emphatic acoustic version of “Southpaw” as the next instalment in his “IN THE WILD SESSIONS” video series, available to watch here. Directed by PJ Brown, the stunning video was shot in the heart of Red River Gorge in Kentucky. Last week, Moore debuted the first episode of the “IN THE WILD SESSIONS”, which featured the singer/songwriter performing the album’s title track in the Mojave Desert in California. More videos set in both locations will be unveiled in the following weeks.

“’Southpaw’ started from a feeling of being on the outside looking in on modern society,” explains Moore. “I don’t want my edges to be smoothed to fit into a box. I woke up the day we wrote it feeling like I was born in the wrong era. I grew up a boxing fan and a Southpaw was always a rare sighting, unpredictable and hard to prepare for. I wrote the song with Westin Davis in South Dakota and we’ve always understood each other like brothers and being kind of cut from the same cloth. I knew he would get my headspace that day and he always brings the magic. And on the recording side of things, I don’t think I’ve ever felt so much juice in a session.”’

Co-writing all but one of WILD WORLD’s insightful tracks, Kip Moore navigates the search to find a place and a purpose. Throughout the 13-song collection, that search is revealed in deeply personal terms, with Moore even self-producing the set, with help from David Garcia, Luke Dick and Blair Daly on respective tracks. The weathered heartland-rock sound Moore has embraced on previous efforts gets its emotional volume pumped up here; the tracks are essentially recorded live with a full band, allowing substance to trump style and the timeless to prevail over the trendy.

Kip Moore has toured the world headlining his own shows, earning acclaim and a rabid fanbase as an all-in performer in each setting, and most recently wrapping 40 sold-out headlining shows in the US, the UK and Canada. Praised by Noisey as “an uncompromising, genre-defying artist firing on all cylinders”, Moore has blazed his own trail.

The current CMA “International Artist Achievement Award” nominee first splashed into the mainstream with the double-PLATINUM “Somethin’ ‘Bout a Truck” in 2012, then followed up with three more best selling No. Ones (“Hey Pretty Girl”, “Beer Money” and “More Girls Like You”), a trio of ambitious, critically-praised albums plus two gritty EPs that landed him on multiple “Best Of” lists.