Within 24 hours of Drake White launching his new EP Stars (coincidentally in the same week as a meteor shower), it skyrocketed to number 1 on the iTunes country album chart, marking a superb return to form for this most soulful of country singer-songwriters.

It was also a very poignant moment, coming less than nine months since Drake collapsed onstage, the result of an Arteriovenous Malformation (AVM) in his brain. Always determined to fight back and take his rightful place in front of his loyal fans, he recently started performing again and (pre-coronavirus) had a full timetable of gigs, fairs and festivals lined up. 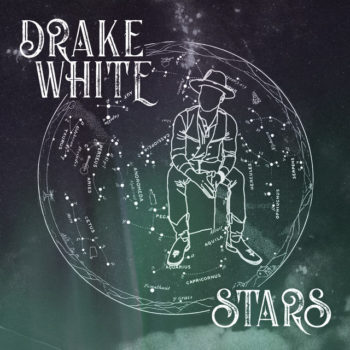 With the pandemic changing the shape of the world, Drake has been busy online with his “Drake White Wednesday Night Therapy” sessions – check them out on his Instagram page and YouTube– and he also brought forward by a week the launch of his new EP Stars, telling fans he couldn’t wait to share the new music.

The man himself says: “There’s been a revival in my heart and my soul. I feel an overwhelming sense of joy and gratitude towards my maker, my life, and the simple things. People are going to hear that in my new music. They’re going to see it in my shows. The excitement never left me; it’s just greater now. I walk onstage these days and feel so thankful to be there — to be able to do what I love to do.”

Stars was recorded with Drake’s good friend Jaren Johnston (The Cadillac Three) and released on his own record label imprint Reverend White Records.

Regular readers will know that Drake has always had plenty of fans here at Six Shooter Country – so hear what Paul Sammon (PS) and Alison Dewar (AD) have to say about this latest addition to the Drake White catalog.

PS: For you to truly appreciate the effort and passion that’s gone into this EP you need to understand the man himself. Check out Alison’s two-part interview with him here to see that the release of Stars is all part of Drake’s healing process.
https://sixshootercountry.com/2020/02/16/drake-white-interview/

At five songs long, you wouldn’t think it would take up much of your day to listen to it. You’d be wrong. Once you’ve played it for the first time, you’ll put it on repeat so you can decide which your favourite song is.

AD: In these ‘new normal’ times, Drake has delivered an EP packed with some of his best music I’ve heard since 2016’s Spark and I’ve been hitting replay so many times it’s almost embarrassing. Drake has promised more songs to come in 2020, he’ll already have a job on his hands to better these.

Luckiest Man
PS: Starting with a whistle and a hum, Luckiest Man is quite chill and easy to see who it’s about. In essence, no matter what happens, despite all the unlucky events that happen in the song, he’ll be alright because he has his wife by his side. It’s a good opener and it’s just preparing you for what’s to come.

AD: Channelling the reggae vibes of Bob Marley, this catchy track has what Drake calls a “cosmic cowboy” effect. You’ll be tapping along before you know it and who wouldn’t love the line ‘Your love is like a lottery, I’m always getting paid’. This song is earworm heaven, it’ll get inside your head.

Mix ‘Em With Whiskey
PS: Mix ‘Em With Whiskey puts you in a bar, sat on a stool next to him as he recites good and bad things about life and how ‘Some things just go better when you…’ You get it. It has a nice, bluesy feel and you’ll find yourself nodding in agreement as the song flows along.

AD: Find me a place on that barstool too please…a real crowdpleaser, uncomplicated, with a mellow riff and a slower beat leading to a rousing crescendo hook that will have the fans begging for an encore.

Eat, Drink & Dream
PS: Bumping it up now, Eat, Drink & Dream gives you advice about living your life to the full. Throw away your bad feelings, have faith in yourself and what you want to do then enjoy the journey while you ‘Live, love laugh, eat, drink & dream’. Guaranteed to make you smile as you find yourself thinking of something you want to do. Go on. Do it.

AD: This is SUCH a Drake White song – a tongue-twister of note, with a nod to his renowned freestyle sessions – my favourite lyric ‘Imagination is like a telepathic way into your future; you can be a passenger or you can be a chooser’, is just a brilliant line. Talking about this song, Drake says it’s all about having the energy and the power to keep going and this is the perfect tribute to living life to the full.

My Favourite Band
PS: Ok, so you can either go listen to My Favourite Band right now, or just know this might contain a spoiler. One of the things I love about country music is the clever use of double meanings. The title lets you assume one thing then the singer will surprise you. I can tell you now, every cover band that does weddings is working this song into their set as we speak. It’s a great tune with a great beat and the name dropping of amazing artists leads you one way, then boom… Seriously, just go listen to it. It’s so good.

AD: I’m going to take a leaf out of Paul’s book, but with a little teaser – Springsteen, Janis Joplin, Merle, ZZ Top,Patsy Cline. They’re all in there…enough said…very clever.

All Would Be Right With The World
PS: The final offering on Stars has been brought from the Drake White and The Big Fire Live EP into the studio. All Would Be Right With The world is a perfect inclusion when we consider what’s going on across the planet right now. A very much “wouldn’t it be great if…” sentiment, you’d be forgiven for thinking it had just been written, but it’s actually a year or two old. The song demonstrates just how Drake has it all together and how he understands the mind and heart of the listener because you’ll agree with pretty much most of the words in the song.

AD: I’ve always loved this song and indeed, if you wanted an anthem for today, this should be it. Drake describes listening to it as one of his coping mechanisms and how, when he was recovering from his stroke, it would take him back to happy times on the Coosa River, Alabama, where he grew up. Originally written to capture what Drake calls “my heaven and what I think heaven looks like”, it only made the EP at the very last minute as a replacement for Free, which had been cut by another artist. Jaren Johnston’s expert craftsmanship ensures this is back porch country soul at its very best.

In conclusion
PS: I can’t even criticise the fact this is only five tracks long. I wish there were more, but this needed to come out now and I’m glad we didn’t have to wait. This man loves his fans (I’m one, can you tell?) and he knows they wanted something. This is as much for him as it is for them because it’s just another part of his journey and he’s invited you to tag along. And life’s about the journey, not the destination, right?

I hope you enjoy this enough to listen back through his older tracks and I implore you to buy a ticket to see him live. He’s something else when he’s on stage. But that’s for another review, another time. Meanwhile, check out his Wednesday Night Therapy live-streams and get really acquainted with him.

AD: Stars is packed full of powerful country soul – this is ‘new’ Drake White at his best. Don’t miss it.

3 thoughts on “Drake White shoots for the “Stars” – EP Review”