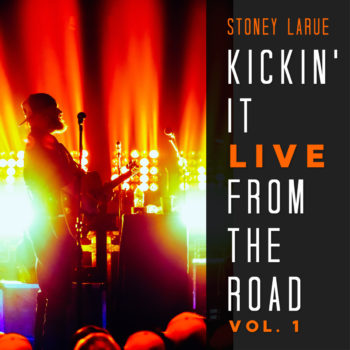 For over 20 years, Stoney LaRue has remained one of the most dominate headliners laying down his specific brand of Red Dirt rock across the highways of the country. His lengthy tenure is studded with sold out shows , high charting albums on Billboard, iTunes and the Texas Regional Radio Chart, featured videos on CMT, a debut performance at Nashville’s renowned Grand Ole Opry and over 1 million albums and singles sold to date.

With all music concerts on hiatus for the foreseeable future, music fans are desperately missing those nostalgic moments surrounded by the kind of sights, sounds, smells and excitement that can only be found in a live music venue. As luck would have it, LaRue has been recording some of his live performances over the last two years with the plan to release a live album series in the future.

With the arrival of the global lockdown, that future is now the present. On April 27th, LaRue will release volume 1 of this live album series “Kickin’ It LIVE From The Road.” The album will be available solely on his website (www.stoneylarue.com) and will feature live versions of some of his signature tunes that have never before been released. 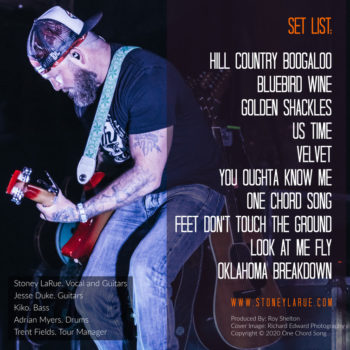 With no overdubs or technical polish, this album is raw and captures the crisp, clear and delectable taste of LaRue’s live show. The album will be available on Spotify, Apple Music, and other streaming outlets this summer. Physical copies will also be available for purchase this summer. In the meantime, LaRue’s hot ticket show will now come directly to you.

Throw away any preconceived notions you might have about country singers —especially ones from Texas — because Stoney LaRue smashes them all. He is a deft songwriter, informed traveler and self-aware philosopher, a troubadour who converses just as easily about Indian yogis and gurus as he does about Texas barbecue and dance halls.

Forging connections with his fans is paramount for LaRue, who plays more than 200 live shows a year. His base is a fiercely loyal one, and not just within the Red Dirt region. He regularly tours throughout the entire country and has fans in some unexpected places. Chalk up his mass appeal to the way he sells his songs both onstage and on record — to listen to LaRue sing is to hear someone with whom you share an experience.