American Aquarium – ‘Lamentations’ Album Review: We take a listen to the latest release from one of the great modern songwriters

The last album from American Aquarium, Things Change, came at a time of political turmoil and great upheaval for many people in the United States. So, it’s with great irony that Lamentations arrives at a time where the political controversy is ramping up amid a pandemic and America stands on the edge of another election. BJ Barham is one becoming one of the great political and social commentators in music, so it stands to reason he’d have a lot to say at the moment. 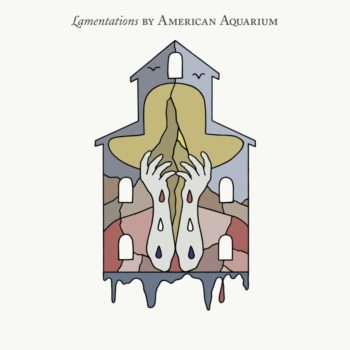 The record kicks off with the seven minute long (almost) title track Me + Mine (Lamentations) and wow does this thing hit the ground running politically speaking. Barham remembers the backbreaking work his ancestors put into industry, only for it to be taken away from them “Then they showed up, they shut us down, Same old story, the same old town”. He doesn’t stop there though, Barham takes aim at politicians (with a reference to George Bush Jr. and his failed ‘fool me once’ speech), how he feels people have been cheated and how he’s lost faith in the American dream, “And then a politician shows up, Promisin’ that, He’ll return the jobs, That God himself could not bring back, Fool me once, shame on you, Fool me twice, shame on me, Yeah, that’s the day I gave up, On the American dream”. It’s a statement of intent from an album that will pull no punches.

Before the Dogwood Blooms is full of whirling pedal steel and tells the story of a working class man desperate to be home but having to take another job just to pay the rent, telling the story of the struggles in heartland America. There’s a similar vein in Brightleaf + Burley, a song that tells the story of America’s tobacco growers, the main industry in Barham’s home state.

It’s not just political and social commentary offered on this record, Barham is a master of exposing his own flaws and telling his own story. Like any great songwriter and in a similar vein to the great Jason Isbell and the late master John Prine, he isn’t afraid to take parts of his own story and put it into a completely made up narrative. Six Years Come September tells the story of someone who’s lost everything and looks back at what he could have done differently, as Barham sings “I ain’t had a drop to drink, since the day that you left me, six years since September I’ve been cursed with this clarity” you can guess he might be referring to his own sobriety. Now a happy family man, one wonders if Barham is speaking of what could have been.

American Aquarium are a band who can pull at the heart strings, but also know how to tear up a rock song. Starts With You is a driving rocker that gets the foot tapping, there’s a hint of Steve Earle to this one. It’s an upbeat ode to finding the person who changes everything for you, “Ever since I met you, you changed my way of thinking, I don’t a day that doesn’t start with you”.

One of the early releases from the album, The Luckier You Get, is a rousing and upbeat autobiographical moment for Barham. He sings about dropping out of college, picking up a guitar and trying to make a living from music, with the rousing chorus declaring “the harder you work, the luckier you get, the more you get done, boy, the less you’ll regret”. Barham is well-known for writing lyrics around the plight of the working man, but this flips that story of hard times on its head and reminds people of the true secret to success – hard work.

The Day I Learned to Lie to You is a stripped-down piano ballad with a heartwrenching message. Barham sings about the promises made early in a relationship, about becoming an honest man and standing by someone, but how these plans often go awry. The instrumental section brings in a beautiful subtle horn section alongside an almost  Beatles ‘White Album’-esque guitar solo. This song is one of the most honest depictions of marital harmony gone wrong that you’ll find in a song.

Barham’s passion for the south is clear again on A Better South, where he sings about how “down here we’re still fighting for all the wrong reasons” and “on the right side of history, we’re always late”. It’s an upbeat rocker of a song that acts as a call to arms for those in the southern states to pull together and make their home a better place. The musical interlude features a great guitar solo full of twang and an organ solo, both of which ride the wave of this upbeat and driving song.

The penultimate song, How Wicked I Was, is a real heartbreaker. Barnham sings about his daughter and begs that nobody tells her how wicked he once was. As a parent, he asks that nobody tell his child the true extent of his past. For any parent who regrets their past before children, this story is a dagger to the heart. As Barnham sings “I’ll pull her close, I’ll hold her tight, I just hope she never sees, the only monster in this house is me” over a simple arrangement, you can feel the love he has for his daughter, the regret that he feels and the resignation that the day will come where he must “pay for all this damage I’ve done”.

The album closes out with the hopeful The Long Haul. Another seemingly autobiographical song, Barnham sings about his battle with sobriety, how critics accused him of losing the edge in his music and how people told him to quit and give up. An anthem for those chasing a dream, Barnham stands tall and defies critics singing “I’m in it for the long haul, I’m here until the work is done, I ain’t ever been the kind of guy that’s gonna cut and run”. It’s about more than just the music though, it’s about finding people who are in it with you for the long haul (“see the hardest part of getting sober, is learning a drinking buddy ain’t the same thing as a friend”), and being there yourself, committed to those people that matter.

Lamentations is a superb follow up to Things Change, an album that we loved, and Barham et al certainly don’t slow down here. With Shooter Jennings on production duties, the record retains that hard-edged sound we expect from American Aquarium with a few different sonic elements, such as the introduction of a horn section thrown in.

Lyrically, this record only serves to cement BJ Barham as one of the most relevant voices in modern American music. Whereas Things Change followed huge political change in the States, Lamentations shows Barham having a somewhat wider scope to his reflections. Politics are still very much on the radar, but also our own personal inner politics come into range. Barham sang a lot about change on the last record, now he dives deeper into regret. Barnham has spoken about how the literal definition of the album title is “the passionate expression of grief or sorrow” and that’s what he shows here in spades. But he also shows that grief and sorrow aren’t necessarily negatives, The Luckier You Get points to hard work and a can-do attitude being a way to escape these feelings.

At this point, comparisons between BJ Barham and Bruce Springsteen are nothing new. As lyricists, they wear the working mans hat to explore human nature and provide social commentary. In a time where we need important voices to be a guiding light more so than ever, BJ Barham and American Aquarium shine bright. If country music is three chords and the truth, this is more country than anything I’ve heard in years. These lamentations are gonna be the making of him…

Me + Mine (Lamentations), The Luckier You Get, How Wicked I Was