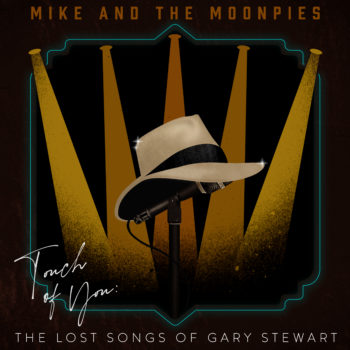 Produced by Adam Odor, the project features ten previously unreleased songs written by outlaw country music legend, Gary Stewart. Originally slated to come out later this year, the band finished the recording process working remotely from their home studios throughout Texas and at yellow DOG Studios in Wimberley, Texas, and were able to bring the release date forward to coincide with Stewart’s birthday on 28th May.

Special guests and highlights on the album include a sublime duet with Mark Wystrach from Midland (Smooth Shot of Whiskey); harmony vocal help from Jamie Lin Wilson (Heart A Home), Courtney Patton (Heart A Home, Dance With Barbara) and Zac Wilkerson (The Gold Barstool); and Dave Percefull on piano (Heart A Home).

Dubbed the “king of honky tonk” by Time Magazine, Stewart co-wrote all songs featured on the album throughout the late 1970s and 1980s. A year and a half in the making, Mike and the Moonpies frontman Mike Harmeier has been working directly with Stewart’s daughter, Shannon Stewart, and best friend Tommy Schwartz to honor Stewart’s legacy in the right way. The result is a striking, nostalgic balance of sultry guitar licks and mesmerizing pedal steel, unwavering barroom anthems, haunting balladry and Harmeier’s impressively smooth cadence and vocal range.

“The music of Gary Stewart has been the driving influence of our band from the first notes we played together,” says Harmeier. “Hearing demos of songs spanning Gary’s entire career was a treat in itself, but getting Shannon Stewart and Tommy Schwartz’s blessing to put our Moonpies twist on these songs is an honor and privilege we’re extremely proud to finally share with everyone.”

A native of Florida, Stewart’s unique vibrato and masterful songwriting has influenced everyone from Bob Dylan to The Clash. Stewart first gained notoriety in the mid-1970s after signing with RCA Records, releasing a string of hits including Drinkin’ Thing, Out of Hand, She’s Actin’ Single, I’m Drinkin’ Doubles, and Quits. His album Out of Hand (1975), which reached #6 on the Billboard country album chart, has since become one of the most critically acclaimed country albums from that era earning high praise from Rolling Stone, Village Voice and more.

In 1980, Stewart released Cactus and a Rose which featured Southern Rockers Gregg Allman and Dickey Betts followed by his final two albums with RCA in partnership with Dean Dillon. Stewart continued to tour through the 1990s, playing venues such as Billy Bob’s in Ft, Worth, TX several times a year. Before his passing in 2003, he released his first live album Live At Billy Bob’s Texas. For more Gary Stewart information and merchandise, please visit http://garystewartstore.com/

A portion of sales from the album will go towards MusiCares.

Touch Of You – The Lost Songs of Gary Stewart Track Listing