Running Back To You is the latest release from Welsh country-blues and soul singer Laura Evans. Having gone straight to number one in the UK iTunes Blues Chart, it is the first single from her forthcoming EP due out at the end of July. This should have been a big year for the girl from the valleys – a sell-out gig at Pizza Express Live, a host of summer festivals and gigs, but instead she’s making the most of her time writing new songs ready for a full album planned for next year.

Six Shooter Country talked to Laura about her musical heroes, her debut at Nashville’s famous Bluebird Cafe and why the ‘day job’ of corporate gigs helps to make her a better singer. Alison Dewar reports. 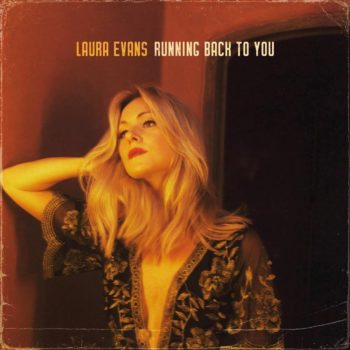 Congratulations on the new single. I’ve seen it described as modern yet vintage, with ‘hints of Fleetwood Mac meets Duffy’, tell us more about it.

I’d been on a writing trip in Nashville before heading to LA for a few days and when we got back, I had about 10 songs. I write ballads and heartfelt love songs all the time, so when I do write something more upbeat and radio friendly, I get a bit excited.

I recorded it in down in Plymouth, my producer is an amazing guy called Josiah Manning. We brainstormed and when we started producing Running Back To You, I was like wow, this has kind of a new sound that I haven’t really discovered before.

It hit number one on the UK iTunes blues chart rather than the country chart, was that a surprise?

I’ve made lots of country music and I love blues music. Do we say it’s Americana, or blues or country – I think we’ll let the people decide, I didn’t want to box myself into any genre.

Will we need a box of tissues for the other songs on the EP?

I would say this one and the next one are probably the most upbeat. Then I have a very, very heartfelt country song about my home, and a soulful ballad that I wrote with Jenn Bostic in Nashville, like a gospelly-feel, but there’s definitely a mix of country and soul and blues running through this record.

The gig cancellations must have had a big impact on your plans for promoting the EP?

Yeah, the week of lockdown I had my best gigs, a sell-out show at Pizza Express, more gigs that weekend and it all got cancelled. I was meant to play Buckle & Boots and I was really excited because I hadn’t played there before, it was great they decided to do a virtual festival instead.

How have you been filling your time in lockdown?

I write a lot on my own, I love writing with other people but because of the lockdown I’ve been a bit more productive as a solo writer, it’s kind of forcing me to get creative. I’ve been recording some stuff, like an acoustic version of the single and an acoustic video to go with with it. My life isn’t that different, it’s only that I’m not going out and playing songs.

I’ve been travelling back and forth to Nashville once or twice a year for about eight years – people think these things happen overnight but they don’t – and the last four trips have probably been the most rewarding, the more people I’ve met, the more songwriting rooms I’ve gone into.

I had a writing session with Jeff Cohen, who’s a very influential songwriter, and we wrote a really pretty song. He said I’m playing the Bluebird tomorrow night, why don’t you come, I’ll call you up and we can do this song.

I was only in Nashville 10 days and it was like my fifth day, I was beaming. I had been there before and queued up to sit and watch my favourite artists, so it was a lovely moment. The song was so new, I had the words written out on the floor on a piece of paper – I am so grateful to Jeff because he made that happen and it was really magical.

I think it was Chepstow Castle supporting The Shires and it was sold out. I toured with a country show in Australia and we played the Sydney State Theatre and we sold that out, which was pretty amazing.

How did you end up touring with Ben and Crissie?

I just knocked and knocked at the door several times. I knew they were looking for a support act and so I kept emailing and eventually the guy running the show in Chepstow said we’d love to have somebody Welsh. It was kind of luck, but I did keep on because so many people wanted that slot.

Where do you feel you best belong – a smoky bar or a big festival?

I love big festival gigs and the atmosphere but in terms of performing, I love the smaller room. Singing with an acoustic guitar at the Bluebird when people are listening to every word, as a songwriter and an artist it doesn’t really get better than that.

The EP will be out at the end of July and we were planning to tour it, but maybe that won’t happen until next year now. There will be an album around March next year with 10-11 songs, so as soon as lockdown is lifted I will probably go back in the studio and get that recorded. Then hopefully next year, we’ll be playing shows and I’ll tour the record.

Who were your idols when you were younger?

I loved people like Whitney Houston, Mariah Carey, Michael Jackson, I was brought up on Motown, my auntie and uncle used to sing a lot and everything was pop and soul. On our record player I used to listen to The Eagles and people like Stevie Wonder. In my teens I was slightly obsessed with country, LeAnn Rimes and Faith Hill – I loved all that – now it’s people like Lucie Silvas, Brandi Carlile, Maren Morris…I like to think that you can hear all my influences in the songs.

Who would be your ultimate person to tour or collaborate with?

Is music your full-time ‘job’?

Yes, it is now. I also do a lot of corporate gigs and the odd guest spot entertaining on cruises. I’m an actress too, and I do panto every year, over the last two years I’ve been lucky enough to make it all work.

The corporate work is like a day job because I sing all the covers – people like Stevie Wonder and Whitney Houston, it helps make you a better singer. I would love to sing my own stuff every week but unfortunately that doesn’t always pay the bills.

And finally…given you come from Wales, I can’t let you go before asking if you’ve ever met Sir Tom Jones or want to sing with him?

Oh my God – I absolutely adore Tom Jones, I’ve never met him but I would love to. I’m a big fan – I’m from the valleys so he’s like our hero.

A great note to end on…Laura, thank you for talking to Six Shooter Country.