Whether born by accident or design, or a happy combination of both, Rumer’s Nashville Tears is an album that simply works – and works brilliantly.

Sometimes great things come about by accident, sometimes by design. In the case of Rumer’s Nashville Tears, it’s a happy combination of both. During her time living and raising a family in the American South, Rumer had the idea for an album to showcase previously overlooked songs from Nashville songwriters. She and her producer Fred Mollin, while searching through a deluge of song submissions, chanced upon a piece by Hugh Prestwood . From that point the album shifted focus as the pair delved deeper into Prestwood’s catalog (You can read more about the origins of the album in my interview with Rumer). As a result of that pivotal decision, they’ve delivered a modern classic.

Hugh Prestwood is by no means an unknown writer in country music circles. He’s a Nashville Songwriters Hall Of Fame member and his work has been recorded by the likes of Trisha Yearwood, Alison Kraus, Randy Travis and Crystal Gayle, to name but a few. Although he’s written his share of hit records over the years, it’s probably fair to say that he’s likely to be an unfamiliar name to most fans of modern country music. He has a romantic style of writing that takes it out of step with much of the current popular trend for a more direct lyrical approach. In fact, his strong use of metaphor is one of the key points of his writing. That helps to create some striking images in his songs – but you have to be prepared to listen to them to find and appreciate that layer. Rumer has shown over her career that she’s genuinely skilled at identifying songs that, both lyrically and melodically, don’t simply suit her voice but that she can elevate and add to. It’s impossible to think of the Bacharach & David song The Look Of Love, for example, without hearing Dusty Springfield’s classic recording – but Rumer’s version brings something that’s already so up-close-and-personal and somehow makes it even more so.

In Rumer and Mollin, it feels that Prestwood’s songs have found a natural home. Mollin’s production creates some simply gorgeous soundscapes in which to set the melodies, painting the scene before even a note is sung. Rumer’s voice, that ever-so-slightly breathy alto, at times almost whispers Prestwood’s words into your ear, like an innermost secret shared with a trusted confidant. Take the album’s opener, The Fate Of Fireflies, as an example. A layered orchestral string intro eventually gives way to Rumer’s vocal over a picked acoustic guitar and soft percussion. It’s a song about intimacy, using the imagery of fireflies unable to find each other because of the distractions of the modern world as a metaphor. It’s such a light, gentle and romantic thing that it almost tiptoes inside as you’re listening to it. It’s a wonderful track to open with, and sets a high standard that thankfully is maintained throughout the album.

Ghost In This House is one of the more well known songs on the album. If it’s possible to have more than one “definitive” version of a song, this one already has two (from Shenandoah and Alison Kraus), each different from the other. Rumer’s recording can now be added to that definitive list. It’s different again, drawing still greater pathos and yearning from an already tragic story. I dare you not to be moved by it. Heart Full Of Rain has perhaps what many will regard as the most “Country Music” treatment on the album with fiddles, steel guitar and countrypolitan-style strings in attendance, and it’s every bit as much a tearjerker as Collin Raye’s original recording. Here again, Rumer’s voice just takes the song to another emotional level.

Trisha Yearwood took The Song Remembers When to number 2 on the country charts back in 1993. It’s a beautiful song by any standard and one that anyone who has ever loved will relate to; where the unexpected sound of some specific music takes you back to a particular time and place in an old relationship, pulling some long-buried, lost potential into focus for one powerful moment. At the risk of repeating myself, it’s Rumer’s vocal style allied with Mollin’s production approach that sets this new recording of this vivid song apart. They’ve kept it simple – simpler than Trisha’s original – and that gives time and space for the listener to catch the echoes from their own memories. It’s masterful in both the writing and the delivery.

Any concerns that Nashville Tears is overladen with sorrowful ballads can be set aside. Deep Summer In The Deep South is a steamy toe-tapper dripping in the hot, humid imagery of youthful love and lust. Bristlecone Pine features the talents of Lost Hollow, and is a soaring, folk-tinged reflection on the relatively fleeting span of human life. The Snow White Rows Of Arlington is a farewell to family from a soldier headed to war, knowing they might never see each other again this side of the grave. It’s a very patriotic, and quite militaristic, song and yet, in the hands of an English woman, it takes on a different character. Hard Times For Lovers, one of Prestwood’s earliest hit songs, is picked up from its late 1970’s origin and dusted down with a bright, modern, easy-feeling pop style. If you listen back to Judy Collins’ original, it’s almost a different song.

I’ve been fortunate enough to have a review copy of Nashville Tears for a few months now, after the original April release date was pushed back due to the global pandemic – and I do mean fortunate. In the whole sh*t storm of a year that 2020 has been, there have been times when this album really has been an oasis for me. There are 15 songs on the album, and I find a new favourite each time I listen to it. Quite simply, they’re all beautiful songs fantastically well rendered, packed with emotion and sensitivity. Whatever its origin story, Nashville Tears is surely one of the most finely crafted albums of the year.

Rumer – Nashville Tears is released on 14th August. Various bundles, including signed albums, are available direct from Rumer’s online store.  Also avaiable through the usual retailers and streaming services. Rumer will be touring the UK in 2021, tickets available here. 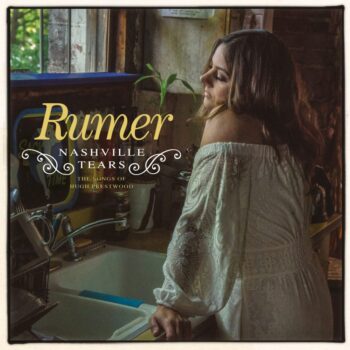 Recommended Tracks
The Fate Of Fireflies, Hard Times For Lovers, The Song Remembers When, Ghost In This House

Six Shooter Rating
9 out of 10