When you listen to the first song on an album and you go, ‘Wow!’ and then your other half comes in and says, ‘Who’s that?’, you know you’re going to be onto a winner.

And so it is with Caylee Hammack’s debut album If It Wasn’t For You, released today (Friday, August 14) via Snakefarm Records in the UK.

A full 13-track collection makes a welcome change from the raft of EPs that seem to have been spawned by lockdown restrictions.

Caylee has co-written and co-produced every track on the album, which she describes as “airing her dirty laundry…in the hope of others feeling that honesty and vulnerability, and in it, finding a safe haven to be themselves”.

Working with co-producer Mikey Reaves, she’s certainly ticked those boxes. The raw emotion strikes right through to your heart and she has brought in some pretty heavyweight co-writers too, including Hillary Lindsey (fellow Georgia native and the wordsmith behind such hits as Carrie Underwood’s Jesus, Take The Wheel and Little Big Town’s Girl Crush), and Natalie Hemby, also one quarter of The Highwomen.

Among the songs wrapping up heartbreak corner is Small Town Hypocrite, the story of a girl giving up her (and her daddy’s) hopes and dreams of a scholarship for an ultimately lost love and life in a small town with a picket fence. ‘The bridges that I burned and the trains I didn’t catch’ – haven’t we all been there at some stage?

I’m getting ahead of myself however, I should be starting with her new single Redhead; inspired by an older cousin with fiery red hair, the accompanying video is a peek through the window into the (apparent) trials and tribulations of bringing up a redheaded daughter. See the album cover for Caylee’s own dip into redhead heaven.

Justin Clough directed the video and there are so many lovely touches, not least the tributes to Reba McEntire, whose sassy ‘girl, I know’ contribution adds a special something. According to Caylee, Reba “transformed” the song and she has richly paid her back with Reba posters and pictures in the little girl’s bedroom and, of course, the t-shirt she wears with a Fancy* logo as she sings with her hairbrush mic into the mirror.

There are plenty of standout songs on the album – Preciatcha (say it out loud to yourself a few times) is a lively co-write with Jordan Schmidt and Laura Veltz. The songs Family Tree (her first single) and Sister have their roots in Caylee’s oft-described family life growing in small-town Georgia, and I love the lyrics:

We got more love than we got money,
But it don’t matter
‘Cause the roots run deep
Aint nothing gonna shake our family tree

The poignant Forged in the Fire reflects the emotions of losing almost everything in a fire, but still finding the quilt her grandmother made and the fighting strength she needed to become a phoenix rising from the flames.

Mean Something sees Caylee blend her soulful tones with fellow singer/songwriters Ashley McBryde and Tenille Townes, a move that works superbly well and asks a few timely questions with the lyrics:

Gold, the haunting penultimate song on the album is also the shortest and features the title of the album If It Wasn’t For You – you can feel the pain – and very neatly those words segue straight into the start of the final song New Level of Life, something of a heartbreak recovery anthem with the words ‘If I want it, I’ll get it’– sounds good to me.

The more I listen to this album, the more I like it and, given I was starting from pretty high up the likeability scale, it’s doing pretty well. To paraphrase her own song, I love music with meaning and think Caylee has pretty much nailed this one.

*Fancy appeared on Reba’s 1990 album Rumor Has It 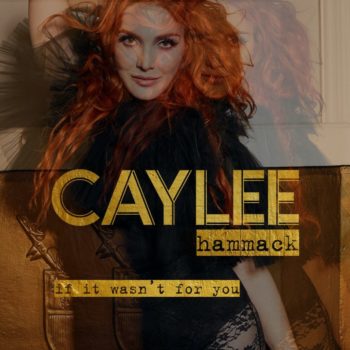 Six Shooter Rating
8 out of 10