When Max Lewis went on stage to sing with Scotty McCreery during 2019’s Country Music Week last October (remember those things called gigs?), it triggered a chain reaction which will soon culminate in the creation of an album from music charity Electric Umbrella – with a little help from Nashville’s Kyle Daniel. 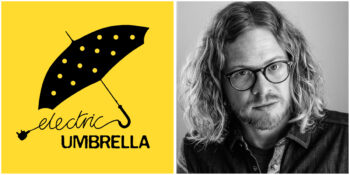 Electric Umbrella (EU) focuses on challenging perceptions about people with learning disabilities and enriching and empowering lives through music. Adapting to lockdown, it launched EUTV online, transforming the number of people it can now reach both in the UK and around the world.

One of its summer projects has been a new album entitled ‘The Lockdown according to Electric Umbrella‘, with members of the EU community joining songwriting sessions via Zoom and contributing their own words and ideas.

Recently, thanks to Max, singer songwriter Kyle Daniel joined them live online from the US to add his own very special songwriting talents into the mix.

The occasion happened after Kyle spotted a video of Max and Scotty on the C2C Attendees Facebook page and asked friend and fellow Attendees group member Jan Thulborn to put them in touch.

Passionate about helping those with disabilities, Kyle then revealed that one his oldest friends from kindergarten days is John Michael Huffman who, like Max, has Down’s Syndrome.

Kyle explains: “My Mom always said that I have a big and caring heart for people who are different. Even as a kid I knew John Michael was a very special person, I built a relationship with him and I feel so much love and energy from him that I think my soul gets filled from John Michael more than it does with any other human being.

“I have helped all kids with disabilities and specifically those with Down’s Syndrome, so when I saw Max’s video, I said I’ve got to meet him.”

Max’s dad Paul Lewis takes up the story: “When Kyle wanted to meet Max it was really funny, because usually it’s the other way round, it’s Max who wants to meet all the stars.

“Kyle has a real passion for people with special needs and he still really cares about his friend, so we started corresponding and were due to meet at C2C this year.”

With plans cancelled because of the pandemic, instead Kyle, Max and Paul have been busy talking online, and it was during one of those sessions that Paul mentioned Electric Umbrella.

Paul continues: “Kyle thought EU sounded amazing and he watched the zoom sessions several times, so I connected him with Tom Billington, EU’s artistic director, who by then had started the idea of a lockdown album.

“Max requested a country song on there and that led to Kyle coming on board for a writing session.”

One Thing Leads To Another

Max has been a member of the EU community for the last three years. In 2018, the EU team brought to life his creative vision of a pop-opera called ‘I am the Dream Machine’, performed at Watford Palace Theatre and then released as an album.

The music proved so popular it became the background to many of EUTV’s sessions during lockdown, striking a particular chord with Kyle, who loved its catchy style.

Tom, who is also a musician and one half of country duo Billington & Quinn, said: “The first album was how we got to know Paul and Max. It was Max who gave us the idea and the inspiration to write the musical and it was all based on his ideas and his diary.

“It’s been very, very successful, all the songs are really singalong and when we came into lockdown we used it more than ever, it became the soundtrack to this period and our Covid-19 response.

“We then said we should write a second album – the lockdown album – and we’ve spent one session a week doing EUTV songwriting workshops.

“We’ve also had EUTV spotlight guests, including Tony Hadley and Toyah Wilcox, but Kyle couldn’t be a guest because of the time difference; so instead we said why don’t we get him to do a songwriting session.

“It was totally through Max, he had invited Kyle to watch some of the things we were doing and he totally got it and understood it, he felt it was something he could really get behind and was able to come on and share it.”

The zoom session saw Kyle interacting live with everyone in the EU community who tuned in, writing down their suggestions for lyrics in realtime, crafting the words and the music into a song as they watched on screen.

“Having that very authentic country American sound was really great for all of us to see,” added Tom. “With songwriting, you’re taking a starting point, a load of information and you’re whisking it around and seeing what comes up.

“The session was very similar to how we would have done it here, but this time it was Kyle in the hotseat instead of me. What was nice for me, was that I know what I would do with this or that ingredient and he did something different with it, which was really interesting.”

Since the session, Kyle has been working with Tom to take the song to the next stage and says taking part has been making a part of his dreams come true.

“I was super-bummed when Max and I couldn’t see each other at C2C and I made sure that we had some FaceTime together instead,” he continued. “When Paul posted about Electric Umbrella and what they were doing, I watched and just thought it was brilliant – I was smiling from ear-to-ear.

“I always said that if I have any amount of success in the music business and enough money, I want to create a programme which could teach kids with disabilities a way to express themselves through music, dance and the arts.

“Tom was literally doing what my vision was and I thought it was the greatest thing I’d ever seen, so I wanted to help and I am really grateful that I’ve even had the chance to be just a little piece of it.”

Recording the album, which features everything from country to EDM, dance and latin pop music, is due to start in September – also featuring members of the EU community – and it will hopefully be ready for a virtual launch in late October.

As the project nears completion, the final word must come from a delighted and excited Max, who describes the whole experience: “It was phenomenal. Kyle is wonderful to me and all the EU people – his commitment and his work ethic, his charisma and the way he explored and is helping us to achieve something was wonderful.”

And as to how he felt when Kyle asked to meet up with him on his next visit to the UK, Max sums it up as “unstoppable”.

Well done to Max, Kyle and all the EU team.

Described as a writer, creative force, director and actor – Max has a jam-packed CV, with successes including acting roles in the film “Notes on a Scandal” with Dame Judi Dench and Cate Blanchett and on stage with Chickenshed inclusive theatre.

Well-known for his appearances at C2C wearing his sparkly red cowboy hat, Max came to country music via his Dad Paul’s love of the genre, and his favourite “American Idol” TV programme, which launched both Scotty McCreery and Carrie Underwood to mega-stardom.