Tim McGraw Discusses His Latest Album With The UK Media

Our writer Sally Maybury had the pleasure of joining multi-award winning Tim McGraw online for a special UK press conference to talk all things about his latest album ‘Here On Earth’. 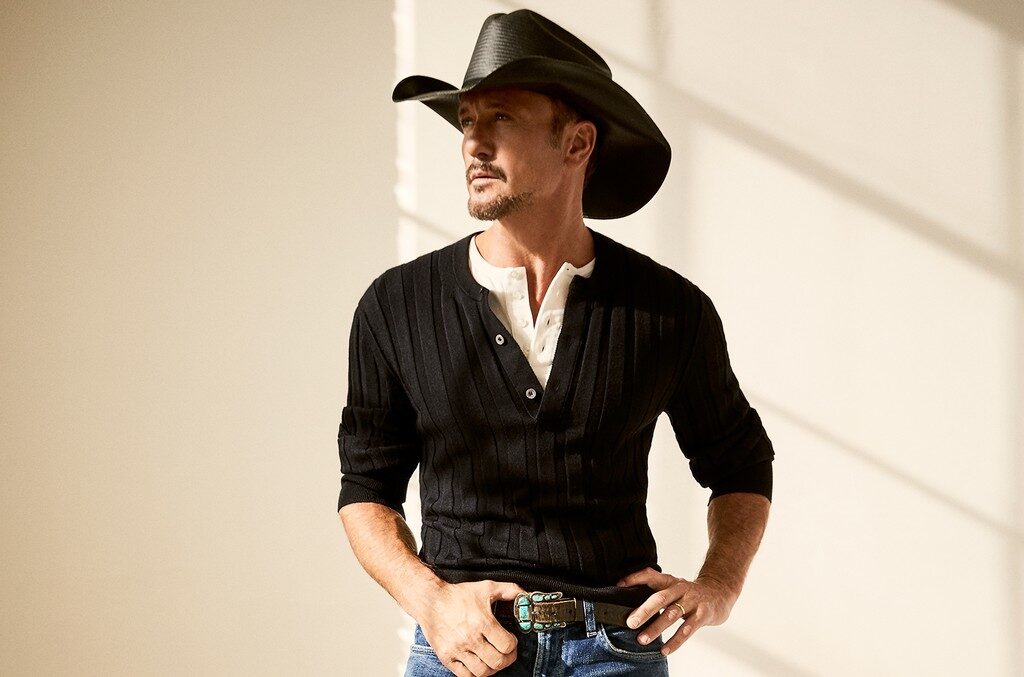 Tell me about the album listening party you had?

It was a lot of fun, I had to sign a bunch of things at the office and I had no idea anything was going on, the vinyl had just come into the house that day, so when I got home Faith had ordered a turntable and lights and things were all prepared. It was the first time we’d put on an album and listened to it all the way through, it may be the first time my kids have ever in their lives listened to more than one of my songs at a time. It was a fun night I really enjoyed it and was surprised by it, we all had a great time hanging out and dancing along to it.

It seems that they like it, it’s one of the few times I can hear my kids going around singing one of my songs so that’s a pretty good sign! But if she catches me listening then she stops singing!

When I first put the CD in I immediately got this Glen Campbell vibe with the arrangement and the music. It got me thinking, how much do you listen to the classic artists that led the way vs modern music now? And what’s exciting you at the moment?

For me, I still live in the past when I listen to music, 70s music is the music I grew up on and some 80s too. My go to is old country music, the stuff I grew up on, The Eagles, their Greatest Hits is one of my always go to albums. I’m a big Phil Collins fan so I’m always listening to his stuff. New stuff now, I hear the radio and hear the contemporary stuff but a lot of the times I’m riding in the car with my daughters and listening to whatever they’re listening too, which is kind of cool because I think they grew up listening to stuff that we like. For instance, I got in the car the other day driving across country and my youngest daughter was listening to Linda Ronstadt’s Spanish album for about 3 hours of that trip, and then we’ll listen to an Adele song, then an old Merle Haggard album. Its pretty all over the place what we listen too!

What does your mum think of the track ‘I Called Mama’ and what’s the best piece of advice she’s ever given you?

My mum has given me a lot of advice, wanted or not! My mum has always been very close to me. She’s the artwork, the cover of that single is a picture of her in high school, right before she found out about me, so I sort of wrecked her senior year! But I sent her the song and I got a bunch of crying emojis back!

That song grew in a different way for us, as when we first recorded that song it was certainly about something hitting you hard in life and going to who your backbone is in life and for most people its their mum. But then as the world changed and we were mixing up and finishing the song it really became about a bigger thing, more about who are the main people in life, who you can count on, lean on in times like this when things are crazy and the world seems to be spinning out of control. More importantly it made me think of who are the people that look at you as their rock when times are crazy and can you be there for them.

You’ve been working on this album over the past few years, how different was the process compared to previous ones, especially over the last few months with lockdown and quarantine?

Well luckily we got most of it done before lockdown started happening, it was a longer process. I started recording the album during the end of our Soul2Soul tour because we recorded our first duets album, and so I started writing and recording at the end of them. It was about collecting the songs and then stealing moments away to go and get them recorded when I could.

Another thing we did, that we wanted this album to have a little depth to it, we recorded it analog and then transferred it all over to digital. The old fashioned way! I think that gives it a little more weight and depth to the music.

Which of the new songs are you most excited and looking forward to performing in front of your fans?

I have to say the first song on the album, L.A., is probably one of my favourite records that I’ve ever made. I just love the sound and feel of it, I love singing it, I love the strings and it has that Glen Campbell vibe, it reminds me a lot of those Glen Campbell and Jimmy Webb songs from back in the 70s, that’s one I really look forward to playing live.

Then Chevy Spaceship will be great live, just because of the visuals that will go along with that.

But L.A. is my favourite record.

You’ve had so much success but it has been 5 years since your last solo record, I wondered despite all that success if you still had a sense of anxiety or nervousness with bringing out this new record?

Absolutely, every time you make a record, you’re confident with it because it’s your music and you did it the way you wanted to do it, but you never know how people are going to accept it. It’s all fine and good when you’re working on it, and putting it all together, but when it finally comes to letting it go there’s a lot of nervousness and anxiety about it. About whether it’s going to be accepted, especially in this record for me, there’s so much heart and effort and thought that went into this album and you want it to translate.

You performed at The Bluebird last night, what does that venue mean to you and the genre as a whole?

It’s certainly a famous place, and its been around for a long time, some of the greatest songwriters and artists to come out of Nashville have played there, its still fun to go and watch some of your favourite songwriters play, and its not too far from our house. So every now and again we sneak out and get to see somebody that we like. The most interesting thing about it is it really is where Faith got her start. Faith was singing with harmonies with Gary Burr, and Warner Brothers record executives happened to be in there that night and wanted to know who the pretty background singer was, and that’s how she got her record deal. We drive by it nearly every day, we’ve taken our daughters in to see some of our favourite songwriters, anytime Lori McKenna is in there we try to make it.

You said about recording the album during lockdown, are there any songs that stand out more to you now than they originally did? Songs that you think perhaps have a deeper message now?

I think Here On Earth, the title track is probably the main one that really stands out the most, and Hold You Tonight as well, just because that song for me is one that I look at from a different perspective. I look at it from the long haul, being married for nearly 24 years, and being in our 50s and kids growing up and moving away and the way life changes as you get older, that’s what that song means to me, in the midst of all this happening. But what we did do is we had mixed most of this record before the pandemic, so we brought back a lot of these songs and re-looked at a lot of the mixes, to make sure their emotional tones were right, we wanted to make sure we went back and change it a little, to make sure we were in touch with our emotions in the same way we were when we mixed the album to start with. And we did change a few mixes when we re-looked at the record.

Thank you for the rich and diverse album, there’s a few songs that have really taken on a life of their own over here – Hold You Tonight and L.A. to mention a couple. The other song is Sheryl Crow, we were intrigued as to why you recorded that?

It was funny because Taylor had her Tim McGraw song, and now I’ve got the Sheryl song, if we could just get Sheryl to do a Taylor song we can complete the circle! I just loved what it said, I loved using music to put you in a time and place of a relationship. As a guy we’re always trying to figure out a way to tell your woman you love her, and just say it in a way that this is what you mean to me, this is what your memory means to me, to say it in a way that used Sheryl Crow’s music as a way to explain it, seemed a pretty cool thing to me. Besides that when we dug into the record and started playing and putting the grungy guitars in there, it really resonated to me as a musician and a singer, it was a song that I couldn’t wait to sing every night on stage.